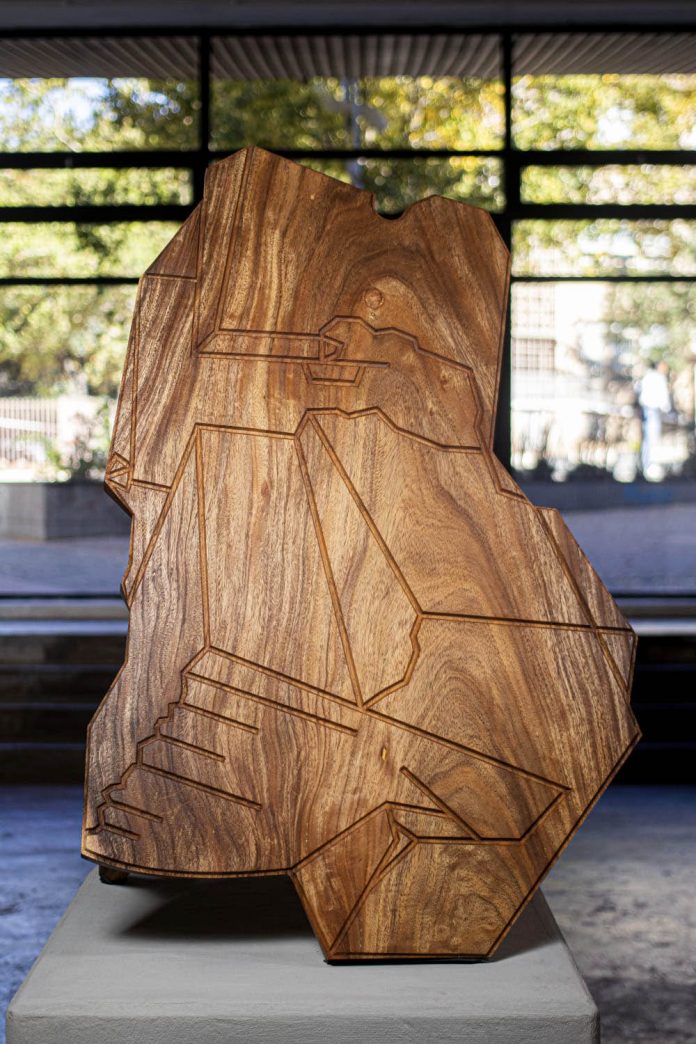 It is a great relief, in this age of righteous quackery and moral breast-beating, to encounter an artist who doesn’t give a damn about toeing the line. Amber-Jade Geldenhuys’s solo show at Point of Order, University of the Witwatersrand, is anything but a call to order.

Titled I Give Rocks, its attitude announces a clear and present danger — that Geldenhuys simply does not care. For what? Why rocks — non-nutritive, stone-cold, unyielding, and for those many sensitive souls among us, cruel? But then rocks are not just building blocks or crazy paving. They do — despite their unyielding disregard for all that is mortal and human — return us to the arid stony fact that we are dust, flecked shale, chips off the old stone block, as much defined by nurture as we are by austerity.

This is Geldenhuys’s point. Here, art is emphatically austere — and most strikingly so in her upended tables with their uneven jagged surfaces, bizarrely enlivened undersides, twisted legs. There is a reason for this. Her tables are not tables, in so far as they can be understood as functional objects. Rather, it is their fuck-you dysfunctionality that stridently announces itself.

In the domain of design, sleekly economic functionality is the Holy Grail. No one cares for chandeliers or any other top-heavy, overly ornate garbage from a bygone era. In his 1908 essay, Ornament and Crime, Alfred Loos declared: “Absence of ornament has brought the other arts to unsuspected heights.” Which art? The art, and design, of functional objects.

But a sleek economy — epitomised by the Braun Razor, on which Ridley Scott modelled his spaceship in Raised by Wolves; in fact he raided the kitchen for all his sci-fi designs — is not the final arbiter. As the controversial design thinker, Bruce Mau, declared: “I’m sick of modern design. I’m fed up with corporate cool. I can’t bear to see one more ‘continuous surface’. I’ve had it with perfection. I hate clean lines.”

Geldenhuys sits somewhere between a rock and a hard place. Whatever that point, or place, is, it’s not comfortable, never complacent. Her tables — her greatest innovations to date — straddle the eloquence of continuous form, then shatters it. She brokers a fresh idea, which Deyan Sudjic, author of The Language of Things, describes as an entirely new category of object.

Geldenhuys not only distorts an existing form that defines the modern home par excellence, as a situationist, she deterritorialises its reason for being. Geldenhuys’s tables are hurled, upended, “thrown”, in the sense of throwing clay, or hurling a Molotov cocktail. Her tables are incendiary.

I have spoken of design, when Geldenhuys makes art. Is there a difference? Isn’t art a different order of functionality? Art stands or hangs just so, after all. Geldenhuys takes grey rubber matting, laces it with gaudy ribbons, hacks the whole into non-gridded organic forms, splices a backing and shoves it on a wall. But then, as the American poet, AR Ammons reminds us in Corsons Inlet, nature abhors clean lines.

Where things go, their designated uses, are now awry. Everything, after all, is now art. Scandal or shock is long passé. This is the age of perpetual experiment, a rage against George Orwell’s machine of dogma — those breast-beating righteous quacks I started out with. It is in this alienated and alienating vanguard that Geldenhuys now belongs. The game is afoot. At this juncture, this point of order, disorder, elegantly disported, announces itself.

Amber-Jade Geldenhuys is an artist working with sculpture, installation, and printmaking.  Exhibiting regularly since 2008, Geldenhuys has been awarded a number of prizes including an Absa L’Atelier Merit Award in 2011, a Mixed Media Merit Award at the Ekurhuleni Thami Mnyele National Fine Arts Awards in 2010, and first prize at the PPC Cement Young Concrete Sculptor Awards in 2009. She is working towards a solo show at The Point of Order in April 2022.