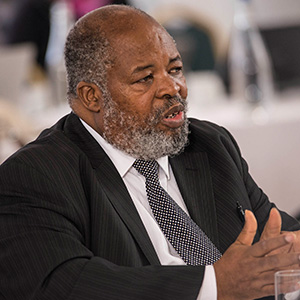 KwaZulu-Natal high court deputy judge president Mjabuliseni Madondo was not recommended for appointment to head of the division on Friday after he was accused of homophobia and a breach of the judicial code of conduct in his interview with the Judicial Service Commission (JSC).

Madondo denied the charge, put most strongly by speaker Nosiviwe Mapisa-Nqakula after commissioners cited his recent religious writings in which he interpreted the teachings of the Old Testament in Corinthians on homosexuality as a deadly sin.

He was the only candidate to replace retired KwaZulu-Natal judge president Achmat Jappie, and the position now remains vacant.

In the fraught discussion, Madondo explained that the views were not his own but confined to a religious context and had no effect on his rulings in an adjudicative career spanning 29 years.

The excerpts cited by commissioners Narend Singh and Kumeshni Pillay were quoted out of context, he protested, and a proper reading would make plain that he deemed the biblical punishment imposed on homosexuality as extreme, even in a historical context.

Chief Justice Raymond Zondo asked Madondo to give the commission the benefit of knowing what his personal views are.

He replied that it was clear even from his 2019 book that “I am not of the view that homosexuals should be killed.”

Madondo referred to a passage where he ventured that “homosexuals face a difficult battle” but that in faith mercy was always possible, citing verses from both testaments to illustrate the progression to a gospel of redemption though repentance.

“So this thing should not be distorted as though I am attacking homosexuals. It is an issue which is discussed under the religious sphere and to say I may appear as homophobic, that is not true.”

He continued: “We have different people in this country believing in different religions. I am not against any homosexual whatsoever. And it is not for me to say whether it is a sin or not, it is for God. But I would not penalise or jeopardise somebody for what he does or whatever he believes.

“I am always wary of not imposing my creed on society. I also make a clear distinction between my religious belief and my judicial perceptions. I am also aware of the fact that my belief cannot be those of the society at large, and that there is a personal creed and the creed of the nation.

On the bench, he added: “I am critical and restrained in my view and respect the shackles that bind me as a judge.

“So what is happening here is just an interpretation of the Bible for people who want to follow God, because if God says this is wrong it is wrong … It is not for me to condemn those people.”

The explanation did not satisfy Mapisa-Nqakula.

“One of the things that concerns me, it is your entire outlook, which you claim is based on your religious beliefs as contained in the Bible, and I have a problem with that. I don’t think it is something we can discuss now but I do want to say it is problematic.

“I have a problem with a judge who will sit there and espouse and push an angle that talks to one religion in his outlook when we all know that you believe in a constitution which is secular, which talks to South Africa as a secular state.”

She said she wondered what would happen if he were presented in court with the dissolution of a a same-sex civil union and had to adjudicate a conflict embroiling the parties.

“How will they have confidence that issues they raise with a judge who has written a book which seeks to portray their conduct and behaviour as demonic, how?

“There is this intolerance which is coming out which I do not believe South Africans should allow in 2022.”

Justice Minister Ronald Lamola asked Madondo whether he believed that his writings helped to send a message of tolerance and diversity to society as a whole and to protect the LGTBQ community against violence.

Commissioner Sesi Baloyi quoted from the section seven of the judicial code of conduct, which bind judges to avoid at all times “personally avoid and dissosociate him or herself from comments or conduct by person subject to his or her control that are racist, sexist or otherwise manifest discrimination in violation of the equality guaranteed by the Constitution”.

She said though he was quite entitled to his personal views, it had to be asked how his writings did not fall foul of the provision. Earlier Pillay had said Madondo’s views came across as homophobic and in breach of the code.

Madondo replied: “That is not what I believe, what is interpreted there is what the Bible says. So there is no intention whatoever to insult or to denigrate anybody and even these things that are said are just quoted out of context as if I am condemning homosexuality.

“I indicate also where I have a different feeling about it. So it is not something I say I am adhering to it.”

He added that he believed that there was no need for a lengthy religious debate on the subject.

In reply to the speaker’s concern, he said he handled same-sex divorces in the same manner he dealt with every other case and had never heard a complaint that he had done anything untoward because of his faith.

After Zondo said he believed the subject had been exhausted Mapisa-Nqakula added,“This is a statement I want to make unequivocally: you are homophobic and in South Africa in 2022, it is just unbelievable. For the record.”

Madondo’s interview carried an echo of the running controversy about the fervently-held religious views, and dubious pronouncements on homosexuality, of former chief justice Mogoeng Mogoeng, who insisted in the face of sanction that the code did not bar him from expressing these publicly.

Mogoeng, too, had been adamant that his personal views did not affect his application of the law.

“We find his stance extremely problematic, especially his insistence that there could be a separation between his personal views and his views as a judge. As several commissioners made clear, article 7 of the judicial code of conduct requires judges to actively disassociate themselves from any comment or conduct that advances discrimination.

“This would definitely be a case that the Judicial Conduct Committee would investigate and there is a risk that he would be found in breach, especially in light of the recent finding where chief justice Mogoeng Mogoeng was found guilty for far less.”

Madondo’s replies to other questions on other subjects reflected a thoughtful judge committed to remedying the logistical problems hampering the administration of justice in the division.

The list was long and included electricity blackouts, with no generator as back-up, poor wi-fi and a woeful lack of legal research material. Courts were often able to sit only for two hours a day and the maintenance performed by the public works department was so poor that repairs only held for a day or two.

“If we don’t have the tools to perform our work what kind of result is expected at the end of the day?” He asked rhetorically early in his interview with the JSC for the post of the judge president of the division.

Madondo stressed that KwaZulu-Natal had too few judges for a growing population and needed at least three more, adding that he was concerned about the well-being of the current complement as they were constantly overwhelmed with work.

“You can’t expect a smaller number of people attending to greater work and be well throughout,” he said, adding that he had raised the matter on a national level but to date nothing had been done.

Moreover, the courts were unnecessarily inundated with traditional disputes because the country needed a clearer legislative framework to deal with issues such as communal land.

The week’s interviews, the first chaired by Zondo since became chief justice this month, saw David Unterhalter SC, considered one of the finest legal minds of his generation, overlooked for recommendation for appointment to the constitutional court for the third time in a year.

He was left off the list after conceding that he had, while acting at the constitutional court, formed part of the quorum that dismissed an application for leave to appeal in a matter where he was party to denying the same at the supreme court of appeal.

There are varying degrees of sympathy for Unterhalter, who apologised for what he termed a case of human error, among his peers, and at this point it is moot whether the decision will see a legal challenge. But it again raises the question as to whether the JSC’s selection process should become transparent. There is legal precedent for it to be compelled to explain its reasoning when this results in leaving a position on the bench vacant.

Baloyi, the new spokeswoman of the JSC, said the decision regarding Unterhalter was settled by a majority vote and the reasons would be set out in a confidential report by Zondo to President Cyril Ramaphosa. The president will only be able to fill one of two vacancies at the apex court because the Constitution dictates that the JSC needs to give him three more names than the number of vacancies.

Since there had been only five candidates he will choose between judges Owen Rogers, Mahube Molemela, Fayeeza Kathree-Setiloane and advocate Alan Dodson