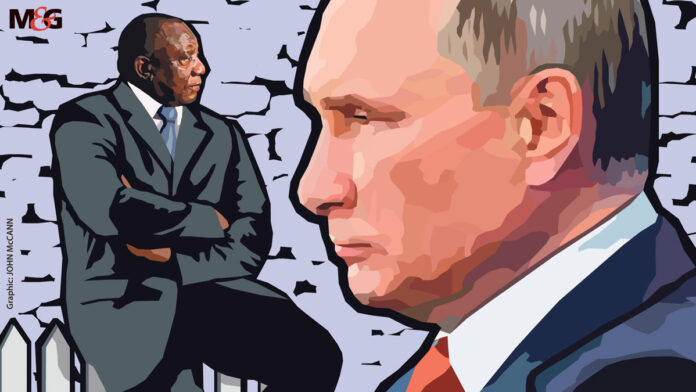 Russia’s invasion of Ukraine is a rude reminder of how deeply interconnected the global economy is. It has also underlined the fragility of global stability and the multilateral institutions that underpin it. It shows that the interplays of power reign supreme and the strongest can run roughshod over the weak in ways that undermine international law.

The global climate of tension among major powers creates grave uncertainties about the future state of the global system and whether the rules-based international institutions can withstand the pressure. This fraught environment also raises questions about where countries like South Africa, and broadly the African continent, should position themselves in what could become a widening international conflict fuelled by geopolitical rivalries.

Many countries condemned Russia’s invasion of Ukraine. Only 17 countries, including South Africa, adopted a neutral posture. South Africa explained that it had been called upon to act as a mediator. It is not clear what precise mediation role South Africa will play that is missing from France, Israel and Turkey, the three countries shuttling between the warring parties and creating a bridge with Western powers. It does not seem that South Africa’s mediating role has the blessing of all the interested parties in the conflict.

South Africa further rationalised its decision by pointing to Russia’s perceived sense of vulnerability from Nato’s eastward expansion, essentially playing into Russia’s narrative for invading Ukraine. Others have also used the grand narrative of great power rivalry to explain why Russia is justified to attack Ukraine in peacetime.

No doubt, Vladimir Putin has often felt frustrated by what he perceived as the United States’ hostility to his grand vision of rebuilding Russia as a preeminent power in the post-Soviet geography. His fear has always been that the post-Soviet states that are gravitating to the West could be used as a bridgehead to attack Russia or undercut its rise.

The Russia-inspired Eurasian Economic Union, which includes Armenia, Belarus, Kazakhstan, Kyrgyzstan and Russia, is one of Putin’s political instruments. This platform has enabled Russia to stamp its authority in its region by drawing former Soviet states into a tight economic union that would dissuade them from joining the European Union.

Putin does not consider Ukraine as just any country in Russia’s backyard, but as its core interest and a fragment of its history dating back to the mid-17th century. Many Ukrainians in the eastern part and Crimea speak Russian, a geographic and linguistic construct Putin uses to whip up nationalistic sentiments in Russia and as a cover for his imperial designs in Russia’s neighbourhood.

If this sort of linguistic and historical justification were to be allowed in international law, any country can dig up historical narratives, distort them, and use them as a basis for invasion.

South Africa’s lack of moral compass in not condemning acts of aggression and international law violations should frighten its neighbouring countries.

Southern Africa, historically, has had a similar experience, although the facts were entirely different. The equivalent of perverse use of geographic contiguity and an exaggerated sense of external danger was South Africa’s attempt to forge a Constellation of Southern African States under then president PW Botha in the late 1970s.

This constellation was an imperial scheme by the white minority regime that sought to draw countries like Botswana, Lesotho, Swaziland, and Namibia; and former homelands such as Transkei and Bophuthatswana into South Africa’s orbit through a shared political, security, and economic framework.

This perverse strategy was designed to counter Russia’s support for the liberation movements and delay the road to freedom in various Southern African countries, including South Africa.

Despite enjoying the support of prominent business leaders such as Harry Oppenheimer, who referred to the stratagem as an act of “charm and imagination”, Botha’s imperial project failed dismally. The apartheid regime in South Africa at the time lacked legitimacy because other countries did not trust it. Instead, it inspired the establishment of the Southern African Development Community as a counter-force and a lightning rod for national liberation in countries that were under the grip of tyranny.

Russia today has limited social legitimacy among Eastern European countries that still have nightmares about life under the Soviet empire. These countries desire liberty and economic prosperity, which they want to realise through association with the European Union rather than Russia’s alternative Eurasian Economic Union. Countries such as Poland, Lithuania, Estonia, Latvia, Romania, and Bulgaria had fared better since they joined the European Union than under the Soviet empire.

Some observers have seen Russia’s invasion of Ukraine through great power rivalry rather than the lens of international law. Great power rivalry should be seen as an anomaly rather than something we should take as a given. It is also a poor basis for rationalising an attack of a smaller country by one with preponderant military and economic power.

We should remember that it was the rationale of great power rivalry that led to Britain’s invasion of the Cape Colony in the late 18th century, and its occupation of Simon’s Town as its naval base to thwart the Dutch and any great power that would emerge.

Keeping quiet in the face of aggression, as South Africa has done, is a disservice to history and a blot on the country’s long-standing commitment to international law. Ukraine is a sovereign state that should enjoy protection under international law as enshrined in Article 2 (4) of the United Nations Charter.

It is possible to condemn Russia for the specific act of aggression while staying non-aligned in the grander geopolitical rivalries between the West and Russia. For example, many countries condemned the US and the United Kingdom for invading Iraq in 2003 because this was a clear act of aggression. Those countries that condemned the West during that war were not pro-Iraq but pro-peace.

At the height of the Cold War in 1961, many newly independent states in Asia and Africa constituted themselves into the non-aligned movement, which sought to avoid the tensions between the US and the Soviet Union. These countries would condemn acts of aggression whether they came from the West or the Soviet Union while staying broadly non-aligned.

Apart from the explanation that South Africa’s membership of the Brics  bloc (Brazil, Russia, India, China and South Africa) played a role and that it was called upon to mediate, there are possibly other factors that may explain the country’s fence-sitting approach.

The first is the exaggerated image of Putin as a strong man who should not be offended even when he breaches international law. The second is that Russia represents an historical ally of the ruling party, the ANC, and there are party-to-party relationships between the ANC and United Russia, Putin’s party.

Russia under Putin is fundamentally different from what existed during the Cold War. Even Putin is loath to invoke any historical connections to that era. Today’s Russia is more right-wing than the communist Russia of the 20th century. There are also no ideological affinities between United Russia and the ANC — the former is conservative and nationalistic, and the ANC is more social-democratic in its outlook.

Yet still, South Africa must stay committed to international law and the protection of territorial integrity while guarding its foreign policy independence on broader geopolitical tensions between the West and Russia where there are no clear angels and demons. If South Africa sounds half-supportive of Russia, it risks being used by Putin and Russia’s overworking information networks. The damage to South Africa’s global profile could be irreversible.

Dr Mzukisi Qobo, head of the Wits School of Governance at the University of the Witwatersrand, is the author of The Political Economy of China-US Relations: Digital Futures and African Agency