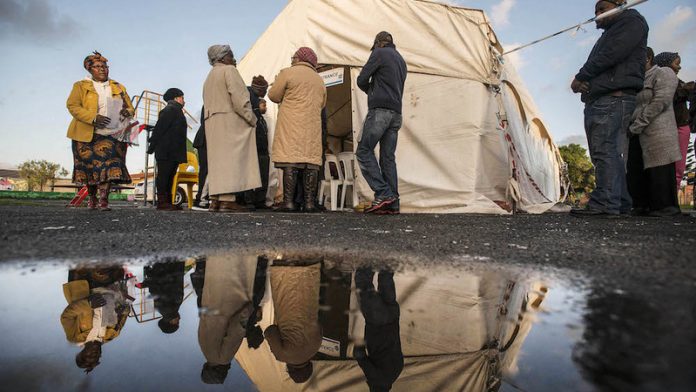 The Electoral Commision of South Africa (IEC) says that it is ready for the by-elections, which will take place in 95 wards across 55 municipalities in all South Africa’s provinces.

These elections are the first to be held since they were suspended in March because of the Covid-19 pandemic. Chief electoral officer, Sy Mamabolo, says that these are a “catch-up” of all by-elections postponed between March and September. Elections could not take place because of the hard lockdowns put in place to protect people’s lives.

More than 20 000 voters have been approved to cast a special vote, which will begin tomorrow. Overall, at least 600 000 people are registered to vote in this election.

Mamabolo said that voters who might show Covid-19 symptoms will  “not lose their right to vote”, and measures in place should be sufficient to avoid transmission.

The commission will uphold the necessary health protocols to curb the virus, such as the wearing of masks and social distancing.

Voting is scheduled to take place between 7am and 9pm.

There are 455 voting stations of which 51% are in schools, 14% are in places of worship and 35% are in other structures.

The commission said that the by-elections are being contested by 40 political parties with a total of 444 candidates certified as contestants. This includes 19 independent candidates. Men make up 69% of candidates, with women making up the remaining 31%.

Former Johannesburg mayor Herman Mashaba’s new party, Action SA, will not be able to field candidates in these by-elections, because it is not yet officially registered.

Mamabolo said that, “there is no possibility that Action SA will be participating” because nominations closed on 19 October and the ballot papers have already been printed.

He said registration of a political party takes place in two stages: the first of which is the administrative process. It was during this step, which is handled by the chief electoral officer, that Mashaba’s application to register his party was rejected. Two reasons were given for the rejection: Action SA’s logo is too close to that of another party (the Party of Action); and it includes the South African flag in its symbol.

Mamabolo said that all role players, such as election staff and voters, need to abide by all the electoral laws and regulations.

“[Election staff and voters] must work with us to support and conform to the new Covid-19 protocols designed to ensure everyone’s safety. Wednesday’s by-elections are our first under Covid conditions. Unfortunately, they will not be the last. These by-elections are a test for all stakeholders ahead of future by-elections and for next year’s local government elections,” he said.

The electoral commission said that it has so far spent R3-million on personal protective equipment. However, this amount is due to increase because there will be more by-elections in December and in January.

Despite such extra expenses, the commission said that it has been affected by budget cuts instituted by the government earlier this year to move funds to fight the pandemic.

Mamabolo told the media that the commission is planning to engage with the department of finance to keep its funding at an optimum level, so that its mandate is not impaired by budget constraints.

He explained that the commission has had to adjust its plans because of the limited budget.

Mamabolo said that the commission would have loved to pilot an e-voting project in selected wards, but that this will no longer be plausible.

The results of the by-elections are expected to be announced on Thursday.