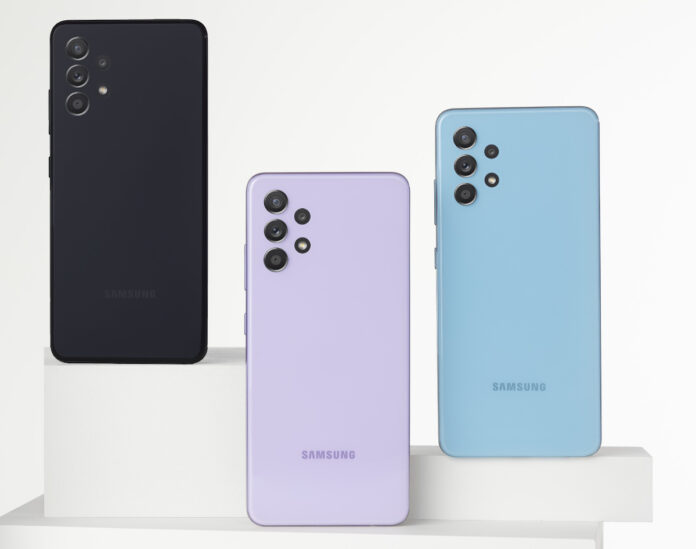 Samsung has announced the launch of the Mid-Tier smartphone Galaxy A32 smartphone, which will have LTE and 5G options for South African consumers. The new Galaxy A32 coming to market in both versions will not only make cutting-edge innovation more accessible to more South Africans but also allow users to enjoy 5G-capabilities for the first time in the Galaxy A Series. It is packed with a massive battery, multiple camera array and large immersive display; it’s undeniably a breath-taking evolution from its predecessor, the acclaimed Galaxy A31.

The Galaxy A32 smartphone offers an enhanced display and stunning new camera technology such as a 64MP rear main, which is an impressive leap up from the Galaxy A31’s 48MP version. It even adds those extra features people have asked for — up to 99 customised filters — with colours and styles you like from favourite photos.

5G Comes To The Galaxy A Series

The Galaxy A32 smartphone comes in LTE and 5G models, so users can harness the extra speeds offered with 5G, which also makes downloading a breeze. Whether playing mobile games on the go or watching your favourite programmes, super-fast network connectivity will ensure that there is less lag and peak performance, every time.

More power to keep you going

The Galaxy A32 smartphone brings uninterrupted viewing with a 6.4-inch HD+ SuperAmoled Infinity-U display, for dynamic gaming, immersive videos and multitasking in vivid clarity at your fingertips. The long-lasting 5 000mAh battery lasts two days on a single charge1, meaning you can binge-watch your favourite shows without ever missing a moment. The 15W fast-charging means you can full-charge in just 1hour 30mins that lasts two days, so you can spend more time watching and less time charging.

Capture more in the moment

The Galaxy A32 smartphone is equipped with awesome cameras that make taking that perfect shot easier than ever. Its breath-taking 64MP Quad cameras with Macros Lens and 4K UHD Video recording lets you grab 8MP still photos with a tap of a button, and the 8MP Ultra-Wide camera allows you to shoot spectacular landscape images. It also comes with a 5MP depth camera that enables you to focus on details that are important to you, and a 5MP Macro camera to reveal close-up and intricate beauty in your photos.

Design that stands out
The Galaxy A32 smartphone looks and feels good, with a design that’s comfortable to grip and elevated with a gentle glossy finish on the rear. It also benefits from our defence-grade Knox security platform and is supported by a side fingerprint sensor. This is a smartphone that puts awesome power in your hands.

“We are pleased to have built upon the success of the Galaxy A31. The Galaxy A32 5G is an outstanding new addition to the Galaxy A Series portfolio, offering customers cutting-edge innovation, including an expansive display, a hardworking camera and 5G capabilities at excellent value,” says Justin Hume, Director: Integrated Mobility at Samsung South Africa.

The Galaxy A32 LTE and 5G models are available in Awesome Black, Awesome Blue and Awesome Violet.

And now with the Samsung trade-in programme, you can get up to R1 720 when you trade-in your Galaxy A31 and up to R1 450 when you trade-in your Galaxy A30s smartphone2. Consumers can trade-in over 6 000 Samsung and non-Samsung eligible devices, such as laptops, mobile phones, smartwatches, tablets and many more. An additional R500 will be added to the final trade-in amount of the customers’ pre-owned device during a trade-in3. With Samsung, you can trade-in as many devices as you like exclusively at Samsung Stores nationwide and on the Samsung Online Store, both offering you a convenient and safe way to switch to the new Galaxy A32 smartphone. This offer is valid from 18 March to 30 April 2021. For added peace of mind, those who purchase this awesome device can protect it against accidental damage with Samsung Care + for a once-off of R993 for 12 months of protection.

1Estimated against the usage profile of an average/typical user Independently assessed by Strategy Analytics between 2021.01.20-01.31 in UK with pre-release versions of SM-A725, SM-A525, SM-A526, SM-A325, SM-A326 under default setting using LTE and 5G Sub6 networks (NOT tested under 5G mmWave network). Actual battery life varies by network environment, features and apps used, frequency of calls and messages, number of times charged, and many other factors.

2Trade-in amount dependent on condition of device traded in

Samsung inspires the world and shapes the future with transformative ideas and technologies. The company is redefining the worlds of TVs, smartphones, wearable devices, tablets, digital appliances, network systems, and memory, system LSI, foundry and LED solutions. For the latest news, please visit the Samsung Newsroom at https://news.samsung.com/za/

Creating broader value through Spending Transparency at the NLC

E-Class Coupé and Cabriolet get even more desirable