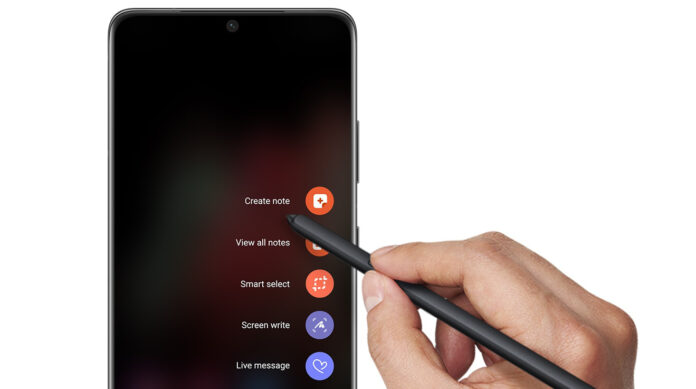 The Galaxy S21 Ultra 5G is the  first Galaxy S series model with S Pen support . More precisely, it is the first device to receive S Pen support outside of the Galaxy Note series. I’m an avid Samsung Note user, who loves the Note series for its S pen.

Samsung does not include the pen in the box for the S21 Ultra, unlike what we were used to in the Note series. If you want to use the S Pen on this phone, you have to purchase it separately.

The phone does not have a slot for the S Pen in its design, but there are S21 Ultra cases with an S Pen slot. The pen also runs out of battery in the Note series and has to be placed in the phone to charge; I wonder how this one will work?

Samsung continues to sell Qualcomm and Exynos processors in different regions with the Galaxy S21 series. The  company, which uses Qualcomm Snapdragon 888 and Exynos 2100 processors in the Galaxy S21 series, offers Snapdragon models in the United States and China, but prefers the Exynos 2100 processor in other regions, including South Africa. It’s a fact that the previous Exynos models have been negatively affected, especially the battery performance compared to the models with Snapdragon processors.

The phone I have has Samsung’s Exynos 2100 processor based on the new 5nm architecture. Working 10% faster and 20% more efficiently than the previous Exynos 990 model, this processor takes care of the three-cluster core structure. In addition to the 2.9 GHz Cortex-X1 main core, the phone completes the prime cores with three Cortex-A78 cores with 2.8 GHz frequency, and provides efficiency with four Cortex-A55 cores with 2.2 GHz frequency.

What does this all mean? Well, the pure processing power of the phone is quite high, especially the single core score, which is very satisfactory. The phone collected 1 023 points with a single core performance from the Geekbench Benchmark test, placing it at the top of our smartphone list. But these figures don’t have much meaning when it comes to general performance; the difference is not really noticeable.

The Galaxy S21 Ultra 5G comes out of the box with an Android 11 operating system and One UI 3.1  interface. Thus it is one of the most up-to-date phones in software, with 12GB of RAM. While the storage capacity of the model I have is 256GB , the phone also has 128GB and 512GB options. Since you cannot increase the memory, the 128GB model may be a problem. It is important that you evaluate accordingly during the purchase phase.

If there is something that is not missing in the Galaxy S21 Ultra, I can say that it is pure power. It’s a phone that will be liked by those who love to play games for a long time. The stereo speakers and a large, good colour-reproducing screen help when you  play games that support 120Hz native screen refresh rate. It really is a very satisfying experience. I mostly played eFootball PES 2021: KONAMI and F1 2020, and the result was pure gaming pleasure.

Does the phone heat up, you ask? Well, in practical use, you do not feel the temperature on the surface much. When playing games for a long time you can feel some heat, but most of the time I was too engaged to know when the heating really started.

The S21 Ultra has a 5000 mAh battery. With this battery capacity, you can get a full day of normal use, but when you set the screen refresh rate to 120Hz and maximize the screen resolution, you need to balance your usage. The resolution of the phone is set to 1080p when it comes out of the box; when you take  it to Quad HD, the phone may consume more power due to the difference in resolution, depending on the application you use and the time the screen is open. Still, there are gains here compared to the S20 Ultra; you can definitely play videos for longer.

While the battery performance is good, there were a few things that I did not find very impressive.

The adapter of the phone does not come out of the box, only the charging cable — so you’ll need an original adapter. For some reason, Samsung has limited the charging speed to 25W in this model. 45W fast-charging support was  provided in the S20, so in this sense, it’s a step backwards. However, at the end of the day, with a 25W charging adapter, you can charge this phone to 53% in 30 minutes and to full capacity within 70 minutes .

The cameras, oh the cameras! I was most impressed by the Galaxy S21 Ultra 5G’s cameras. One of the most pleasing things is that the focus problems of the S20 Ultra have been overcome. A laser-assisted phase-sensing element is embedded in the phone for this. This is the 5th camera we see on the back.

The second camera is 10MP and has a 240mm periscope telephoto lens, with 10x optical zoom and up to 100x Space Zoom, enabling you to examine the moon in detail. It can go further, although the shots are not very clear, of course, but it is clear that zooming in at this level is an important milestone.

By the way, it can be difficult to hit the target when zooming at such a long range. Samsung has included the Zoom Lock feature on the phone for this. When you go above 20x while taking pictures, Zoom Lock is activated and vibration is prevented to ensure that  you shoot accurately, enabling shooting as clearly as possible without using a tripod.

Samsung also includes a telephoto camera in this model, and 3x optical zoom can be achieved with it. Thus, Samsung has separated two telephoto cameras. They offer different perspectives so that instead of a hybrid solution, and both do their job very well. Shots at 30x zoom produce clearer results than previous models, especially if in a well-lit environment.

Another element in the rear camera area is the 12MP ultra-wide camera. With this camera, you can shoot 0.6x and thus get wide landscape photos.

The main camera  produces default images in the form of 12MP. If you want more detail in higher resolution, you can enable 108MP from the top. Either way, this camera produces really good results. The dynamic range is outstanding, there’s no graininess, and the white balance and colour rendition are accurate.

Another feature that prevents vibration during shooting is the Super Balanced mode that I encountered in video shooting. It produces ultra shake-free results on the move. I moved a lot in a video recording I made while using it, and the result was still very successful. The S21 Ultra also includes an 8K video recording capability

In summation, the Galaxy S21 Ultra, the top model of Samsung’s new flagship series, has brought more innovation than its predecessors — it’s one of the best smartphones available right now. — Thulani Pfende

How to survive the crypto market

Call for proposal: GIZ South Africa and Lesotho: Provision of services for commercial and legal eligibility check for financing arrangements

The liberation legend died on Thursday at a military hospital in Lusaka, aged 97
Advertising