The implications of democratised investing 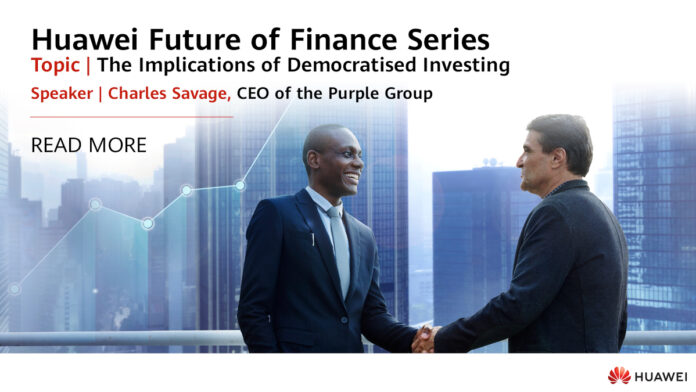 July heralded a new Future of Finance virtual event hosted by the technology company Huawei. The month’s instalment of the popular event series sought to explore the implications of democratised investing and the far-reaching effects on the investment world at large. The industry leader and CEO of the JSE-listed Purple Group, Charles Savage, was brought in to discuss this exciting topic with the charismatic host, Colin Iles.

To start the talk off, Savage was invited to talk briefly on his background and what inspired him to start the investment platform, Easy Equities. With an impressive 21 years in stockbroking, Savage was well versed in the world of investments, but he noticed that over that time, the market hadn’t shown significant growth.

This led him to ask his family why they were not interested in purchasing shares despite his position in the industry serving as a potential bridge. Their response was that the process seemed too intimidating and complex which is what sparked the idea for him to create an environment that removes the friction and complexity from investing.

Despite the fact that many platforms and technologies were built to serve trading clients, the financial services professionals over complicated the interfaces as they were built solely to cater to the sophisticated needs of regular traders; the level of complexity did not consider individuals just starting out in investment and trading.

It was in 2013 that Savage first had the idea of democratising investments. He sat with various people from different walks of life and spoke about what giving greater access to investments would look like. It was from this that Easy Equities was born — an interface that makes accessing financial markets easy. Starting with asset class listed shares and equities, the business created its own momentum, with growth between 2014 and 2018 more than meeting expectations by doubling or tripling in growth year-on-year.

In 2021, Easy Equity has one million registrations with around 50% being active, effectively quadrupling access to people in the marketplace. Savage emphasised that this is the trend globally due to advances in technology and the nurturing of an effective ecosystem. In South Africa, this ecosystem includes the accessibility of smartphones and the affordability of data. In the last three to four years the South African ecosystem has allowed access to the market at a low cost.

Mentioning the US-based investment platform Robin Hood specifically, with over 18 million customers, Savage stated that this reflects the same trend that we are now seeing in South Africa, effectively empowering customers and “taking finance out of the cupboard”.

Savage extrapolated on this transformation by stating that previously, finances were very private and were only discussed with one’s financial advisor behind closed doors. Now people are having conversations around finance in social spaces, and it is here that exponential power is coming from and where people are educating themselves.

Iles commented on the disruption to incumbents and banking institutions and asked Savage whether they should be concerned with this shift. Savage responded that 95% of the users of these platforms are first-time investors and may have pension funds or similar but don’t have an extensive portfolio.  He emphasised that this is not a “landgrab” from the incumbents due to the demographics involved in this shift. The average age of platform investors is getting younger (around 31 years old) and the gender gap is also slowly being bridged, with 59% being male.

Asset managers or unit trust organisations don’t necessarily need to be worried as their target demographic is generally the wealthier 55-year-old male. Investment choices can be based on one’s age, income group, family, career etc, and thus the need for financial services does shift when there is less time to personally manage a portfolio as well as less of an appetite for risk. Younger investors on the other hand, have more time and tend to be in a position to take on higher risks.

Savage stated that the way that asset managers provide services as well as the type of services they provide is what will change. There will be the emergence of a new asset manager that creates products and services that allows the client to act as a “co-pilot” rather than a passenger. Thus, the structures of unit trust organisations or asset managers are not likely to disappear, but the current interface will certainly disappear within the next decade in Savage’s opinion. He added that investment platforms of the future will be digital, rewarding, engaging and more affordable.

Speaking on the way that typical investors invest and what newer investors are looking for when picking stocks, Savage told Iles that the perception of value has changed. Previously, the analysis that went into these choices were financially based and numbers focussed and choosing good companies at a cheap price was the most common way.

Moreover, these new investors often buy shares where they shop, investing in items that they can touch and engage with, thereby creating the retail investor. Savage emphasised that the future CEOs of publicly listed companies will need to understand this as retail investors are changing the investment landscape where investments must have a purpose first and a profit second.

The volume of retail traders is also increasing, and Savage stated that he believes that in five years South Africa will have 25% retail traders in the market. He added that these shareholders also become share advocates and provide great value and impact in sharing their experiences. In turn retail investors are becoming shareholders and are forcing a positive change by voting out CEOs in businesses where profit is held above the health and welfare of the environment, the employees and even the customer in some instances.

Moving to the second speaker, Ronald Raffensperger, the Senior Transformation Expert of Financial Industry at Huawei Technologies, Raffensperger spoke to Savage’s point of the complexity of investment platforms being a part of a greater challenge where ICT transformation and technological advances require an upskilling of the population in order to unlock access to these technologies for the community.

Huawei’s Tech For All initiative is based on the concept of being able to raise the digital proficiency and knowledge of underserved communities. It started in a number of countries around the world, particularly in Africa, where Huawei partnered with UNESCO and local education organisations to establish “digi-schools”.  These schools will provide technologies and tools to extend education (particularly during the pandemic) remotely in addition to improving digital skills.

“People now have an opportunity to learn how to exist in a digital world. This will create jobs and improve their daily lives,” Raffensperger added.

In Huawei’s next exciting talk on 24 August 2021, they will be discussing the Future of Banking with Lungisa Fuzile, the current Chief Executive of Standard Bank SA and Huawei Chief Engineer Officer of the Data Communication Marketing & Technical Sales Department, King Tsui. To hear more on topics such as digital banking solutions, low-cost operating models, supply-chain integration, data mining as well as the challenges and opportunities facing banks now and in the future, register for the next event now!

If you’re a decision maker or major role player in the finance sector within South Africa, the future of finance series are great opportunities you won’t want to miss.

The device designed for the trailblazers has arrived

The Ugu district municipality has, for years, failed to provide a constant source of clean water and parties are pitching their elections campaigns around the crisis