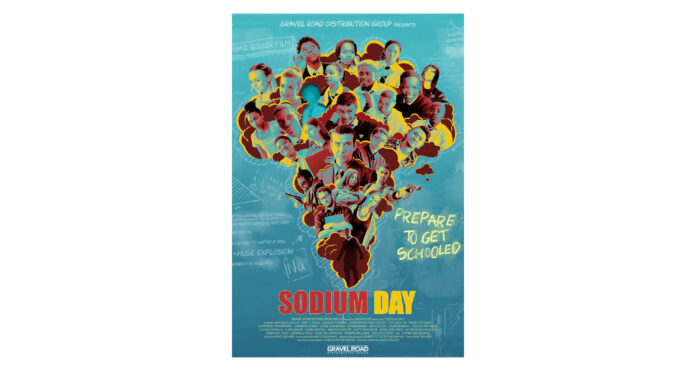 In a Cape Flats classroom, a diligent matric student yearns for a maths teacher. Her classmates, frustrated with all they have lost out on, antagonise the substitute teacher they’ve been sent — his specialty, after all, is in English and life orientation.

Riaz Solker’s Sodium Day, releasing in selected Nu Metro and Ster-Kinekor cinemas on 22 April, is about a day in the life of grade 12Y students at John Shelby High School, and provides a hard look into life at South Africa’s public schools.

The film begins with a bang — literally. In the morning before school starts, three students are experimenting with titular sodium, hoping for a dramatic reaction. They are tired of the way things are at their school, and have little anticipation of anything changing.

As the day continues, so do the misdemeanours; we are introduced to the student who has dropped out of classes to become the designated school security guard for R2 800 a month, a student who carries a knife, and stories beyond the classroom involving schoolgirls and local gangsters.

An exchange with a group of private school students who visit for a day is a stark demonstration of inequality and a microcosm of the broader South African picture. The difference in socioeconomic backgrounds is meant to make the pupils work together, find common ground and learn from one another, but instead it exposes patronising attitudes and blindness to the life the John Shelby learners face.

Boldly confronting stereotypes by both critiquing and playing on them, as a coming-of-age film, it not only exposes the harsh life on the Cape Flats, but also considers the journey of the students into adulthood. They cannot be themselves as they will not be accepted in their community, so they shapeshift and code-switch as is necessary in order to ensure their survival.

Sodium Day grapples with racism, gender-based violence, gang violence, and even autism, and through the school’s burnt-out and ill-treated teachers, shows how these issues progress into the community.

In true South African style, the very heavy moments are balanced by off-beat idiosyncratic humour. While some scenes are difficult to watch, and some language is difficult to understand, the film engages a range of human emotions, and the young cast of film students bring the complex and endearing characters vividly to life.

While much attention has been paid to the consequences of the pandemic on school-going children, Sodium Day shines a light on pervasive issues that have always been there and continue to fester in the system. Statistics South Africa every quarter leads with the fact that the country’s unemployment rate sits at a record high, with the latest statistics revealing that 66.5% of youth aged 15-24 are unemployed.

For Solker, who has been a teacher since 1996, the film is an acknowledgement of real South African students and schools. Constrained by bureaucracy and negative stereotypes, black and brown students are often stuck in a circle of despondency, and their roles are often limited to punchlines, bad guys and supporting characters.

To see local stories told through local film is a means of self-reckoning for South Africans, offering a real chance to consider where we are, and how we got here. “We are not seeing nuance, and I hope this will start a dialogue about what really goes on in schools,” Solker said at a private screening of the film. Like the play King Lear, the story ends in tragedy. With the hopes of South Africa’s future pinned onto the youth, Sodium Day is a sobering look at how in many cases, young people’s wings have been clipped before they have been given even a fighting chance at flying.

The court deviated impermissibly from the constitution to sanctify the composition of the Judicial Service Commission when it found that he should face impeachment for gross misconduct, the Western Cape judge president argued in an application for leave to appeal

The American has grand ambitions for the west London club as he targets sustained success on the pitch and financial growth off it.

The Mdzananda Animal Clinic in Khayelitsha wants to increase the number of pets getting sterilised to curb overpopulation.

Never was the saying ‘Who will guard the guardians?’ more appropriate than at the present