China vs the US: The battle for digital supremacy in Africa 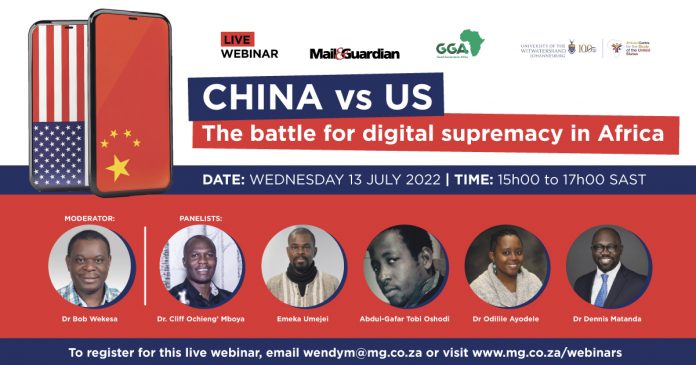 With the global rise of the digital economy, Africa has become a playground for the US and China, respectively the first and second largest economies in the world by GDP.  Recently, the global competition between the two powers has been playing out on the African continent. It has taken the form of heightened competition, the rolling out of policy, and investment strategies by the two superpowers.

From 2018 onwards, the trade war between the US and China instigated by former US president Donald Trump was especially prominent in the Information and Communication Technology (ICT) sector, and African nations were caught in the middle of this conflict. However, little of this dilemma has been analysed from an African point of view. The objective of this webinar — sponsored by Good Governance Africa (GGA) and the African Centre for the Study of the United States (ACSUS), based at the University of the Witwatersrand, and hosted by the Mail & Guardian — was to debate and contribute information on how Africans view the competing approaches of these global powers, thereby providing pathways for Africa’s own strategies.

The webinar was moderated by Dr Bob Wekesa, Deputy Director at ACSUS and senior lecturer in international communications at Wits University.

The speakers all agreed that it is vitally important for African countries to unite and speak with one voice in order to negotiate a way forward through this dilemma. “It is essential for Africa to speak with one voice, as a unit; through the African Union, the Developmental Bank, AfCFTA, and the regional blocks, which all bring Africa together,” said Dr Dennis Matanda, an expert on socio-economic relations between Africa and developed nations.

Africa also needs to adopt a clear-cut continental policy/instrument/framework for engaging with external actors; all the African countries have different engagements at the moment, and nobody is thinking of the long-term effects of embracing Chinese or US ICT, said Emeka Umejei, a journalist with a PhD in journalism and media studies from the University of the Witwatersrand.

Chris Maroleng, Executive Director of GGA SADC, said that ICT has revolutionised the way Africa works, and China has taken advantage of the US’s apparent lack of interest in investing in Africa, but there are concerns that China’s poor human rights record may impact on Africa.

Umejei said African countries have in the short term been adopting Chinese technology because it is cheap and accessible. This could result in many issues in the future, especially if there is a total decoupling from US technology.

In the Kenyan context, Huawei is the key driver of the 5G revolution in the country, and as the country has heavily invested in this technology, it will take a lot of persuasion for Kenya to not use it. China is playing a critical role in developing Kenya’s economy, and right now, it actually boils down to who can provide what the country needs, according to Mboya.

Dr Odidile Ayodele, Senior Researcher for African Thought and Conversation at the University of Johannesburg, said the techno-national war between the US and China is hurting African states, as they are being forced to choose between one or the other. The major points of contention are standards — the sluggish domestic regulatory environment — and infrastructure. “Africa’s shortage of infrastructure means it is a prime target for ICT companies, but it is expensive to install this technology, and to train people to use it,” said Ayodele.

Dr Cliff Mboya, a Research Associate at Wits African Centre for the Study of the United States, said the US is still top dog in the world, but it is a declining power. Huawei has emerged as the leader in 5G technology in Africa, which has US policymakers concerned, and this is a central part of the trade war between the US and China. This has implications for African countries, as the US is trying to dissuade them from using Huawei technology, as the company and its technology is supposedly linked to the Chinese Communist Party and the Chinese military. African policymakers, however, are not buying into this security concern claim.

African universities respond to external investors in the same way that their governments do: who is available, and willing? There are partnerships with big ICT companies; for example, there is a $6-million ICT lab at the University of Lagos built by Huawei; but there is also a Cisco ICT centre, and there is “seamless navigation” between both. There is huge benefit from these collaborations; but, warned Oshodi, the danger is that relying on foreign investors repeats Africa’s historical reliance on them.

Matanda reiterated that China has done a lot in Africa, both in developing infrastructure and in the digital space. It has been investing in developing countries since 1955, and it will surpass the US economically in 2030. But it is still surrounded by US military bases; and while it works more on its own, America’s hegemony is built on alliances.

China is however building up hegemony on the digital front, especially in Africa. Chinese products are cheaper, and it responds faster to Africa’s development needs. “Apart from having the world’s largest programmes for training African professionals, China’s venture capitalists have become synonymous with Nigeria’s technological boom,” said Matanda.

There are more actors in the 21st century in the techno-nationalist war than there were in the last century — such as large corporations — but states are still important. There is less cooperation, which has negative implications for developing countries, which require technological infrastructure and the knowledge to use it. There is also contestation about whether there should be a free flow of information, or whether it should be controlled. The US has a very liberal, capitalistic approach, which gives more power to corporations, whereas China has a far more centralised, state-controlled approach; and the European Union has its own standards, which also affect Africans. Which approach should African states adopt? “I think it is important to adopt a multilateral approach to emerging technologies that includes the voices of the most marginalised in the Global South,” said Ayodele.

China exchanges software and hardware for supplies of raw materials such as copper and cobalt. The US, on the other hand, is willing to send in troops and resources to uphold democratic governance in Africa, and it supported Africa far more than China during the Covid-19 pandemic, but Africa plays a tiny role in the US’s foreign policy concerns. “Compare the $4-billion given to Africa annually from the US to the $40-billion it recently gave to Ukraine; and between 2000 and 2020, less than 1% of US foreign investment went to Africa.” But, for all that, Africans share far more of a cultural heritage with the West than with China — how many Africans speak Mandarin, and what are the most popular social media platforms, asked Matanda.

Questions from the audience

How do we reduce our dependence on countries like the US and China, asked an audience member. Oshodi said that Africa has the manpower, so why does it not have its own brands? He said that the big issue in Africa has been our quality of leadership; for instance, even South Africa, which is far more advanced than its neighbours, is having problems with keeping the lights on. Mboya said China was able to develop exponentially, so if one country can do it, others can too. Ayodele said African countries must focus on getting their basics right: electricity, regulation, education and a proper vision.

Oshodi said that university staff must go into communities and ask what their problems are; development should not be purely top-down: “Covid has taught us to communicate across borders. We must focus on producing knowledge that is useful for Africa.” Matanda said Africa can leverage its own resources by building capacity, and by reminding Africans that they have everything they need.

Another question from the audience was, does it make sense to speak of Africa as a single entity with regards to the US versus China digital battle? Mboya said that many people see Africa as being deeply divided  — but China has been able to unite on many issues, and so has Europe, so we can too. Wekesa said there are sovereignty issues when it comes to African countries speaking with one voice. Oshodi said African countries do have different relations with China, and with the US; there is no monolithic “African” identity, and China knows this, and it uses FOCAC (Forum on China-Africa Cooperation) for its own ends.

Matanda said it does make sense to speak of Africa as a single unit; AfCFTA is the biggest free trade unit in the world. Among the existential threats that Africa faces are climate change, and not being ready for 4IR. Unity is key on all these issues.

Dr Wekesa said more research is needed to understand all the complexities of the new digital era, and who is driving it. He said it is important to note that China is building data centres on the African continent, because data is the “new oil” of the future.

Young & Presidential: Youth as a catalyst for change