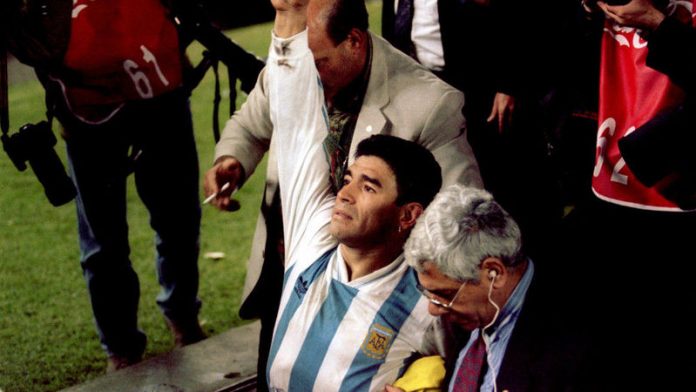 Culiacán, early 2019. Diego Maradona is overseeing a public training session of the Dorados de Sinaloa football team, days before the final of the knockout round of the Mexican second division. Promotion and glory beckon.

Maradona strolls over to the stands, where a bunch of kids in Dorados shirts lean over the hoardings, asking for autographs. “Diego!” they yell. “Diego!” “Sign my cap!” Maradona gets irritated. “If you keep shouting ‘Diego’, I’ll get the fuck out of here. Okay? Okay? I’m here respecting you, you respect me. Okay? If I hear ‘Diego!’ again, I’m gone! It’s not a problem for me.”

The kids simmer down, shushing each other, and Diego signs some autographs, grumpily. There is an awkward silence. His famous charisma flicks off like a torch.

A superstitious person might think it’s bad luck to crap on some adoring kids on the eve of a final. Maradona doesn’t care. As he says, it’s not a problem for him. He has other problems.

Diego Armando Maradona, in short, is a human being. Like each of us, he is a complicated Venn diagram, a three-dimensional scribble of overlapping circles of truth and contradiction.

But for too long now has Maradona’s intricate humanity been cartoonified, reducing his Venn diagram to just three circles:

These images, unforgettable as they are, are merely fragments of his life. A pitifully thin summary. But two new documentary films about Maradona, both released in the past six months, grant rich and overdue nuance to the man considered by many to be the greatest footballer to have walked this Earth.

The God of Naples

Asif Kapadia’s Diego Maradona is a fairly chilling history of his Napoli glory years between 1984 and 1991. Kapadia constructed his narrative from a haul of archival material, mainly family and club videos, Italian television clips and match-day footage.

This mosaic of indirect angles generates a strange sense of distance. We are surrounding the young Maradona without really encountering him. Kapadia made his name with post-mortem portraits of racing car driver Ayrton Senna and musician Amy Winehouse; he is a forensic reconstructor of the pathos of dead heroes. The difference with Maradona is that he’s palpably not dead. Kapadia did interview him several times about his Napoli days, but with a limited yield of honest reflection.

“Part of the dance with Maradona is that he needs people to talk to him. But when you do, he’s going to act like he’s not bothered about the fact that you want to talk to him,” says Kapadia.

The film pays only glancing attention to football, focusing instead on how the city of Naples changed Diego, and how Diego changed the city in turn. It’s a painful story. He arrives in Europe’s poorest metropolis as a sweet, moody ghetto superstar from a loving family. By the end of the narrative, he is a broken god, once the champion of the world and twice the champion of Italy, enslaved to cocaine and painkiller injections. His cruciate ligaments are as ragged as his nerves.

“In one hit, I felt like a superman,” he says of his first brush with cocaine. The shadow of that remark was that even as the greatest footballer in the world, he usually felt inadequate.

By the time he leaves Napoli, he has won the World Cup. He has fathered a love child while married to his Argentinian first love, then flatly and stupidly denied paternity. He has become a drug buddy of the Neapolitan Camorra mafia, whose insidious influence Kapadia chillingly renders.

His Argentina side has beaten Italy in the quarterfinals of the 1990 Fifa World Cup – on the sacred territory of Napoli’s San Paulo Stadium – inviting hysterical vitriol from the Italian media. He has become despised and reviled by the country that adored and nurtured his greatness, and is banned for a year for drug use. He’s a maestro and a mess.

In Maradona in Mexico, Maradona once again transforms a city, between 2018 and 2019. He changes himself a bit too, largely for the better. This time, thankfully, both the stage and the stakes are smaller. Culiacán, with a population of one million, is a rough but unglamorous provincial city. If it is famous for anything at all, it is for being the hometown of Joaquín “El Chapo” Guzmán, the notorious Sinaloa cartel boss and escapologist who is living out the rest of his mortal days in a supermax prison in Colorado in the United States.

“It’s like taking a diabetic to a candy shop,” jokes a Culiacán radio pundit on hearing the news that Diego will decamp to his drug-addled city. Turns out Maradona hasn’t come for the blow though, he can organise that wherever he is, if he wants it. Besides, he seems to be clean right now and his motives are honourable.

“I am a romantic. I am the last romantic left,” declares Maradona towards the end of the series. The first part is true.

Director Angus Macqueen triumphed just to win sustained access to Maradona’s daily routines at Dorados. His camera observes the team talks, the dressing room banter, the exultant victory celebrations. What emerges powerfully is the palpable love he elicits from his players, and you can see the fuel for that love; he speaks to them with genuine rhetorical power – a flair for simple, dramatic language – and he lives the romance of football right now as well as representing it with his past.

He frequently breaks into song, crooning a cheesy Argentinian ballad, waving his stubby arms like a conductor, his eyes welling with nostalgia. And with every victory, he leads an ecstatic victory dance in the dressing room, usually to a song that begins “Maradona, you crazy fucker!”

This warm current of emotionalism, pumped straight from the streets of Villa Fiorito, his ramshackle hometown, is the antithesis of the cerebral, corporatised, data-crunching personality type that now dominates the ranks of elite football coaching.

While Maradona’s tactical acumen remains largely inaccessible off-camera, one scene suggests that he doesn’t tend to overcomplicate things. During the preparations before a big clash, he points to a whiteboard featuring a very rudimentary formation diagram. “Please don’t be afraid to pass the ball. From here to here, from here to here! PASS THE BALL!”

I won’t spoil the football story of Maradona’s Mexican adventure for those who don’t yet know the broad strokes. Let’s say that Maradona sparks two amazing winning streaks for a modestly talented Dorados side. And when things do go awry, the desolation of his players is soap-operatic. They crumple and weep, as though mourning their mothers. You want to grip them by the shoulders and say: “Hey. You lost, but it’s just the Mexican second division, dude. Life goes on!”

At first thought, it was as though the players had somehow borrowed Maradona’s wild emotional pendulum. But maybe these peaks and troughs are much more representative of ordinary footballers’ work lives than we realise.

We tend to think of players in the lower divisions of the professional game as happy plodders, who are kind of lucky – and feel kind of lucky – just to play the game for a living. On the evidence of Maradona in Mexico, it’s all quite a bit more painful than that. Many of his charges are working-class kids, some from the most lethal trafficking regions of the state of Sinaloa. Macqueen shrewdly devotes an extended scene to one of these players, in which he grimly views a cellphone video of a drive-by shooting that has taken place on his family’s street.

Such players are entranced and tormented by the proximity of honest glory and honest wealth. Many are talented enough to rescue their families from economic struggle for good, if they could only reach the top flight or land a big move.

And for these nacos (hood rats) turned humble pros, Maradona’s class identity deepens his moral authority over them. In his greatness, he represents their transcendence – or potential transcendence. And he uses that bond sensitively and cleverly, weaving a web of real solidarity in his side. As he puts it towards the end of his stint with Dorados, “The guys are good people. There is no jealousy. Because I educated them. Because I’ve been in locker rooms for more than 40 years. And that gives me joy.”

This is not to suggest that Maradona cannot behave like an asshole, which he often does, particularly when things go badly. During one big clash, he reacts with seemingly homophobic rage when opposition fans chant “Maradona sucks dick”.

As a rule he is a bad loser, indulging in petulant spasms of paranoia. The cause of a defeat is always that the authorities have it in for him, and not the fact that all football teams lose. And he keeps getting sent off the field during matches, on one occasion falling stupidly for the calculating goading of an opposition coach.

But that old duality in Maradona – the idiot and the God – is almost as compelling as his football was. As Dorados president José Antonio Núñez says ruefully, “Football doesn’t come with an instruction manual. Neither does Diego.”

Like all of us, Maradona has spent decades warring with himself, trying to draft his own instruction manual, trying to fix himself. And his wild adventure in Mexico suggested he might just be getting there. “For me,” he says at the end, “it was like touching the sky with my hands.”