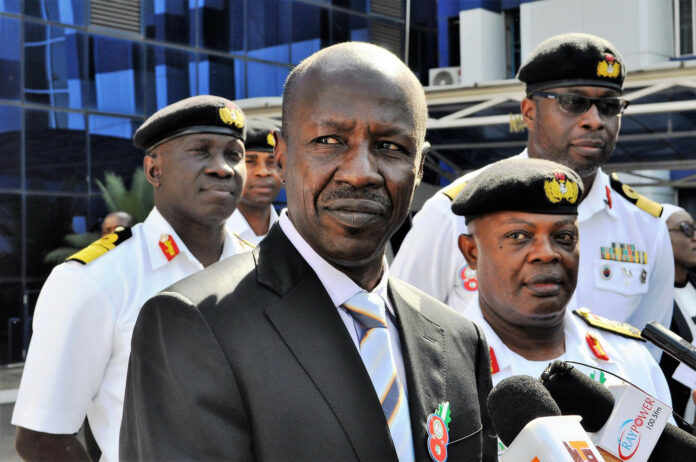 Ibrahim Magu’s job requires him to not be corrupt. As acting chairman of Nigeria’s Economic and Financial Crimes Commission (EFCC), the government body whose sole function is to investigate and prosecute financial crimes, it would be ironic if he were alleged to be involved in financial crimes. It would be like finding out your town’s chief firefighter moonlights as an arsonist.

But Nigeria is a country where contradictory events can be true at the same time. So it was with great surprise — and no surprise at all — that Magu was arrested on Monday by Nigeria’s secret police, the department of security services, and policemen right in front of the commission’s Abuja headquarters as he was heading to a meeting. He was hauled before a “presidential panel” at the Aso Rock Presidential Villa, the home and office of President Muhammadu Buhari.

Magu’s troubles began in June when the attorney general and Minister of Justice Abubakar Malami sent a memo to Buhari accusing Magu of, among other things, re-looting recovered funds and “insubordination and misconduct.” The memo’s existence was first reported by This Day newspaper. A source told the newspaper there were “22 weighty allegations” in Malami’s memo and that he had urged the president to remove Magu, reportedly naming three potential replacements for the top job.

But it’s easy to see why many did not think this memo would amount to much. Memos are a familiar weapon in the internecine world of Nigerian politics. They’re never made public but are always conveniently leaked to the press. Another recent high profile memo that found its way into the headlines involved the national security adviser, Babagana Monguno, allegedly warning security chiefs to “stop taking orders” from Abba Kyari, Buhari’s chief of staff who later died of Covid-19 complications in April.

As things stand (at the time of writing), Magu is still in custody, his two residences in the capital already searched by security agents. He has been relieved of his duties as the head of the anti-graft agency.

But Buhari cannot act surprised that his man has been brought down. Magu’s official title was “acting chairman” of the EFCC since he took over in November 2015 for a reason: the Senate had twice refused to confirm his appointment. Although there were political machinations behind the rejections, there were also allegations by the security services department of corruption and being too cozy with Umar Mohammed, a retired air commodore who authorities described as a “questionable businessman”.

The security services department said Magu lived in a house paid for by Mohammed and flew in private jets with him while on official business, including a trip with a bank executive accused of misappropriating funds.

The question now is why Buhari decided to take action after five years of sticking by his man.

As Gauteng braces itself for its Covid-19 peak, the provincial government says it is knuckling down to deal with ‘shameful’ corruption allegations
Read more
Africa

The reason may be that the messages reinforce popular perceptions that corruption is pervasive and insurmountable. In doing so, they encourage apathy and acceptance rather than inspire activism
Read more
Opinion