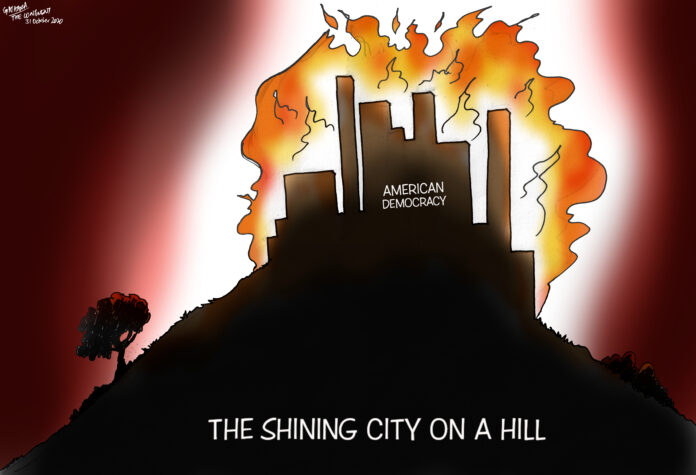 “It is stunning for me, as an African, reporting on it, that the same things that America has been lecturing Africa on appear to be happening right here,” remarked Larry Madowo, a Kenyan journalist working for the BBC bureau in Washington DC, in a recent documentary.

I had a similarly surreal experience. Ten days prior to the US election, I spoke to The Resistance Bureau podcast to discuss the mounting threats to US democracy, and lessons it can learn from African countries on conducting peaceful, free and fair polls. After all, we in Africa are used to being on the other side of the desk – taking lectures on rights and governance from the so-called “developed world” rather than offering them.

It is not just the election that Africans have found disconcertingly familiar. For the last six decades, the West has used “Africa” as shorthand for shitholery – that is, kleptocracy, incompetence, incomprehensible tribal conflicts, poverty, suffering, disease, crumbling infrastructure and a chronic inability to conduct credible elections.

Yet months before Donald Trump’s 2016 election as president, South African comedian Trevor Noah famously observed that Trump could be “America’s first African president”. The conduct of the US government over the last four years, particularly its callous disregard for the welfare of its citizens best exemplified by its handling of the Covid-19 pandemic, has largely borne him out.

Of course, the Africa of the Western imagination has always been little more than caricature, an exaggeration of what fails and a downplaying of what works.

In fact, many African countries have become increasingly proficient at elections and peaceful handovers of power. They have made important investments in systems and technology to improve voter registration, combat fraud and secure the vote.

Courts are also asserting their independence and are increasingly being seen as viable arbiters of contested elections — two presidential elections on the continent, in Malawi and Kenya, have been annulled in the last three years. It is not perfect, nor has the progress been uniform, but it is not a complete dog’s breakfast, either.

Ironically, much of this has been achieved with the help of the US. It’s ironic because, as South African academic Dr Sithembile Mbete, who lectures in political science at the University of Pretoria, noted in the same discussion, the US itself lacks similar and “uniform standards and regulations for managing elections” to protect its own vote. And even by African standards, US elections are routinely stolen through voter suppression schemes and the gerrymandering of constituencies. “The vote-rigging … plays out in the US every election,” Dr Mbete said.

Used to seeing itself as the “shining city on a hill”, a model for the rest of humanity, the US has become a victim of its own hubris. In the eyes of much of the world, its penchant for drinking wine while it preached water has come back to bite it.

As it helped Africans tame rogue presidents and executives, it was growing its own unaccountable overlord at home. As it insisted on the conduct of open and transparent elections abroad, at home its own elections were becoming increasingly opaque.

Even as it stood up for the rights of oppressed minorities on other continents, it had no qualms about oppressing its own minorities. As it claimed to export democracy on the back of wars and economic sanctions, its own wells were allowed to run dry.

Of course, this, too, is exaggeration. Everybody loves to see a puffed-up bully cut down to size and the humbling of the country that loves to routinely declare itself the greatest in the world will inevitably invite caricature.

Like all good caricature, it is based on an element of truth. The US is not about to have an “African” election — as we have seen, many African countries do elections much better than the supposed leader of the free world. It may perhaps be more accurate to say that it is about to do an election in blackface (racist pun fully intended).

Patrick Gathara is a strategic communications consultant, writer and award-winning political cartoonist. This article was produced in partnership with Democracy in Africa, and appeared in The Continent, the award-winning pan-African newspaper designed to be read and shared on WhatsApp. Get your free copy here.Listen to The Resistance Bureau at www.theresistancebureau.com