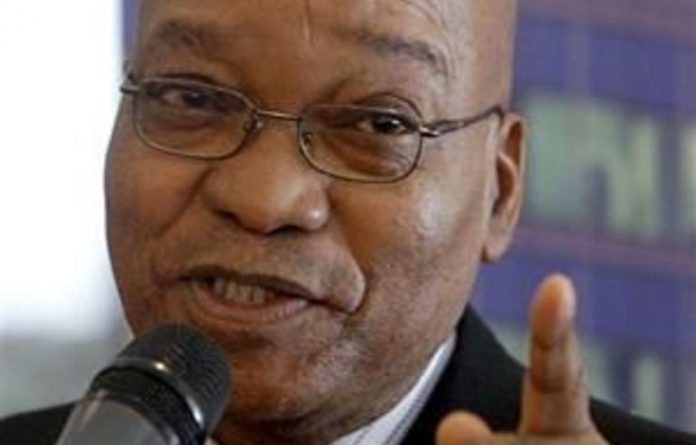 The arrest of a student for “swearing” at President Jacob Zuma’s convoy is a tactic of a police state, not a democracy, the Democratic Alliance (DA) said on Wednesday.

DA leader Helen Zille said the way the police acted was a reminder of the actions of the apartheid-era security police.

“They are reminiscent of Robert Mugabe’s Zimbabwe, which the African National Congress is increasingly trying to emulate,” said Zille.

Chumani Maxwele was arrested on Wednesday last week when he allegedly showed his middle finger to Zuma’s convoy while he was jogging in De Waal Street in Cape Town. He was arrested at gunpoint by police officers.

He allegedly had a bag pulled over his head and was first taken to Zuma’s residence, before he was taken to Rondebosch and then the Mowbray police station, where he was allegedly interrogated by intelligence officers.

He was kept for just less than 24 hours and was released before appearing in court on charges of crimen injuria and resisting arrest.

Zweli Mnisi, spokesperson for the Police Ministry, said Maxwele became aggressive when he was questioned by police.

“Aggression towards the police is unacceptable and will not be tolerated,” said Mnisi.

‘Tactics of a police state’
Zille said she would visit the Mowbray police station on Wednesday to investigate the circumstances of the arrest and detention of Maxwele.

“I am scheduled to meet the Minister of Police, Mr Nathi Mthethwa, at noon today [Wednesday]. I will raise the matters arising out of my oversight visit directly with him,” she said.

“Mr Maxwele was allegedly arrested at gunpoint, had a bag pulled over his head, and was then subjected to a torrent of insults and intimidation from police and intelligence officials over a period of 24 hours, while National Intelligence Agency officers raided his house.

“These are the tactics of a police state, not a democracy.”

Zille said this was the latest in a series of “shameful incidents” by the VIP unit, with no action taken against officers who allegedly overstepped the mark.

“The DA won’t allow this to happen again, we will ensure that those responsible are held to account,” she said. “Under the ANC, there is one law for Jacob Zuma and his cronies, and another for the rest of the country.”

Zille said the DA would call the police minister and the officials responsible for the VIP protection unit to report to the portfolio committee for police.

She said after consultation with Maxwele she would register a case at the Independent Complaints Directorate, among other things. — Sapa