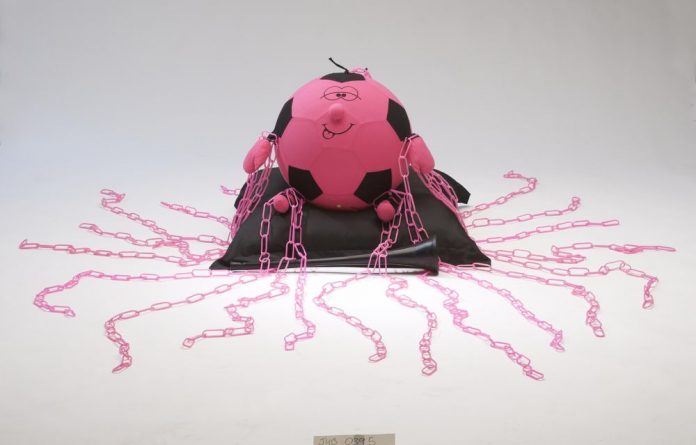 Late last year choreographer and curator Jay Pather was standing on an artwork resembling a metal mat, placed in a corner of Cape Town’s city hall.

The nickel-plated floor piece, titled States of Emergency, was an artwork by Stuart Bird and it amalgamated the old and new South African flags, presenting a provocative critique of South Africa’s post-apartheid democracy. It seemed to trouble Pather as he and his colleagues made their selection for the important Spier Contemporary 2010 exhibition.

“I have concerns about the glibness in the conflation of the two states — the apartheid state and a democratic South Africa,” Pather said.

Bird, the creator of the controversial work, is also known for previous provocations, such as his Zuma Biscuits.

Pather and his co-curators had to interrogate works by artists hoping for a place in Spier’s coming exhibition. The committee included Farzanah Badsha of the Africa Centre, designer and artist Clive van den Berg and theatre practitioner Mwenya Kabwe. For part of the selection process, the fifth member of the team, Ethiopian anthropologist and curator Meskerem Assegued, was somewhere in Africa: in no-visa limbo.

It was a rigorous exercise — discursive, and played over and over, the team criss-crossed the country reviewing more than 2 700 entries for the competition. These ran the gamut of disciplines: performance, video and the traditional visual arts.

‘We are allowed to have a poetic, private moment with the world’
The Mail & Guardian followed the selection process around the country, and by the end of it the judges seemed wary — and weary — of the reactionary logorrhoea presented as art. They were compelled to consider increasingly the race, gender and class of the artist as they considered the work’s intention and its place in the creative landscape.

But it was not all sociopolitical relevance. “We are allowed to have a poetic, private moment with the world,” Van den Berg said, at some stage, dreamily.

The Spier Contemporary 2010 is a loose successor to the Brett Kebble awards, which were cancelled in 2006 after the infamous mining magnate was assassinated. It bills itself as “the largest biennale in South Africa” and works as a competition segueing into a curated exhibition.

The intention of the competition, according to Badsha, “is to transcend the material position of artists to reflect the diversity of production. We want to curate a cutting-edge platform for what artists are saying about South Africa.”

So what are artists saying about South Africa in 2010? Judging by the works, including those that didn’t make the final cut, challenging and interrogative questions are being asked about how far we are from being a nonracial society, the shortcomings of government and the nature of our individual selves.

On a more tragic note, works about violence show that “we need distance to crystallise our response to crime — both as artists and individuals”, Kabwe said.

“Violence is something that we would really like to highlight [in the exhibition], but the artists’ responses generally have been so banal,” Van den Berg said with a sigh.

Engaging with society
There was a swathe of arty narcissism and a paucity of engagement with the social milieu.

Despite the horror of the xenophobic attacks in 2008, few artists grappled with the subject matter: “It’s as if there is an active dodging of the issue [by artists]. It seems to have just disappeared into a distant memory,” said Kabwe.

Yet one of the few who did, Nadine Hutton, did so with grotesque incisiveness. Her nine-minute video, entitled Alien Invasion (or) Burning People is as South African as Braai-vleis — An In(tro)duction Video for Alien Visitors to South Africa, was a chilling mash-up of a George A Romero zombie film combined with clips of Nelson Mandela espousing the country’s attractions, actual footage of xenophobic mobs on the rampage, a white male tanning on a bed and scenes from a suburban braai.

It asked as many questions about why mobs began to incinerate people as it did about how quickly the public began to ignore or forget what was done.

There was a conceptual vacuum in places such as East London, where no works were chosen, and Van den Berg bemoaned the inability of artists “to engage with the reality of South Africa”s poorest province, where deprivation and the breakdown of government services is at its starkest”.

Yet in a reversal of Leo Tolstoy’s notion of art “infecting” the viewer, there were clear signs that some artists are increasingly infected by the political trends in South Africa.

One unfortunate individual in Durban had entered a portrait of KwaZulu-Natal arts and culture MEC Weziwe Thusi because “I hope she can see it and she will love it and I would love to get some help from the bipatment [sic] that will help me for my gift of art.” That a deprived artist should expect that the only way to access art funding is by ingratiating oneself for the purpose of patronage is a sad reflection of a greater societal and political malaise.

Perhaps one of the most contentious pieces to not make the exhibition was An Act of Faith by twentysomething Nkosinathi Ngulube. It was a metal sculpture of an engorged penis on goat horn legs about to enter a shower with water made of safety pins. The work seemed to reference a specific moment in the political life of the country and its leader and also spoke of the alienation that has grown because of people’s experience of HIV and Aids.

The artist’s description read: “I am expressing what I have actually gone through. I had various hair-raising encounters with an HIV-positive girl. I must admit that she gave it good and would seduce me out of a condom. I was lost between passion and my mora [sic] conscience on the Aids pandemic. After every 30 rounds we did I would rush to the sink and wash my nether region. I always prayed to God until I finally broke loose of the girl’s sexual seduction. Looking back I know God protected my blood from infection …”

Bloemfontein proved a city where both introspection and engagement were at a premium within its small community of artists. Afrikaner identity, language and a sense of emasculation in an evolving South Africa were interrogated, as was the Reitz Hostel video scandal, with Janine Allen’s The Island serving as an evocative statement on the acts of degradation perpetrated by four University of the Free State students on black workers.

The piece required the viewer to step on to a plate (almost mimicking the Reitz video’s camera shot of the student peeing into a container, the contents of which were then allegedly fed to workers) and for the room lights to go off and highlight a trail of green phosphorus (developed by UFS physics professor Hendrik Swart) leading from the viewer’s feet to the eyes of a black nanny carrying a white child.

A preoccupation with the World Cup was also palpable in entries and, interestingly, most representations dealt with the tournament as an optimistic antidote to the country’s economic problems. One of the few to treat the event with critical humour was Dawood Petersen’s body of five works.

Badsha noted that although classical artistic influences retained a presence in this year’s entries, there was also an increasing trend by artists to “use South African art as a repository and archive” for their work.

Van den Berg felt that there was “much less rainbow nation triumphalism among artists — especially black artists — but rather an increasing sense of disaffection”.

Travelling from city to city at the end of last year with the curators of the Spier Contemporary 2010 felt, for this reporter, a bit like eating a jet-fuelled madeleine cake.

When visitors to Spier Contemporary 2010 enter the Cape Town City Hall — where Nelson Mandela gave his first public address after his release from prison 20 years ago — they will have an opportunity to wipe their feet on Bird’s States of Emergency. That is perhaps apt.

The Spier Contemporary 2010 curators whittled down 2 700 entries to 100 artists and 130 pieces of work, including performance and the visual arts. The exhibition opens in Cape Town on March 14 at the City Hall in Darling Street before travelling to Museum Africa in Johannesburg and the Durban Art Gallery later this year