Spooks to sniff out who’s behind protests 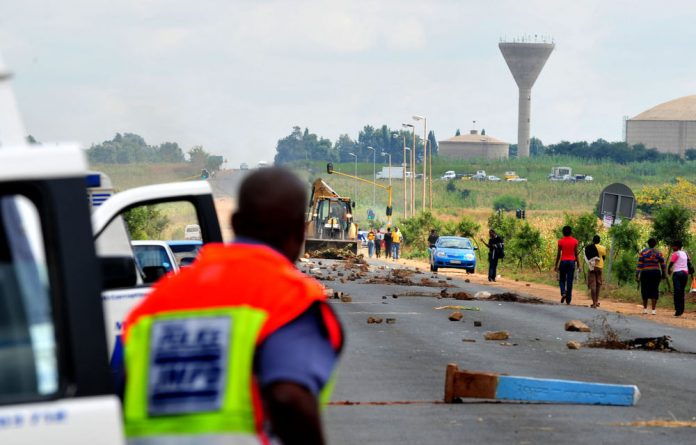 ANC claims that service delivery protests are being coordinated came under fire this week and, as Gauteng erupted in further protests after last week’s surge, the National Intelligence Agency (NIA) has revealed that it is monitoring the protests.

Residents of Ivory Park, Rabie Ridge, Kanana, Phomolong, Poortjie and Ennerdale took to the streets this week. On Wednesday police arrested 30 people and charged them with attempted murder and malicious damage to property in Poortjie, near Orange Farm.

“It seems there is a systematic pattern and that the protests are coordinated with a clear objective to destabilise government,” Dumisa Ntuli, the ANC Gauteng spokesperson, said at the time.

Asked this week who might be coordinating the protests, Ntuli told the M&G there were “many forces”. “People from Sanco [the South African National Civic Organisation], people from the party itself, intra- and inter-alliance conflict …”

He said that there was “definitely a role played by members of the ANC and ANC supporters; they were the main forces behind the protests. The PAC [Pan Africanist Congress] also plays a role,” Ntuli said.

The SACP’s Gauteng spokesperson, Jacob Mamabolo, directed the Mail & Guardian to its joint statement with the ANC, Cosatu and Sanco on Wednesday this week which said that service delivery is not really behind the protests. Rather, the protests are in communities where “a lot of development is under way” and so are “more about calling for speeding up of service delivery”.

But Cosatu’s spokesperson, Patrick Craven, told the M&G: “We don’t believe there’s any mysterious third force behind the protests … The people have genuine grievances about service delivery which was promised to them.”

Dumisani Mthalane, the Sanco spokesperson, told the M&G the organisation was “not part of the disruption”. “Government and civil society must work together to identify problems. Sanco is there to keep government accountable, so there is no way we would make the country ungovernable.

“We will protest if there is a problem, but we don’t support destruction. Sanco marches are peaceful. We negotiate first and if that fails, we protest,” he said.

Mfanelo Skwatsha, the PAC secretary general, said the party’s involvement had been mainly in Sharpeville. He said, particularly with Sunday’s commemoration of the 1960 Sharpeville uprisings looming, people were unhappy about not getting the respect they felt they deserved.

“It is not just about service delivery but about how the government has been conducting itself, especially with regard to Sharpeville,” he said.

Attributing the protests to factors such as people positioning themselves before the local government elections next year was a “smokescreen by the ruling party”, Skwatsha said.

“Very soon the whole country will be engulfed in service delivery protests. The people have a lot of grievances.”

Brian Dube, the NIA spokesperson, told the M&G: “We are involved as [the] state security agency in terms of our mandate but, due to the operational nature of our work in this regard, we are not at liberty to provide further details.”

In May 2005 then-intelligence minister Ronnie Kasrils said the NIA would investigate the causes of the surge in violent service delivery protests.

Target of the people’s anger

City of Johannesburg spokesperson Virgil James told the M&G that Poortjie residents stoned the cars and house of their local ANC councillor, Advocate Nyambe, in the early hours of Wednesday morning. They then dragged him and members of his family, including two children, from the house and assaulted them.

Nymabe’s house was “practically destroyed”, James said. “The councillor was seriously injured; he’s currently in hospital in a stable condition. The two kids were checked for internal injuries and discharged [later on Wednesday].”

By Thursday morning Nyambe was still under police protection in a hospital James declined to name, citing fear for the councillor’s safety.

Captain Johannes Motsiri at the Orange Farm police station told the M&G that “about 30 people” had been arrested on Wednesday following the attack on Nyambe. They will appear in court on charges of attempted murder and malicious damage to property.