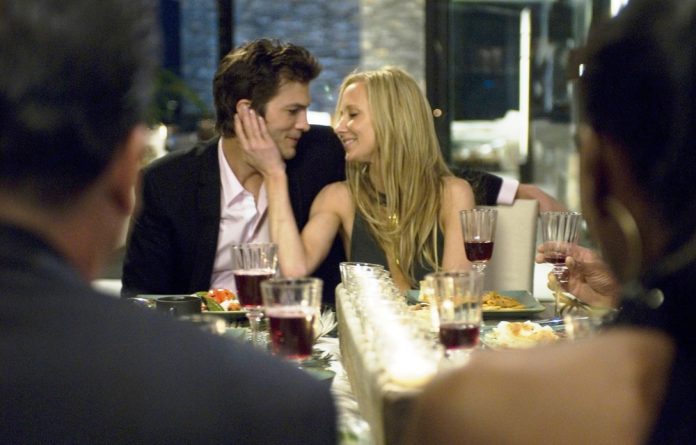 Don’t kid a kidder, or play a player, they say, and yet the kidders and players of this world can really expect no other treatment. Spread, David Mackenzie’s smart, pessimistic movie about a Los Angeles hustler called Nikki, is a cruel demonstration of this.

Ashton Kutcher stars as the pretty young guy who has expert and enthusiastic sex with older women who have perhaps come to feel that the number of men who enjoy having sex, as opposed to just thinking about it, is far smaller than you’d think — like the ratio of men who play sport to men who just enjoy sport on television.

From his opening voiceover, Nikki initially appears to have no illusions about the city or the thousands of young people like him who pour off the buses into Los Angeles every week, hoping to make it big.

Mackenzie’s first shot is of the LA sky: a sunbather’s or poolsider’s view of the sky. It is against this affectless Warhol blue that Nikki dreamily drones on about how great looking he is, how easy it is for him to seduce women and how he can therefore look forward to an easy life. He is the sort of character who in traditional terms is heading for an awful comeuppance, followed by the sentimental learning of life lessons about love and relationships.

But despite a final and worrying romcom-style rush to the airport, Mackenzie’s film sticks to its anti-romantic guns and, incidentally, over the final credits he has a hilarious and brutally symbolic image of a frog that is well worth watching to the very last as the cinema empties out. That frog deserves some sort of award on its own.

Kutcher’s Nikki is a startlingly unpleasant and conceited creation and, for such a narcissist, is entirely without a sense of self. The nearest he comes to insight is an aside about how he once, as a child, glimpsed his mother’s luxuriant pubic hair in the shower, which gave him a permanent preference for something more “trimmed”.

Apart from some vague ramblings about having once hoped to make his living by getting photographed while lounging around, Nikki has a stunning lack of interest in anything like a professional identity. He doesn’t have headshots or wait for callbacks, like other young men in his position. He lives in the present, a smirking predatory figure at parties and clubs, looking for beautiful young women to have sex with and older women to sponge off.

Nikki infuriates his supposed best friend Harry (Sebastian Stan) by crashing at his place when there is nowhere else to go, and his unhappy and exasperated ex-girlfriend, Emily (Rachel Blanchard), whom he coaxes back into bed when there’s no other action. He has become accustomed to enjoying other people’s wealth, but he is one step away from being a hobo.

One night, ranging around clubs, and treating us to some Alfie-ish thoughts about the women present, Nikki latches on to Samantha, a sleek older woman played by Anne Heche. Charmed and amused by his sheer shallow gorgeousness, Samantha allows him back to her fabulous home in the Hollywood Hills, explaining that it once belonged to Peter Bogdanovitch, a name that means nothing to him. He moves in and, inevitably, she becomes mad about the boy. But this is the moment for him to conceive an infatuation for a maddeningly beautiful waitress called Heather (Margarita Levieva), who seems to be in, or on, the same game as him.

There’s a dark and unrecorded Tinseltown history of pretty young men and women finally deciding to charge people for sex, as opposed to simply giving it away free in the hope of some deal. Heather and Nikki have made this decision, or had it made for them, yet they don’t immediately appear sad or embittered in any way, and any emotional hardening is all but invisible in the vast city sprawl.

Their real lives — the uncool, boring family lives they once had before putting on this big LA act — are urgently banished or falsified, although it turns out that Nikki’s relationship with his mother is still difficult: she actually hangs up on him in the middle of a fraught telephone conversation. Yet all these tensions would be present if their lives were going to plan.

It is the very act of transplanting oneself to lonely Los Angeles and hoping to trade off glamorous good looks that is the traumatising event — quite aside from whether it turns out to have been a success. And Mackenzie’s portrait of this seems to me shrewder, more interesting and more compassionate than, say, Bret Easton Ellis’s studies on the same theme.

As for Kutcher, he is a far better and more interesting actor than he gets credit for: just as in his underrated sci-fi thriller, The Butterfly Effect, Kutcher is a credible and potent leading man with an easy address to the camera. He carries off the movie with some style. —