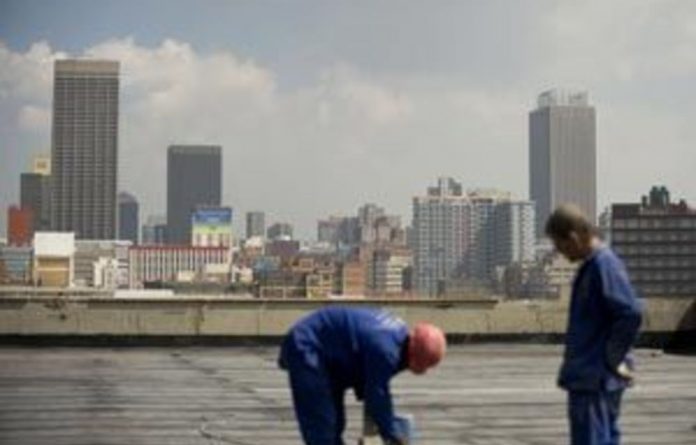 The idea of living in the city is usually easier said than done, especially if the city in question is sometimes referred to as “Johazardousburg” by suburbanites whose avoidance of the Johannesburg CBD is:

That said, let me start by not distancing myself from my suburbanite status. I live in the leafy and trendy suburb of Illovo, Johannesburg (typical descriptions intentional). I live here because it’s perceived as safe, central, upmarket and the noise and prostitutes on Corlett Drive don’t really bother me. Basically, life in Illovo is nice, in that bored-to-tears kind of way. When I do venture out for a good time in my neighbourhood, I usually eat at Trabella or Wolves and once in a while I’ll go for a boogie at Rose Boys.

A few months ago, on one of these dinner and boogie nights, a friend thought it would be swell to attend a film screening at a new place called Arts on Main in the eastern CBD instead.

When I first went to this Halala Award-nominated locale in the Maboneng Precinct, I — like many who have been there — fell in spatial love. Now I go there at least once a week to see a film, eat at Canteen or visit the Seippel and Goodman galleries.

Jonathan Liebmann, the twentysomething property developer behind the development, is transforming a 1970s industrial building into a residential block not far from his golden prototype. I know that the CBD’s days as we know them, are numbered.

Main Street Life is the name of the concept block that’s quietly playing a catalytic role in the exodus of the artful elite into the surrounds of Main, Fox, Commissioner and Kruger streets in downtown Jozi. Facilitated by the very ambitious www.mainstreetlife.tv web TV channel and word of mouth, the 200 units in the building are selling like the cool cakes they are, while the June 2010 completion date draws near.

As the name suggests, Main Street Life isn’t just any old apartment block. It aims to have a greater impact on the lives of its inhabitants. It’s a physical representation of the 2010 consumer mindset in a post-recession climate where the values of knowledge, collaboration, sharing, innovation and green living will form part of the DNA of this nascent community.

The completed building will include a boutique hotel with 12 suites called “The 12 Decades”, honouring Joburg’s 12 decades of existence. Each suite will be custom-designed by designers from different disciplines, including fashion’s Jacques van der Watt and Danica Lepen of Black Coffee and photographer Mikhael Subotsky.

Liebmann and his wife, Lauren Wallett, already live in one of the penthouses (which includes panoramic views of the city). Wallett owns one of Main Street Life’s unique eating spaces, Malva, a confectionary-cum-boulangerie that might even end up having its own cooking show on www.mainstreetlife.tv.

Malva will be at ground level next to a local designer clothing store, as well as the independent cinema, The Bioscope, which will screen art house and commercial films every night of the week.

In addition to the penthouses, there are double and single units and each of the different floors will pay homage to film, fashion, music, design, advertising, architecture and the visual arts, including fine art and photography. This initiative is not motivated only by aesthetics, but also by an effort to build a collaborative community of artists and residents who will have use of the exhibition spaces.

For instance, if a fashion designer were to move in, he or she would have access to a working studio equipped with cutting tables and rails in that floor’s collaboration space. He or she would be able to exhibit a curated mini collection in the exhibition space provided. Residents and non-residents would be able to visit these gallery exhibitions and enjoy the option of having drinks on the open-air rooftop, which will be visible on the city’s skyline thanks to an incredible sculpture by local artist Marcus Neustetter.

The rooftop is a destination on its own with a fully licensed bar, boxing gym, yoga facilities, a look-out point, plunge pool and, of course, unbelievable views of our beloved “Johazardousburg”.

For an annual membership fee, non-residents will have access to the rooftop, which serves as an events, exhibition and collaboration space. The use of all the other facilities in the building, such as music rehearsal rooms, a DVD rental service, laundromat and internet in the building, will also be available to non-residents.

Although the building is not completed yet, one of the single units is already occupied by the young man responsible for me even knowing about this building, 24-year old Russell Grant, whose charm, I believe, goes a long way to selling this idea. He is now the founder of his own project collaboration agency, Red Team Go.

A year ago Grant worked at Saatchi and Saatchi, making award-winning adverts. That’s where he first met Liebmann. Their initial meeting was about introducing film screenings to Arts on Main, which are now a regular occurrence thanks to Grant and Bioscope co-founder Darryl Els.

When he heard about Main Street Life, Grant approached Liebmann with a risky but savvy marketing idea for the building: he would move from Houghton into the unfinished building and live in the show space, capturing his charmed life experience of the precinct on video and post the videos on www.mainstreetlife.tv, hoping that people would respond to his links on Skype, Facebook and Twitter. As it turns out: “This was a match made in project-collaboration heaven,” says Grant, because the right kind of people are getting the memo and “Main Street Life is cooking”.

Liebmann’s efforts to get people to buy into the city are supported by Grant’s unorthodox but very modern marketing approach, which can’t be extremely difficult when artist William Kentridge and photographer Mikhael Subotsky’s offices are literally a stone’s throw away — make that a bike ride away. Main Street Life will have a bike rental service, in which anyone will have the option of parking his or her car and riding in and around the small side streets á la the ever-chic locals of Williamsburg, New York.

When I ask Grant about the security, he tells me that he comfortably walks the streets at whatever time of day because the cricket population supersedes the sparse human population in the area.

I’m sceptical, but I feel the need to give the guy some credit because he’s selling a space he actually lives in. He also assures me (as though I’m a prospective buyer), that there are 24-hour surveillance cameras, 24-hour security guards and a biometric access system to the building.

As property development would have it, there is another residential block being developed next to Main Street Life, so one can imagine the value of this area in a year’s time. It’s no surprise that all the penthouses already have eager homeowners and the rest of the units are following suit. I just wonder how I’m going to justify paying rent in Illovo, when I’ll probably be spending most of my time as an honorary resident at Main Street Life.