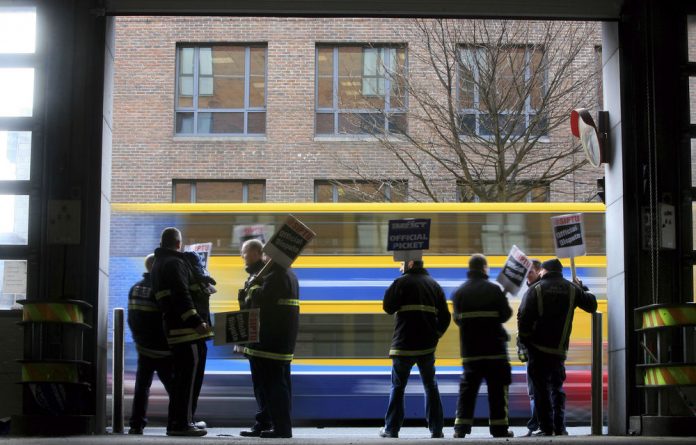 When Ann Moore returned to have breakfast with her family after a 12-hour night shift at a nursing home, she found riot police and bailiffs outside her home of 16 years. She, her husband Christy and their three children were being evicted.

Despite climbing a ladder to the top of the house, where she stayed for six hours in a desperate attempt to thwart the bailiffs, she was eventually coaxed down and her Dublin home was boarded up.

In a country where 300 000 homes lie empty, the authorities decided to make the Moores homeless. Yet many believe Ireland’s politicians, bankers and developers are to blame.

Once the poster child of free-market globalisation, Ireland is, per capita, the EU’s most indebted country — its 14,3% budget deficit is higher than even Greece’s.

Its government has slashed public-sector spending by 7,5% of GDP this year: pay by 15%, child benefits by 10% and unemployment benefits by 4,1%.

Another €3-billion will be removed next year, a total of 10% of GDP over three years.

Despite the cuts, dubbed ‘masochistic” by the Financial Times, Ireland’s debt is still growing, thanks to the bailing out of its banks. Critics fear this death spiral could lead to a decade of grinding austerity, a generation lost to unemployment and the return of a spectre that has haunted Ireland for two centuries: mass emigration.

Said Pat Ingoldsby, a Dublin street poet: ‘Daily, I wander through my city and I hear the crashing of other people’s jobs all around me. My most treasured possession is that I’ve got nothing to lose.”

While ghost estates of new, unsaleable flats stand empty across the land, 170 000 people are struggling with negative equity.

Ireland has the EU’s fourth-highest unemployment rate (13,4%), with 432 500 people on the dole; a third of the working population under 30 is jobless.

And unemployment would be worse were it not for the return of emigration. Nearly 20 000 Irish nationals emigrated between April 2008 and April 2009, and research suggests a further 100 000 will leave this year and next.

With its tourist bikes for hire under newly planted lime trees and its glass-and-steel docklands, Dublin still echoes recent prosperity.

In the 1990s, a stagnant agricultural economy was transformed into a highly skilled post-industrial playground. Computing and pharmaceutical jobs were garnished by a turbo-charged property sector.

Between 1985 and 2006, Poles and others rushed to share the dream of a self-confident nation emancipated from the shackles of Catholicism and colonialism.

Much investment during the global boom came from the United States, given the shared language and Irish roots of many American investors and alluringly low tax rates. European socialism helped too: Ireland pocketed 8.6billion Irish pounds from EU structural funds between 1987 and 1998.

What went wrong? Almost everyone in Ireland points to an unholy trinity of politicians, bankers and developers. The government blew up a demented property bubble by offering huge tax breaks on new buildings. Construction swelled to one-fifth of Ireland’s economy. Prices, mortgages, wages and costs soared.

By the time of the global banking crash, Ireland’s unregulated banks held a terrifying amount of debt — by 2008, the Anglo Irish Bank held €73-billion of loans, half of Ireland’s GDP. The country was Europe’s first to enter recession.

Said economist and author David McWilliams: ‘We’ve got to look at a whole professional class — estate agents, lawyers, auditors, investors, crony politicians — who became intoxicated with greed. They didn’t hear the warning signs because their ears were stuffed with cash.”

According to writer Fintan O’Toole, voters did not tell politicians to stop, and politicians did not set limits for developers or the banks.

Since independence, Ireland has been dominated by two right-wing political parties, Fianna Fail and Fine Gael. Fianna Fail has governed for the past 13 years and everyone is furious with a government they cannot vote out for another two years.

But as Ireland’s ruling classes remark complacently, Ireland is not like Greece, France or Iceland, where popular protests called on the government to resign. There has been no rioting on the streets of Dublin.

Last week, in heavy rain, 1 000 people gathered there for the rather politely titled ‘right to work” march. ‘Anger is a private thing in our country; it’s there, but we don’t express it in public,” said Ben O’Neill, a protester wearing a badge that says ‘Fuck Nama”.

Nama is the bank created by the government to remove toxic loans from the economy. A total of €73-billion of public money has already gone to Ireland’s banks.

A demonstrator dressed as Marie Antoinette throws cakes into the crowd. Phyllis Carroll from Shankill said quietly: ‘The cuts have affected everybody.” She stabs a finger at the Dail (parliament building). ‘They’re the only ones who aren’t feeling the pain.”

The Carrolls are living off their savings, supporting their youngest through university. Phyllis’s husband Ray’s disability allowance does not cover their basic living costs. ‘There’s nothing left in the kitty. The savings we’ve taken years to put together have gone,” said Ray.

In this land of mass unemployment, workers are struggling to protect their jobs. An employee of Quinn Insurance, a boom-time success story taken into administration, has been told his company is looking for 900 redundancies, more than a third of its workforce.

He has tried to encourage his depressed, stoical peers to join the union, but can’t get the numbers. ‘Some are scared, and others think they can’t do anything,” he said.

On the international stage, Ireland is attracting applause from the right: British treasury officials recently discussed how best to effect cuts with their Irish counterparts, and the financial press has praised Ireland’s finance minister, Brian Lenihan.

Lenihan has called Irish bankers’ behaviour ‘truly shocking”, but his government remains loyal to the global free market. ‘We saw what worked 20 years ago. Let’s see if it will work again,” said one government economist.

Economist David McWilliams, a maverick who presciently warned of Ireland’s impending economic conflagration, has two radical, populist solutions: let the banks go bust, and leave the euro. Individuals’ deposits could be guaranteed whereas corporate bondholders would lose out, but the markets would not panic, he believes — rather, they would regard the Irish economy with renewed interest, because money earmarked for bank bailouts could be invested in the recovery.

Saving Anglo Irish Bank ‘is the economics of Stalingrad”, he said. ‘Throwing all your resources at a symbolic entity signals to the rest of the world that you are a fanatic.”

McWilliams said that Ireland’s attachment to the euro and the EU was born of the establishment’s traditional desire to eschew Britain, still Ireland’s biggest trading partner.

If Ireland left the euro and returned to the Irish pound, its currency would take a hammering. Let it, said McWilliams: if it fell by 40%, suddenly Ireland’s wages would be 40% less than its rivals. Investment would flood in; exports would be super-competitive.

More orthodox voices will not countenance either letting Irish banks die or leaving the euro. ‘You can’t let a bank that is half your GDP collapse. It pulls the entire economy down with it,” said a government economist.

But it is fear and the grim lack of political alternatives that weighs on the homeless Ann and Christy Moore.

Said unemployed Christy: ‘You should be strong but you feel so low. And all the time you hear you have to tighten your belts.

‘It’s fear — that’s why people aren’t rising up. But we mustn’t fear the corrupt politicians, bankers and developers, because that’s what they want.” —