Rwanda at pains with democracy 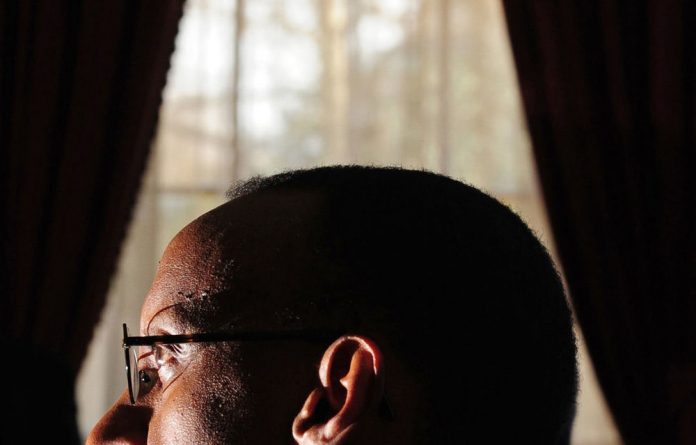 With an election looming, an opposition leader detained and newspapers closed, President Paul Kagame offers a robust defence to accusations of suppressing dissent

Paul Kagame sits at the head of a vast polished oval table in his lush presidential compound in Kigali, an apparently fragile figure, rake thin, his dark suit hanging loose. The wire-framed glasses above jutting cheekbones give him an austere academic look.

Rwanda’s president is a thoughtful man, who listens attentively and speaks slowly with an occasional almost self-deprecatory half-laugh, but the steel in the former general who brought genocide to an end 16 years ago is evident in his words. “Democracy is good music but you need somebody with ears to listen to that music,” he says, leaning across the table. “It doesn’t matter how much you talk about democracy or human rights. Tell me about a family who spend the whole night looking at one another and wondering whether they will have something to eat. Are they thinking about anything else? They are just not listening.”

We can all agree on the substance of democracy, he says, but the form it takes will be ­different even among European countries, the United States and Japan.

“Your model of democracy, why should it be suitable for me?” he asks.

Kagame has enjoyed the admiration of the West for establishing a peaceful, orderly and increasingly prosperous Rwanda since the ­genocide of 1994. The country is now the darling of donor nations, with Kigali a striking contrast to the noisy, litter-strewn capitals of neighbouring African states.

Kagame’s model of development, he unhesitatingly says, is South Korea or Singapore. Plastic bags are banned. Dilapidated houses bear a large red cross, a warning that they must be renovated or face demolition within six months. But, to Kagame’s irritation, outsiders have begun to question the tight control he exercises over this model African state.

In recent months two independent newspapers have been closed and two generals have been arrested. Most controversially, Victoire Ingabire, leader of the Hutu opposition United Democratic Forces party (FDU), has been placed under house arrest following her return from the Netherlands.

Kagame, leader of the Tutsi-dominated Rwandan Patriotic Front (RPF), is being accused of suppressing dissent and subverting the democratic process ahead of the presidential elections in August. But he argues that criticism from outside is unfair and ill-informed.

“Why should the outside world judge Rwanda, judge Kagame, based on the views of two or three people or papers and not based on the views of Rwandans? If you ask people how they feel about government and the leadership, they give an entirely different view from what outsiders think,” he says.

Kagame’s view is that the media high council had to act against the newspapers, which were libellous, irresponsible and inciting ethnic violence, and his government had to move against the generals, one of whom was accused of corruption and the other of immorality. Ingabire, he says, has links with rebel Hutus. The timing of events was coincidental; his government could not delay taking action just because the presidential election was imminent.

“The West has democracy because it has institutions that hold people accountable. What has killed Rwanda and Africa is that people are not held accountable,” he says. “So the question is, how do you want us to live? By allowing ministers or generals or mayors to run the show without accountability? Is that the form of democracy you want for us? We are saying no.”

Years on from the genocide of the minority dominant Tutsis and moderate Hutus, initiated by Hutu militia and politicians, no one believes that the two groups now live in universal harmony, even though ethnic identity is suppressed — identity cards don’t show a person’s group and children write school exams under a number, not a name.

But Kagame’s priority is food on the table. He hopes the next generation will be too busy making money to fight. Change is embraced. Things get done. The agriculture minister, a woman, is driving through potentially unpopular reforms of land use, persuading farmers to concentrate on the crops that grow best in their region, which goes against the tradition of subsistence farming.

Landlocked Rwanda is in discussions with its neighbours about lowering tariff barriers and forming an East African union. There are incentives for businesses to start up. And Kagame is rare among African leaders in his condemnation of dependence on foreign aid, which, he says, risks “depriving people of their dignity and not pushing them to work and uplift themselves, because that is what makes it sustainable”.

He puts a shot across the donors’ bows. “If it were entirely altruistic, why would the West be more interested in giving aid than in opening up for fair trade?”

A few kilometres away, Ingabire sits in state in a partially furnished bungalow. The houses in the 2020 Vision estate, with leafy gardens and wide, paved streets, all look the same but it’s impossible to mistake her house. On the pavement facing the high, locked gate sits an armed guard on a wooden chair. Another is half hidden by a hedge, talking on a cellphone.

Ingabire cannot leave her house. She came back to stand against Kagame in the August election, but cannot get past the first hurdle. To register her party she must hold a rally of at least 200 supporters.

She says she has come to champion democracy because Kagame’s ruling party has failed to do so.

“Sixteen years after the genocide we think it is time to move to the democratic system,” she says. “You can’t say because of the genocide that people can’t be free. I don’t agree with this.”

It is put to her that most people outside Rwanda think the country has made great progress in the past 16 years.

“The problem with Kagame is that he says we have stability and development and we don’t need more,” she says. “My answer is that the stability we have in Rwanda is stability based on pressure. We have development in the hands of a little group.”

Beyond the Kigali region, she says, poverty remains.

Kagame’s foreign minister, the formidable and highly articulate Louise Mushikiwabo, who spent 20 years in the United States and is married to an American, thinks Ingabire’s arrival is a threat to the hard-won truce between Tutsis and Hutus. She characterises Ingabire’s challenge as “very deliberate, controversial ethnic politics”. “This woman really has a genocidal ideology.”

Ingabire threw down the gauntlet on the day of her arrival, says Mushikiwabo. She went straight to the genocide memorial museum in Kigali, looked around and asked why it did not commemorate the deaths of any Hutus who died in the violence.

“That in Rwanda is revisionism,” Mushikiwabo says. “We know that there were Hutus killed in the context of the genocide, but they weren’t targeted. The more you blur the lines, the more you think it was a free-for-all.

“To us it is so clear cut. The dynamics are not understood abroad. It is maybe because things look too normal in this country. But when you allow people to go out into the villages and start that sort of rhetoric, you are really walking into trouble.”

Ingabire rejects the allegations about her supporting and funding rebel Hutus in the Congo. She says she went to Kinshasa twice, but not at the times claimed by the government.

“They say I was in Kinshasa and met members of the FDLR [Democratic Forces for the Liberation of Rwanda] in March and September 2008. I was not there in March but in February, not in September but October. I can prove it with my passport.”

She says she went to ask the Congolese government, as she had done in many other countries, for support for her political party.

Ingabire does not dispute the genocide of 1994, but it is clear she is concerned about what she thinks is the airbrushing of violence against the Hutus.

About a 45-minute drive from Kigali there is a church where the sun shines through bullet holes in the wooden roof on to thousands of pieces of soiled and rotting clothing on the wooden benches below. They and the shelves of skulls and bones in an underground crypt — are all that remains of about 10 000 Tutsis massacred there.

You can still distinguish girls’ dresses and women’s skirts. Machetes and knives lie on the blood-soaked altar cloth. A young woman tells you calmly that the weapons were used to rip the unborn baby out of the womb of a Hutu woman who refused to kill her Tutsi husband.

As you walk away, shaken, the question of democracy takes on a new relevance. Just 16 years on, is Rwanda ready for it? —