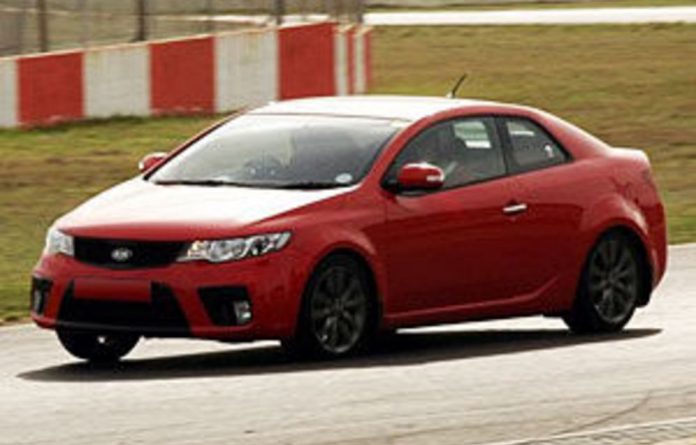 Good looking and good value it most certainly is, but Ray Leathern is itching to find out if the Kia Koup is a sports car.

From the Korean company that purveys such majesty on our roads as the Kia Sedona, Picanto and K2700 flat-bed truck, comes the Kia Cerato Koup, to use its full, double-barrelled title. And first things first — just look it at … Snazzy isn’t it?

Born from the pen of ex-Audi man Peter Schreyer, the Koup melds simple silhouettes with a bristling, boy-racer bravado, especially in the test car’s “racing red” paintwork with anthracite-coloured wheels. Pillar-less windows, (fake) rear diffuser and chunky dual exhaust tip — I just couldn’t wait to have a go and get to the bottom of the big question: Does it possesses any real go to match its surprisingly impressive show?

However, I soon discovered something annoying about the Koup: a sense of false advertising. Not even the slightest pretence has been made to make the Koup drive or feel like a sporty derivative of the Cerato. The power-steering is mind-numbing in its dullness, the clutch connected to the end of the inviting aluminium clutch pedal might be out of a Picanto, and the five-speed manual gearbox offers up shifts that are as sporty as a newly thin Darren Scott. The Koup doesn’t even placate its pilot with the reward of a sporty exhaust note.

At this stage, and I’m not proud to admit this, I wanted to punish the Koup for its sins. I wanted to drive it into the ground; I wanted to show the Korean wannabe what sort of treatment it would have to deal with if it so bravely stuck its neck out. What better place to do that than at an open track day at Killarney? Held once a month, or sometimes more frequently at various other circuits in South Africa, you pay a few hundred rand and you can take any road car or track car out on to the circuit with a full team of paramedics and marshals in attendance.

A quick inspection of the Koup for its track-day potential did not bode well. It’s normally aspirated 2,0-litre motor only makes 114kW and 194Nm, so no M3 hunting on this occasion. It rides on torsion beam rear suspension so it will hardly be a thriller in the corners. It has a good, short, front overhang, but the engine is still mounted mostly in front of the front axle, so the chassis will have its work cut out in handling quick changes in direction.

Creating a stir
The Koup created quite a stir in the pit lane. I assume this is because of its rarity, but a real sense of expectation was building from spectators around what the little Kia might do out on circuit. I braced myself for their imminent disappointment.

I then waded out into battle, making the most of the Koup’s limited power, slushy clutch and spandex-like steering. The first thing I noticed was the car’s bizarre gearing ratios. Most corners at Killarney are taken in third, but both turn one, two and five must be taken in second in the Kia if you want to have any drive out of the corners. Second-gear cornering was surprisingly fun, though. Lots of tyre squeal, enough front-end grip and not as much under-steer as you might imagine. The car hugged the corners nicely and the brakes did a reasonable job too.

When the circuit opened up, the Kia’s lack of power in third and fourth on the straights could not be hidden. It took forever to go through the revs flat-out on the back straight. The result was lap times close to one minute, 37 seconds, which isn’t quick at Killarney. But I was still having fun and I went out every session. The most rewarding thing to come from the day was the Kia’s economy and lack of wear on the car, brakes or tyres. After a full day on the track, I still had a car with petrol in it that I could drive home in.

To conclude, the Koup is far from perfect. More engine is needed to fill that cavernous engine bay as well as six speeds in the gearbox, and less power assistance in the steering would do nicely. But I will admit, despite my most fervent efforts, it won me over on styling, won a measure of my respect on the track, and at R209 995, it most certainly wins over my bank manager.