Way of the hippo 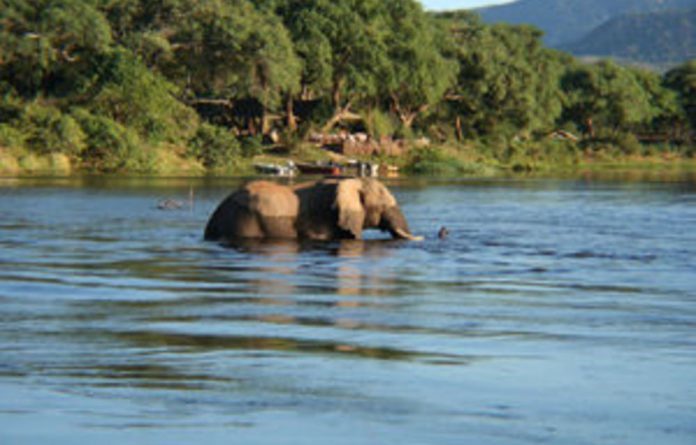 As I brush the sweat from my face and take another gulp of cold beer, I remind myself that it is June, and mid-winter, and that back home in Pretoria I’d be shivering in front of the heater.

But here on Kanyemba Island, in the middle of the mighty Zambezi, it’s in the low 30s and a herd of elephants has just pulled in for a cooling wallow in the reed bed below me.

“Check that out!” The call comes from the irascible Riccardo Garbaccio, owner-manager of Kanyemba. He points to an enormous Pels fishing owl that has come to rest on the lower branches of a winterthorn tree overlooking a still pool at the river’s edge. It doesn’t get much better than this in Zambia’s Lower Zambezi Valley, which, as the crow flies, is the same distance from my hometown as Cape Town, but a hell of a lot wilder.

Kanyemba Island nestles a few hundred metres off the main banks of the river, where Garbaccio’s home base — Kanyemba Lodge — has been making a name for itself as a prime attraction for the South African fishing and safari market. Here on the Zambezi the fish in question is tiger — and it has to be said that there are a lot of them, just waiting to be caught. Every few minutes they jump from the river, as if to taunt the angler into grabbing rod and tackle and making a day of it.

On the island, making a day of it means kicking back and relaxing in a marvellously informal bush camp, watching nature in all her glory as she unfolds an unending cavalcade of the weird and the wonderful in front of you. The prime directive? Unwind. The major decisions to be made? Whether to fish or to take a slow cruise up the river to view game. Or just sit and have another beer.
“So, what do you want to do, madam?” Garbaccio asks as the resident pod of hippos begin their mid-afternoon chorus of grunts and groans. “I don’t know. You choose,” I answer. He does, and we soon find ourselves on a boat, drifting along the banks of the river, watching elephants crossing from Zambia to neighbouring Zimbabwe.

The Lower Zambezi stretches from below Kariba Dam all the way to the border with Mozambique and the Cahora Bassa Dam. The river is fat and lazy here, reaching a few kilometres wide in places, and dotted with islands like Kanyemba against a backcloth of mountains. A handful of lodges dot the river’s banks offering a range of accommodation options from camping right the way through to five-star, all-singing, all-dancing tented luxury.

A few hours downstream lies the Chiawa Partnership Park — a new conservation initiative between lodge owners and the local community — and the Lower Zambezi National Park. These areas are where the land-based game-viewing activities take place and the home of most of the major African predators and a healthy population of elephants. It’s here I am headed for — a full-day safari before moving camp to Kasaka River Lodge.

Garbaccio pulls me from my warm bed at first light to pump me full of coffee and dump me on the boat that will transfer me to Kasaka and a trip to “Hippo City” — aka the Chifungulu Channel — a three-hour drive inside the national park. It’s an adventure of gargantuan proportions that comes complete with lions, a leopard on a kill and, yes, lots of hippo, before depositing me at Kasaka where I am met by new owner and Lower Zambezi legend Chris Liebenberg, who also owns the award-winning Chongwe River Camp a short distance away.

Kasaka is a tented camp and is being firmly aimed at the family market, with a particular eye on South Africans. “It’s great here,” says Liebenberg. “There’s so much to do and see, and it’s only a couple of hours from Jo’burg, and a hell of a lot more authentic than a lot of South Africa’s reserves,” he grins.

Authentic indeed, and without any barrier between guest and the great outdoors. None of the lodges here is fenced, meaning that wildlife often end up right on your doorstep without you even having to leave camp.

A few days in this paradise and I am soon convinced that Liebenberg is right. There’s a beauty here in the Lower Zambezi that is definitely lacking in the majority of over-managed South African reserves. It makes it special. And worth leaving sunny South Africa for. Indeed, Zambia’s selling point is that it’s the “real” Africa, and I am inclined to agree. And crown the Lower Zambezi the “real” Zambia.

Getting there
The Lower Zambezi Valley is an easy journey from Johannesburg, with about an hour’s flight to the Zambian capital of Lusaka followed by a short 25-minute hop by small plane. Zambezi Airlines runs daily scheduled flights from OR Tambo International Airport to Lusaka and Proflight offers scheduled services into the valley. Visit www.flyzambezi.com and www.proflight-zambia.com for more information on flights.
For information on accommodation visit www.kanyemba.com or www.kasakariverlodge.com.