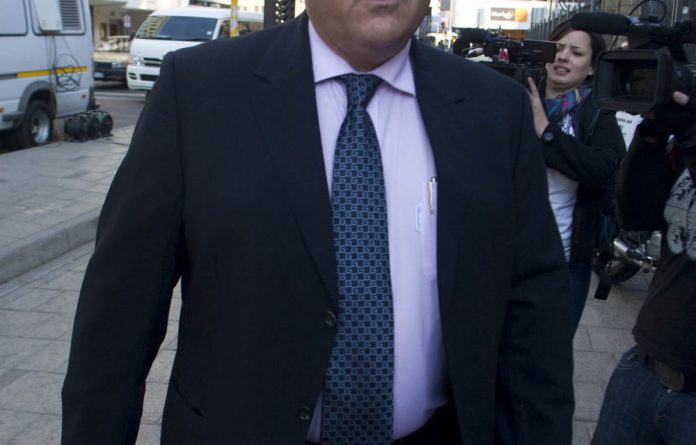 Agliotti is on trial for the murder of mining magnate Brett Kebble in September 2005.

“I put it to you that no court can ever rely on your testimony,” Hodes told Christopher in one of many heated exchanges.

Christopher introduced Agliotti to Guy Kebble, and subsequently to his brother Brett, after he befriended him when one of his employees “drove into the back of Agliotti’s wife’s car”, he said. He told the court that he “grew up with Brett Kebble in the Free State”.

During cross examination Christopher said that upon the request of Clinton Nassif, former security head for the Kebbles, he called Agliotti’s ex-wife Vivienne in November 2006, a month after Agliotti had been arrested for Kebble’s murder. He asked her to meet with Nassif on the sixth floor of the parking lot of the Hyde Park shopping centre.

Christopher owns a restaurant in the centre, Willoughby’s, and is also part owner of the Italian restaurant Assaggi in Illovo.

Hodes told Christopher that he was “lying” and “hiding things”, and said he had lied to Agliotti’s ex-wife, and told her to come and meet him, and not Nassif. He said she had started crying because she was shocked at meeting Nassif, who allegedly gave her a message to “tell the accused to dovetail his version”.

Agliotti was in custody at the Sandton police station at the time.

“Nassif is a big guy,” said Hodes. “How would you feel if you came to a parking lot and a man like Nassif stepped out from behind a pillar?”

Earlier, Christopher testified that he had dinner at Assaggi with Agliotti the night before Kebble was killed, and that Agliotti had fielded numerous calls from Kebble, before leaving to meet him.

“[Agliotti] said Kebble owed him some money and he needed to sort it out,” Christopher told the court.

On Wednesday morning, the court heard testimonies from former chief investment officer at Allan Gray, Stephen Mildenhall, who was allegedly shot on instruction from Nassif in 2005, and from Faizel “Kappie” Smith, one of the men allegedly involved in the Kebble murder and the orchestration of the shooting of Mildenhall.

Agliotti has pleaded not guilty to four charges.

State prosecutor Dan Dakana added two more charges to the indictment against Agliotti on Monday morning. They are the attempted murder of Mildenhall and conspiracy to murder Mildenhall and mining bosses Danie Nortier, Mark Bristow and Mark Wellesley-Wood.

The two initial charges against Agliotti are the murder of Kebble and conspiracy to murder Kebble.

The Scorpions, who took over the murder investigation from the police in 2006, came under fire for dishing out indemnity agreements to Nassif, Schultz and other people implicated in the murder.

The state has argued that Agliotti and Kebble’s former business associate, John Stratton, were the masterminds behind the hit.

Agliotti will not be prosecuted by state prosecutor Gerrie Nel, who headed the Scorpions’ investigation into the criminal network around Kebble.

National Prosecuting Authority boss Menzi Simelane removed Nel and his team from the case earlier this year to focus on prosecuting Selebi.

The M&G Centre for Investigative Journalism, supported by M&G Media and the Open Society Foundation for South Africa, produced this story.”www.amabhungane.co.za.