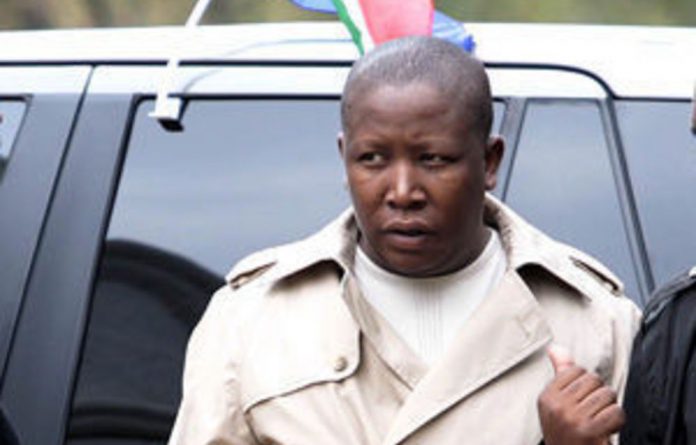 There were also attempts to include Boshielo and Manthata into a multimillion-rand North West medical waste contract and a new four-year contract for medical waste management in Limpopo.

Limpopo is Malema’s home province and he and Mathale wield considerable political power there.

The Mail & Guardian is in possession of three signed contracts showing the close relationship between Manthata, Boshielo and waste management baron David Sekete, whose Buhle Waste company is a major player in the medical waste industry.

Malema denied this week that Boshielo was fronting for him and Mathale said Manthata, his business partner in three entities, did not have to report to him about his business transactions.

Pinky Mokoto, a prominent North West ANC politician and mayor of the Ngaka Modiri Molema district municipality, which includes Mafikeng, was cut into the North West deal by Buhle Waste.

Sekete defended his relationship with politically connected partners, saying Buhle Waste was owned by people “who all happen to belong to the ANC” and that it “so happens that the youth who approached us are members of the ANC Youth League”.

Boshielo is a prominent youth league member who sat on the board of the league’s investment arm, Lembede Investment Holdings, before it was “systematically dissolved” this year.

Although permanently based in Polokwane, Boshielo often stays at Malema’s Sandown house when he visits Johannesburg, a mutual friend of the two men told the M&G. Asked to comment, Malema’s spokesperson Floyd Shivambu said: “None of your business.”

Manthata and Mathale are linked through their shared interests in two close corporations, Bollanoto 322 Copper Mine and Uereka Resource, and a private company, Emerald Sky Trading 18.

The M&G reported in July that Malema’s Blue Nightingale Trading 61 was originally given a 3% stake in Tshumisano Waste Management, a company awarded a five-year R200-million tender by the Limpopo health department in 2005 for the removal, treatment and disposal of medical waste from hospitals.

Malema, provincial secretary of the youth league at the time, was bought out of the company for less than R150 000 in 2006.

Tshumisano was established to get the Limpopo tender. Apart from Malema, it included Buhle Waste, Medicare Process Technologies and Afrimedicals.

Tshumisano was awarded a second government tender in August 2008 by the North West health department to deliver similar services for 16 months.

According to the agreement, in the M&G‘s possession, Tshumisano agreed to pay Silver Meadow Trading a retaining fee of R170 000 a month minus a 20% management fee, meaning that the company will have made more than R2,4-million from the deal when Tshumisano’s contract ends in November.

Four months later, in August 2009, North West advertised a four-year tender for the removal and disposal of medical waste.

The M&G has in its possession a memorandum of understanding signed by four parties — Buhle Waste, Boshielo and Manthata’s Mercuritech and Pinky Mokoto’s Makgoloke Engineering and Projects — on August 19 and 21. The document details each party’s share in the joint venture and acknowledges Buhle Waste as the “leading contractor”.

This week Sekete denied that Mercuritech eventually formed part of the North West tender. He provided the M&G with another agreement entered into between Buhle Waste and Makgoloke on August 22 last year — 12 days before Mokoto was appointed mayor.

Sekete defended Mokoto’s inclusion in the tender. “[Mokoto] was an ANC MP until April 13 2009. At the time we met her she was running her own businesses and was no longer a government employee.

“Thus, when the North West tender closed in August 2009, she was not holding any public service job,” Sekete said.

According to him, she has “never put in any money to capitalise the North West project and has not received any payments from us”.

Sekete admitted only to meeting Mokoto at the tender briefing session. “She has added value, recruiting staff and ensuring training takes place.”

Mokoto did not respond to questions.

The third document leaked to the M&G is a joint venture agreement between Buhle Waste and Limpopo Medical Waste, the company previously known as Silver Meadow Trading.

The purpose of this was to tender as one for the new Limpopo medical waste contract, advertised in January this year, which was previously held by Tshumisano. According to the document, signed on April 7, Limpopo Medical Waste’s share of the deal would have been 75% and Buhle Waste’s 25%.

Sekete defended this arrangement, saying it was made “for empowerment purposes without a preconceived notion of using political influence as criteria. Our aim has been to transfer skills to local business partners who in turn could recruit the unemployed youth to work in the medical waste industry throughout the country.”

Following reports that politically connected businessmen were in line for the tender, the process was cancelled by the Limpopo health department and Tshumisano’s contract was extended by six months, until November this year.

The official reason given for the cancellation of the tender was that there were minor errors in the tender document. A new round of tenders is under consideration.

On the subject of Manthata, Matale’s spokesperson, Phuti Mosomane, said in a statement: “In conducting his affairs as a businessman, Manthata does not have to report to the premier about the transactions that he is making.

“At the same breath the premier does not have to report to Manthata on his business affairs.”

Shivambu, told the M&G this week that Malema had nothing to do with Boshielo’s interests in the medical waste industry and did not lobby for his friend to be given tenders.

“Our industry is a dirty little business,” a major player in the medical waste treatment industry told the M&G this week.

The industry is notorious for illegal dumping. The media have recently carried numerous reports of children being injured while playing near dumped material.

Illegally stored placentas and syringes were found in a warehouse in Gauteng three years ago.

In the past five years the Green Scorpions have launched 14 criminal investigations into medical waste companies for environmental transgressions. They have charged company directors and an employee of waste treatment plant Aid Safe Waste.

Buhle Waste chairperson David Sekete and Springbok prop Johan le Roux, who is notorious for biting the ear of an All Black player, are two of the Aid Safe directors facing trial. Both have pleaded not guilty, but the company is currently negotiating a plea bargain with the National Prosecuting Authority.

According to the industry insider: “The problem is that some companies are getting contracts from provinces when they don’t have the capacity to handle the waste and have to subcontract it to other waste treatment plants that ­struggle.” Dumping and illegal storage occurs in these circumstances, he said.

The auditor general investigated the industry three years ago, while the department of environmental affairs also commissioned a study.

Albi Modise, the department’s chief director of communications, said medical waste has been identified as a national priority. “The sector is generally not supported by extensive capital investment and can become vulnerable when treatment facilities break down as transporters are required to seek alternative treatment facilities,” Modise said.

“Contracts have been awarded to several transporters who do not own their own treatment facilities.”

Based on a 2007 study by the department, there is currently “reserve capacity” for waste treatment in South Africa.

Yolandi Groenewald
Yolandi Groenewald is a South African environmental reporter, particularly experienced in the investigative field. After 10 years at the Mail & Guardian, she signed on with City Press in 2011. Her investigative environmental features have been recognised with numerous national journalism awards. Her coverage revolves around climate change politics, land reform, polluting mines, and environmental health. The world’s journey to find a deal to address climate change has shaped her career to a great degree. Yolandi attended her first climate change conference in Montreal in 2005. In the last decade, she has been present at seven of the COP’s, including the all-important COP15 in Copenhagen in 2009. South Africa’s own addiction to coal in the midst of these talks has featured prominently in her reports.
Facebook
Twitter
WhatsApp
Linkedin
ReddIt
Email
Print