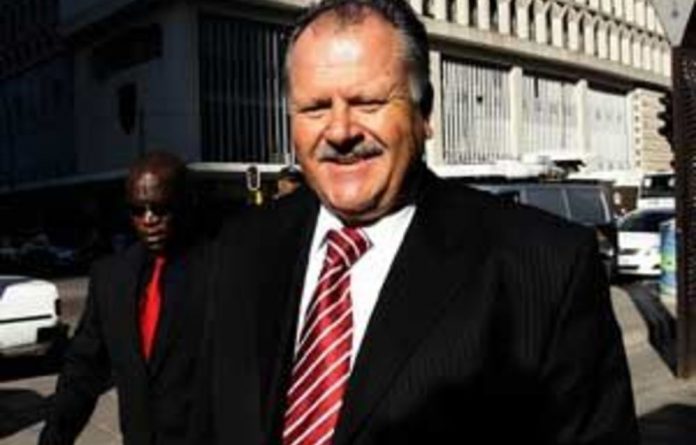 The squeeze on Glenn Agliotti — key witness against Jackie Selebi and lone defendant in the Brett Kebble murder trial — is far from over.

The Mail & Guardian has learned that two execution judgements were obtained against Agliotti by the South African Revenue Service (Sars) in the North Gauteng High Court on July 22 this year.

The Sars action may provide further clues to how part of the Kebble fortune might have found its way offshore.

Sars has declined to comment on Agliotti’s tax affairs but, according to copies of the judgement obtained by the M&G from the court in Pretoria, the R60-million claim relates to assessed tax for 2003 to 2008 of R38-million, plus interest and penalties.

The R17-million is made up of R13,6-million in tax plus interest and penalties, but it is not clear if it relates to Agliotti’s earnings in 2009 or some other assessment.

To add insult to injury, an advertisement appeared in Beeld on September 10 indicating that the Brits sheriff was to hold a sale in execution on Friday September 17 of household items belonging to Agliotti and seized in terms of the Sars judgements.

The advertisement lists ornaments, clocks, a small wooden sailboat, a golfcart, as well as an assortment of household appliances. It is understood that the goods were removed at the end of August from Agliotti’s rented home at the Pecanwood estate on Hartbeespoort Dam. He occupies the house with his wife, Lelani.

The enormous sums disclosed by Sars call into question the true extent and source of Agliotti’s income. Agliotti has described himself in vague terms as a commodity trader, but in his own affidavits he implicates himself in instances of drug and cigarette smuggling. The M&G reported that in July this year two criminal charges of fraud and tax evasion were laid by Sars against Agliotti. It is understood that as least part of the case relates to money held in an offshore account or accounts.

During the M&G‘s long-running investigation into Agliotti, Kebble and Selebi, several sources alleged that Agliotti had been party to large transfers of money overseas.

One source with knowledge of Agliotti’s financial affairs told the M&G at the time: “Agliotti had a Nedbank account in the name of Care Products … on this account he transferred millions out of the country.”

The same source claimed a Nedbank account — possibly the same one — had been used to transfer $50-million out of the country on behalf of Brett Kebble and was placed in an account in Zurich, Switzerland.

The source suggested that this might provide an alternative scenario to the “assisted suicide” story since put forward by Kebble’s killers at Agliotti’s trial.

Another source, an associate of Kebble’s former security adviser Clint Nassif, gave a different version: “Story has it that Brett Kebble gave Glenn Agliotti and Clint Nassif R50-million to convert to US currency, basically to get the money undetect[ed] out the country; this was going to be done by purchasing clean-cut diamonds in South Africa.” The diamonds would then be sold offshore. It is difficult to substantiate these rumours. The forensic report on the massive thefts that took place under Kebble’s regime at JCI has not been made public by the company.

What did emerge from Selebi’s trial is that JCI and related entities transferred a total of about R40-million to a shelf company, Spring Lights 6, controlled by Agliotti. This was used to fund various covert activities on behalf of Kebble, including payments to Selebi and Nassif.

Another roughly R10-million was paid from a JCI affiliate to another company controlled by Agliotti, Misty Mountains Trading 18.

Attempts to obtain comment from Agliotti through his legal representative were unsuccessful.