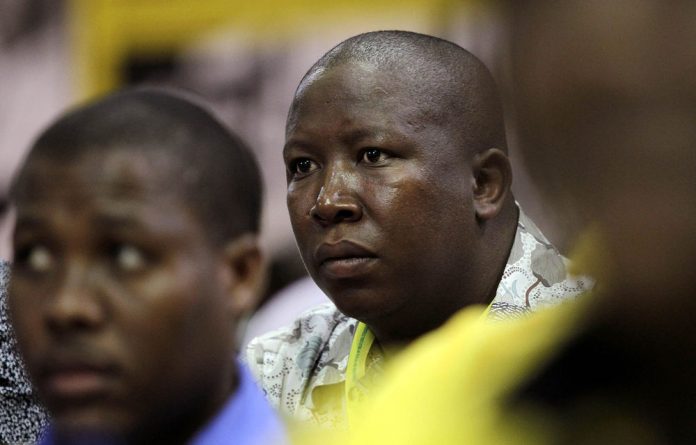 ANC president Jacob Zuma was applauded widely when his frank opening speech on Monday brought the ANC Youth League into line, but the league claimed moral victory later when its nationalisation proposals were largely endorsed.

The youth league started the ANC’s mid-term policy review on the back foot after Zuma reprimanded league president Julius Malema in his ­political report.

But the league’s caucus then ­refocused. It had planned to raise the ANC disciplinary committee’s verdict on Malema — guilty of provoking divisions in the party — but then shifted its energies to the nationalisation debate.

According to three different party sources, the closed-door session agreed that nationalisation should be investigated further.

A Limpopo delegate who was part of the commission’s discussions said that focusing on nationalisation was the league’s best comeback strategy after Zuma’s Monday reprimand. “The youth league realised it was left with one leg to stand on — nationalisation. What they wanted to do was to save Malema’s face by winning the one big thing even if they lost on others.”

The league’s caucus decided to pack the economic transformation commission with its leaders and delegates — about 70 of them. M&G sources said that in the commission the league took on Netshitenzhe, Manuel and Godongwana when it argued that more time be allocated for a better-researched debate on nationalisation.

“Joel Netshitenzhe irked the youth league when he started talking about how nationalisation did not work for Russia and other countries he lived in as an exile,” said a party source.

Malema apparently told Netshitenzhe that living in Russian camps as an exile did not make him knowledgeable on the country’s economy because he had not participated in it.

“Netshitenzhe made a mistake: he underestimated the people who were coming after him,” the source said.

Another ANC delegate who formed part of the commission said Irvin Jim offered the commission an analogy: there’s no point in owning a tree if you do not own the fruits. “What he meant was that the state cannot just own mineral rights if it does not own the minerals,” the delegate said.

But a delegate who supports ANC secretary general Gwede Mantashe said the youth league would not get exactly what it wants on ­nationalisation.

“The agreement on nationalisation was reached under duress by delegates who did not want the league to continue its onslaught on senior leaders,” said the delegate. “They vilified everyone.”

Although ANC top brass worked hard to ensure the mid-term policy review was not used as a launching pad for a 2012 leadership struggle, it was clear that most delegates used policy debates to build platforms for their preferred candidates.

Some delegates used songs for the same purpose. The youth league sang Solomon, a song about late Umkhonto weSizwe cadre Solomon Mahlangu, to drive home its message about generational mix.

“When we sing about Solomon, we are referring to [Deputy Police Minister Fikile] Mbalula. The song sends a message that young people are ready to take over. But we cannot use Mbalula’s name because we are not yet allowed to do that,” said a member of the youth league group lobbying for Mbalula to replace Mantashe as ANC secretary general in 2012.

Those who want Mantashe to retain his position sang Sifuna iSG ene content yamakhomanisi — meaning they want a secretary general who is a communist and has a strong socialist agenda.

Political observers believe that if the ANC adopts a resolution on nationalisation, this would be a major boost for Mbalula’s candidacy. The youth league also plans to ditch Zuma as ANC president and support deputy president Kgalema Motlanthe for the party’s top position.

Although Cosatu and the SACP supported the nationalisation of mines, they have made it clear they want Mantashe and Zuma to be re-elected to their positions.

The other key resolution was that Postbank should spread its wings. “The Post Office bank must be granted a licence to work like any other bank,” a source with close ties to the youth league said. “This will help the government to own a bank that will compete with the big four banks.”

At present Postbank operates as a division of the South African Post Office and is much smaller than the country’s four major banks.

Mantashe came in for jibes when his report came before the NGC and had to be amended in the youth league’s favour before it was adopted: Mantashe had omitted youth league successes, such as the hosting of its first national general council.

Another victory for the league concerned disciplinary procedures, about which the secretary general’s report also had to be changed to include. ANC members sympathetic to the youth league had complained that party discipline was applied selectively.