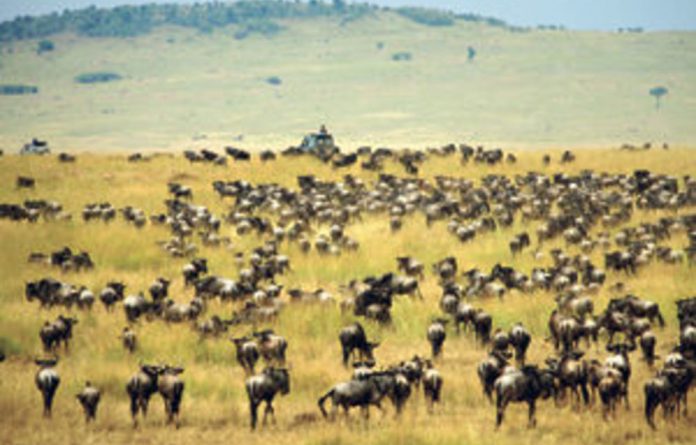 The world’s greatest migration spectacle — the annual charge of nearly two million wildebeest, zebra and other mammals across East Africa — is under threat from plans to build a road across their route.

Twenty-seven conservation experts from around the world have put their names to a two-page article in the journal Nature condemning the plan, adding to growing international concern including thousands of signatures on petitions opposing the Tanzanian government’s project.

Barring the herds from their traditional dry-season feeding grounds to the north would, the scientists argue, lead to population crashes in the prey species — and the predators that depend on them.

The scheme could also lead to the “collapse” of the entire Serengeti ecosystem, from the vegetation that acts as a massive store of carbon dioxide to the world-famous sight of wild dogs, rhinoceros, lions and cheetah.

“The proposed road could lead to the collapse of the largest remaining migratory system on Earth — a system that drives Tanzania’s tourism trade and supports thousands of people,” conclude the authors. “Such a collapse would be exceedingly regrettable for a country that has consistently been a world leader in conservation.”

The United Nations Educational, Scientific and Cultural Organisation (Unesco) has also issued a statement saying it has “utmost concern” about the proposed road, and warning “it could result in irreversible damage to the property’s ‘outstanding universal value’.”

In a move that has prompted speculation that Unesco could strip the Serengeti of its status as a world heritage site if the road is built, the body has also asked for a report on “the state of conservation” to consider at its 2011 annual meeting.

The planned 53km road linking Lake Victoria to highways to the east coast ports and capital, Dar es Salaam, was announced during the 2005 national election of President Jakaya Kikwete, and is scheduled to begin construction in 2012.

The authors of the letter published in Nature argue that, once built, the gravel road will attract faster and heavier trucks, including at night, leading to a growing number of collisions with wild animals; this in turn will lead to pressure for a tarmac road surface and a fence along the route, physically barring the great migration route.

In addition, control over the road and 50m on either side would be transferred from the national park authority to the roads department, he said. Instead, opponents — including conservationists working in Tanzania and the tourist industry in Kenya, which fears it will also suffer a great loss of wild animals — want the government to consider an alternative route to the south of the park.

Though the lorries would have to travel further, there would be a similar length of road to construct to link existing highways; the income from 90 000 annual tourists to these and other connected game parks would be protected; and five to eight times as many people would benefit from links to trade in a more populated region of the country, they say. —