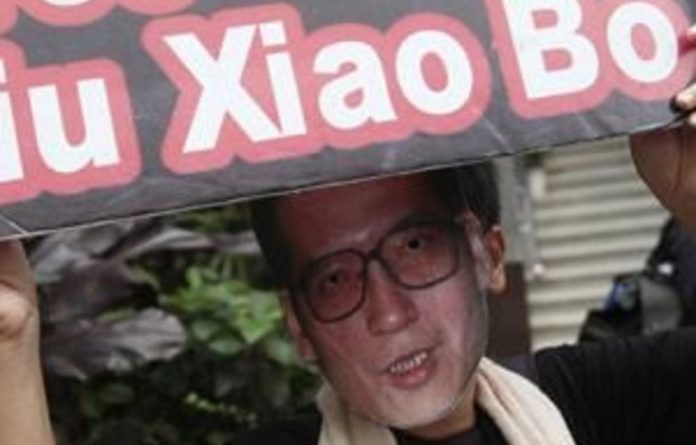 The comments came after his wife, Liu Xia, complained bitterly on Wednesday over her “illegal house arrest”, a move that had already drawn a rebuke from Washington and Brussels.

She has been largely confined to her Beijing home since Friday, when Oslo’s Nobel Committee awarded this year’s peace prize to her dissident husband for his advocacy of political reform and human rights in one-party China.

Japanese Prime Minister Naoto Kan on Thursday added his voice to those urging the release of the 54-year-old writer and former professor, risking Beijing’s ire just as Japan and China seek to put a damaging diplomatic spat behind them.

“From the viewpoint that universal human rights should be protected across national borders, it is desirable” that Liu be released, Kan told his Parliament.

“I think it is important that human rights and fundamental freedoms, which are universal values, should also be guaranteed in China.”

China broke off high-level contact with Tokyo last month after Japan detained a Chinese fishing boat captain whose vessel collided with Japanese coastguard patrol ships in waters claimed by both sides in the East China Sea.

However, the two close trading partners have recently taken steps to patch up the row.

Fury
China has reacted with fury to the Nobel award, directing the brunt of its anger at Oslo by cancelling ministerial meetings and a Norwegian musical scheduled to be staged in the country next month.

Oslo on Wednesday criticised the cancellations and said Norway wanted to continue its positive relationship with China.

“If this decision is the consequence of the awarding of the Nobel peace prize, we consider this an inappropriate reaction,” Norwegian foreign ministry spokesperson Ragnhild Imerslund said.

On Thursday, the state-run English-language Global Times newspaper said the Nobel award was part of a Western “ideological war” against China.

“They even hope that China will one day collapse under the West’s ideological crusade,” said the editorial, intended for foreign audiences.

Chinese-language state press has remained muted on the award as Beijing attempts to impose an information blackout on the news in China.

Liu Xiaobo was sentenced in December to 11 years in jail on subversion charges in what was widely seen as retaliation for his authoring an appeal for political reform and respect for human rights.

China’s Communist Party has an iron grip on political power in the country and its human rights record and treatment of government critics is frequently criticised by activists at home as well as by foreign governments.

‘Illegal house arrest’
The United States and the European Union have called for the dissident’s release and urged Beijing to lift restrictions on Liu Xia.

She has had her telephones cut off by authorities but has issued periodic statements on Twitter.

Twitter is blocked in China but accessible to those who know how to access proxy servers that allow users to circumvent the secretive Communist government’s huge censorship apparatus.

“I strongly protest against the government for my illegal house arrest,” Liu Xia said in a tweet on Wednesday, calling her situation “very hard to take”.

Her lawyers told Agence France-Presse on Thursday that she remained unreachable by phone.

Liu Xia has expressed the hope that she would be able to travel to Norway to accept the award on her husband’s behalf, while saying authorities were unlikely to allow it.

Kan said he would be “watching whether he [Liu Xiaobo] will be able to attend the Nobel Prize award ceremony or whether his wife or family members will attend”.

However, Liu Xia told the Apple Daily the jailed dissident would not plead guilty or strike a deal with Chinese authorities in order to leave the country to collect his award. — AFP