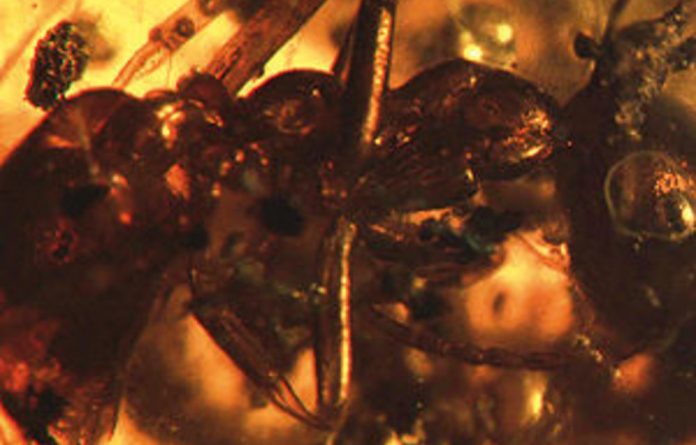 Hundreds of prehistoric insects and other creatures have been discovered in a large haul of amber excavated from a coal mine in western India.

An international team of fossil hunters recovered 150kg of the resin from Cambay Shale in Gujarat province, making it one of the largest amber collections on record.

The tiny animals became entombed in the fossilised tree resin about 52-million years ago, before the Indian subcontinent crunched into Asia to produce the Himalayan mountain range.

Jes Rust, a paleontologist at Bonn University, said the creatures, including ancient bees, spiders, termites, gnats, ants and flies, were in remarkably good condition considering their age. In total, the team has identified more than 700 arthropods, a group of animals that includes insects, crustaceans and arachnids.

“They are so well preserved. It’s like having the complete dinosaur, not just the bones. You can see all the surface details on their bodies and wings. It’s fantastic,” Rust told the Guardian. The remains of two praying mantises were also found.

Insects trapped in resin
Insects and other small animals may be trapped in resin flowing down tree bark, or as it covers their dead bodies on the forest floor. The resin hardens into a translucent yellow material that preserves them.

The amber is the oldest evidence scientists have of tropical forests in Asia. Tests linked the material to a family of hardwood trees called dipterocarpaceae, that make up 80% of the forest canopy in southeast Asia. Fossilised wood from these trees was found alongside the amber deposits.

Rust said that much of India may have been covered in forests at the time the amber formed.

The trapped insects give a revealing snapshot of life in India before it collided with Asia. India was once attached to Africa, but separated about 160-million years ago. For the next 100-million years, India’s landmass moved towards Asia at about 20cm a year.

India was isolated for so long it could have evolved unique flora and fauna, but the encased insects suggest this did not happen.

Writing in the US journal, ­Proceedings of the National Academy of Sciences, the team said life forms in the amber are closely related to those in Asia and Europe.

As India moved towards Asia, the encroaching continental plates may have created an arc of islands that connected the two land masses like stepping stones long before 50-million years ago, said Rust. This would allow species from India, Asia and Europe to mix. —

Lifetime Award for achievement by an individual

Editorial: Our moment of reckoning is now