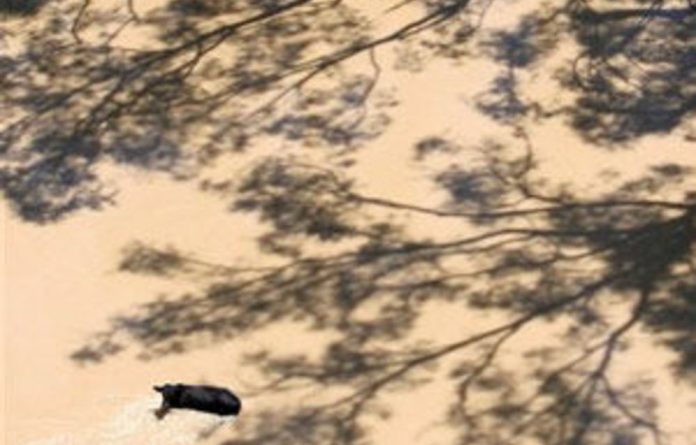 Thousands of people were urged to leave the outskirts of Australia’s third-largest city, Brisbane, on Tuesday as flood waters raced eastwards after a surging two-metre wall of water killed eight people overnight.

Cars and pedestrians were swept away on Monday night when a “super rainstorm” sent water charging through the streets of Toowoomba, west of Brisbane. Police said more than 40 people were pulled from rooftops by helicopters, but by mid-afternoon 66 were still missing.

Traffic jams formed in central Brisbane as people headed out by car amid heavy rains and initial flooding. Brisbane Mayor Campbell Newman said 6 500 homes, businesses and properties would be flooded by Thursday.

“The situation has obviously demonstrably deteriorated, Newman told a news conference. “Today is very significant, tomorrow is bad, and Thursday is going to be devastating for the residents and businesses affected.”

He said Brisbane’s main dam, which had so far protected the city from flooding, was full and authorities now had to release water which would send floods into Brisbane.

Authorities fear the Brisbane flooding may be worse than devastating floods in 1974, when the Brisbane River burst its banks, flooding thousands of homes and killing 14 people.

Workers deserted high-rise office towers in the centre of the city as constant rain continued to swell the Brisbane River, which was lapping boardwalks and riverbank buildings.

“It’s taking on new proportions and getting worse by the minute,” said Gary McGowan, a businessman who lives and works in a western suburb of the city. “I wasn’t concerned until an hour or so ago but it’s getting serious now,” he added, noting that boats and pontoons were being swept away.

The worst flooding in the coal-exporting state of Queensland in half a century has at times covered an area the size of France and Germany combined and has killed at least 13 people.

The Australian dollar sank to a three-week low on Tuesday on concerns that Queensland’s flooded coal mines may take months to return to normal production and economic analysts said the floods would hit Australia’s economic growth.

Prime Minister Julia Gillard said the flooding would not derail an expected budget surplus in 2012/13.

The Queensland deluge has been blamed on a La Niña weather pattern in the Pacific, with Australia recording its third-wettest year on record in 2010, with two wet-season months to go. Weather officials are also forecasting an above average cyclone season.

“The Queensland floods are caused by what is one of the strongest, if not the strongest, La Niña events since our records began in the late 19th century,” said Professor Neville Nicholls, an environmental science expert at Monash University.

Residents sandbag homes
Television footage showed brown floodwater gushing through the centre of Toowoomba on Monday laden with debris, as people clung to telephone poles and rooftops to survive.

Panicked motorists climbed on to cars to escape the deluge, which destroyed homes and bridges, and hurled cars into trees and buildings like corks.

“Early reports would indicate that what hit Toowoomba could best be described as an inland, instant tsunami, with a massive wall of water that’s gone down through the Lockyer Valley,” police commissioner Bob Atkinson said.

Police warned people living in up to 32 low-lying Brisbane River suburbs and further west to head to high ground as a second day of torrential rain was expected to see rivers eventually swell by up to 19m in height.

Some parts of the city outskirts were being evacuated, while crocodiles at a nearby Sunshine Coast zoo founded by the late television wildlife star Steve Irwin were being tied up in case they escaped in the deluge.

Local Brisbane woman Julia Zhu piled sandbags into a Mercedes and made plans to defend her high-end gown business in a low-lying part of the city,

“We have half-a-million dollars worth of stock and no insurance cover,” Zhu told Reuters.

Damage caused by floods in Queensland that started after heavy rains before Christmas could reach $6-billion after destroying homes, roads and rail lines, and severely cut the exports from the state’s key coal mining sector, economists say.

Coal seam gas drilling in the Surat Basin, a big source of gas for an estimated $200-billion in proposed liquefied natural gas projects, was halted on Monday by flooding.

Global miners Anglo American, Rio Tinto, Xstrata and BHP Billiton, have been hit by the floods, and all have made force majeure declarations, which release firms from delivery commitments.

Flooding has begun to recede in the main Bowen Basin coal region, but many mines remain flooded and will take weeks to drain and resume full production. While some rail links between mines and the ports have been opened, others are under water.

Coal stocks were running low at the key coal port of Dalrymple Bay, but it was receiving enough to keep loading ships, while the port of Gladstone said it could be days to weeks before it starts getting coal supplies back to normal.

Hotel operators said the rain had caused cancellations in popular tourist strips on the Sunshine and Gold coasts, which claim a large slice of the $32-billion tourism industry. – Reuters

They took time, but the International Olympic Committee have finally done the responsible thing and postponed Tokyo 2020
Read more
Advertising