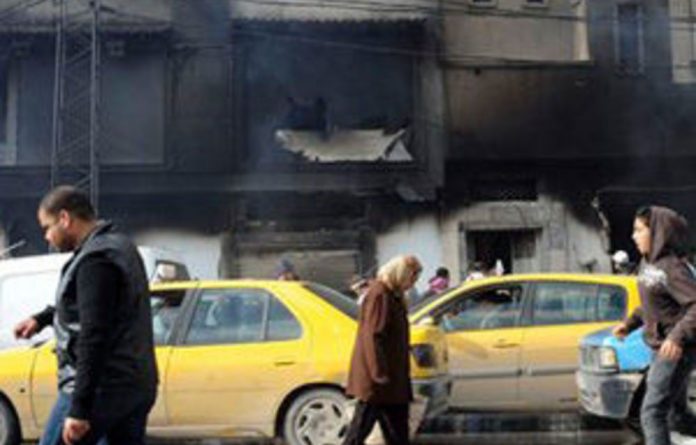 Gunshots were heard in the centre of Tunis on Thursday, a Reuters reporter said, after one man was killed in clashes with police in the city overnight.

Black smoke billowed into the sky as people covered their mouths against the fumes and police blocked off the area.

The latest clashes in anti-government protests that began nearly a month ago were taking place a short distance from the central bank building in the city’s main commercial area, also the location of the main bus and tram station.

“There was a protest and police used tear gas and gunfire to disperse the crowds,” said a witness in a nearby street.

All shops were closed with their shutters down and armed soldiers, brought in to reinforce the police, stood guard outside government buildings behind banks of razor wire.

State television said President Zine al-Abidine Ben Ali, facing the biggest challenge to his rule since he took office over 23 years ago, would make an address later in the day.

People taking part in the unrest say they are angry about unemployment, corruption and what they say is government repression. Officials say the protests have been hijacked by a minority of violent extremists who want to undermine Tunisia.

The latest official count for the number of civilians killed in the unrest is 23. But witnesses told Reuters on Wednesday another five had been killed, while the United Nations said rights groups put the toll at almost 40.

UN High Commissioner for Human Rights Navi Pillay said the deaths were “a result of some excessive measures used, such as snipers [and] the indiscriminate killing of peaceful protesters”.

The government says police have only fired in self-defence when rioters attacked with petrol bombs and sticks. It also says death tolls from rights groups are inflated.

On Wednesday Ben Ali sacked his interior minister and ordered the release of arrested rioters but protesters said that was not enough to meet their demands.

The government ordered the suspension of all sports event for the week, official media reported.

A night curfew for Tunis and suburbs began at 8pm (7pm GMT) on Wednesday, the first time it had come into operation.

But for several hours after that, crowds in at least two neighbourhoods of the city threw stones at police and ransacked buildings, Reuters reporters at the scene and witnesses said.

A resident of the working class Ettadamen suburb, 25-year-old Mejdi Nasri, was shot in the head by a stray bullet as he tried to reach his home, members of his family said.

It was the first time since the wave of unrest broke out that anyone had been killed in the capital. Asked to confirm the death, officials said they could not immediately comment.

A Reuters reporter said angry crowds later gathered in the suburb. Shots could be heard and a police helicopter was flying overhead.

Freedom
In the provincial town of Sidi Bouzid several witnesses told Reuters by telephone that between 7 000 and 10 000 people were marching through the streets.

Asked what slogans the crowd were shouting, one witness, who did not want to be named, told Reuters: “It is not just about unemployment any more. It’s about freedom of expression, freedom of assembly, all the freedoms.”

Some analysts say the Tunisian government is likely to be able to contain the unrest, but that in the longer term Ben Ali could find himself weakened and his opponents emboldened.

The protests are being watched closely in other countries in the Arab world with the potential for social unrest, especially after rises in world food prices.

Financial markets have also been alarmed by the unrest in Tunisia, one of the region’s most open economies, which has been attracting steady interest from foreign investors.

Tourism, which accounted for 11% of Tunisia’s hard currency earnings last year, may become vulnerable to the unrest. On Thursday The Netherlands issued a statement advising against all non-essential travel to Tunisia.