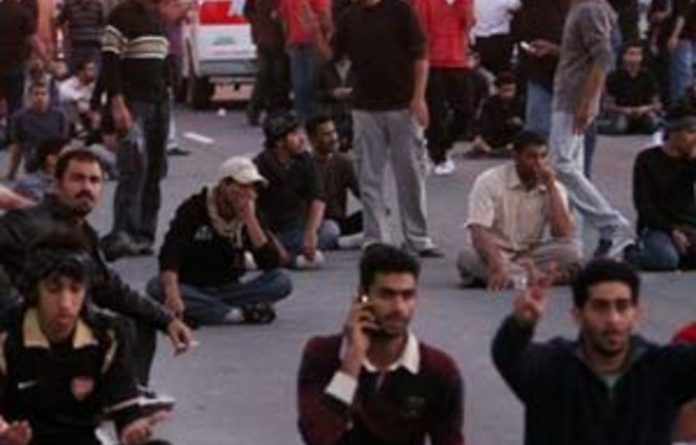 Bahraini security forces shot at protesters near Pearl Square on Friday and wounded at least 23, a former Shi’ite lawmaker said, a day after police forcibly cleared a protest camp from the traffic circle in Manama.

“We think it was the army,” said Sayed Hadi, of Wefaq, the main Shi’ite bloc, which resigned from parliament on Thursday.

The shooting took place on a day of mourning on which Shi’ites buried four protesters killed in the police raid on Pearl Square.

It also coincided with an appeal for calm and dialogue from the crown prince, Sheikh Salman bin Hamad al-Khalifa. “I respect Wefaq, as I respect others. Today is the time to sit down and hold a dialogue, not to fight,” he said on Bahrain TV.

Another Wefaq MP, Jalal Firooz, said demonstrators had been elsewhere, marking the death of a protester killed earlier this week when riot police fired tear gas at protesters.

The crowd then made for Pearl Square, where army troops who took it over after the police raid opened fire, Firooz said.

Police had no immediate comment. Witnesses said about 20 police cars had driven to the square after the initial shooting.

Lebanon’s Hezbollah-run al-Manar television quoted a doctor at Salmaniya hospital in Manama as saying 25 wounded had been admitted, two of them with serious wounds.

“This is a peaceful protest,” the doctor, Mahmoud Abbas, told al-Manar. “How can it be confronted with bullets? There is a humanitarian disaster. We cannot handle this.”

Four people were killed and 231 wounded when riot police raided the protest camp early on Thursday, when most of the demonstrators were sleeping.

Soldiers in tanks and armoured vehicles later took control of the square, which the mainly Shi’ite protesters had hoped to use as a base like Cairo’s Tahrir Square, the heart of protests that toppled Egyptian President Hosni Mubarak on February 11.

Funerals
Several thousand mourners turned out on Friday to bury those killed in what Bahrain’s top Shi’ite cleric called a “massacre” ordered by the island’s Sunni ruling family to crush protests.

The unrest has presented the United States with a now familiar dilemma, torn between its desire for stability in a longstanding Arab ally and a need to uphold its own principles about the right of people to demonstrate for democratic change.

Revered cleric Sheikh Issa Qassem denounced the police attack on the square and said the authorities had shut the door to dialogue, but stopped short of calling for street protests.

“The massacre was on purpose to kill and to hurt and not to clear any demonstration,” he said.

People interrupted his Friday prayer sermon in the village of Diraz, shouting “The people want the fall of the regime”.

Qassem, an influential but cautious figure who normally shuns politics, disappointed some in the audience of thousands who had hoped he would appeal for protests to be stepped up.

Shi’ites form 70% of Bahraini nationals ruled by the Sunni al-Khalifa dynasty, the US State Department estimates.

Several thousand Shi’ites joined funeral processions in the island village of Sitra, south of Manama, for three of the dead.

Police stayed away, but a helicopter circled overhead. On Tuesday, one protester was killed at the funeral of another.

In a loyalist demonstration in Manama, hundreds of people waving flags and pictures of the king streamed through the streets, local television footage showed.

Inside the Sitra mosque, men washed the body of 22-year-old student Mahmoud Abu Taki, who was peppered with buckshot.

The flag-draped coffins of his son and Ali Mansour Khudeir (58) were driven to the cemetery atop vehicles. Three protesters were buried there and the fourth in Karzakan village.

The Gulf Arab state is a close ally of the US and Saudi Arabia, which see it as a bulwark against Shi’ite Iran.

The US Navy’s Fifth Fleet, which projects US power across the Middle East and Central Asia, is based near Manama.

The unrest in Bahrain, a regional banking hub and a minor oil producer, has shaken foreign confidence in the economy.

The cost of insuring Bahraini sovereign debt against default for five years hit fresh 19-month highs, and the instrument was quoted at 310 basis points, up 49 from Thursday’s close.

Foreign Minister Sheikh Khaled bin Ahmed al-Khalifa said the police had to act against the Pearl Square protest camp to save Bahrain from the “brink of a sectarian abyss”.

But Hassan Radi (64) a lawyer in Sitra, contested that.

“Nobody wants to be sectarian, but the people are forced into it when they are discriminated against. No jobs, no respect, this is obvious,” he said outside the mosque.

“What they are demanding is … a modern state with a real democratic constitution that ensures their rights and equality.”

In 1999 King Hamad bin Isa al-Khalifa enacted a constitution allowing elections for a parliament with some powers, but royals still dominate a cabinet led by the king’s uncle who has been premier for 40 years. Shi’ites feel cut out of decision-making, as well as from jobs in the army and security forces.

Ibrahim Mattar, a lawmaker from Wefaq, whose 17 members resigned from the 40-seat assembly on Thursday, said only 11 people remained missing after the police attack. Wefaq MPs said on Thursday about 60 people were missing.

Saudi Arabia fears unrest spreading to its own Shi’ite community, a minority there but concentrated in the eastern oil-producing area of the world’s biggest crude exporter. — Reuters

Sudan: A chance for the AU to refine support for countries in crisis

Sudan military offers to talk after 60 die in protest crackdown

Sudan braces for strike as protesters pile on pressure