Aristide set to return to Haiti in days 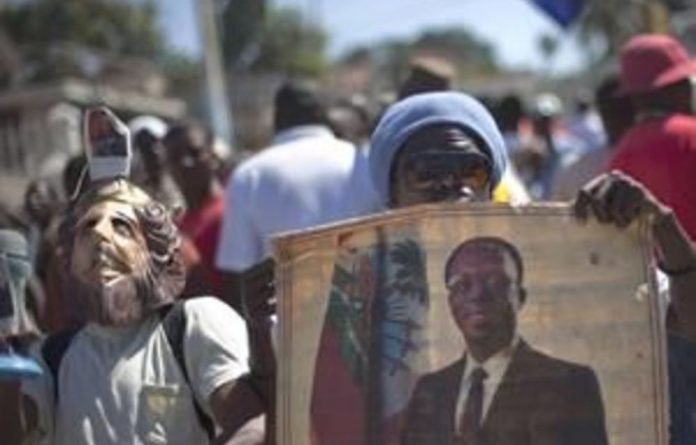 Ousted ex-Haitian president Jean-Bertrand Aristide will return within days to his homeland ending seven years in exile, a South African official said Friday. The former slum priest remains hugely popular and his return could disrupt elections this month in his earthquake-ravaged country.

In Haiti, an official with Aristide’s party confirmed that his “return is imminent”, but declined to say how or when he’s coming back.

“It’s an important event for the people in Haiti because they have waited so long for this,” said Maryse Narcisse, the head of Lavalas’ executive council. “He will not be travelling incognito. People will know he is coming.”

The party was barred from taking part in the vote, and thousands of his supporters vowed last month to disturb the election if he was not allowed to come back. The US has warned his presence “would prove to be an unfortunate distraction to the people of Haiti”.

On Friday, State Department spokesperson Mark Toner told the Associated Press “this is a matter for the government of Haiti”.

“The US remains focused on helping ensure a peaceful and democratic transition of power in Haiti, and that the second round of elections, scheduled for March 20, accurately reflect the will of the Haitian people,” he said.

A South African Foreign Ministry official told the AP that Aristide would return in the coming days. He spoke on condition of anonymity because he is not authorised to make the official announcement.

Aristide’s push to come back from exile follows the stunning return of former dictator Jean-Claude “Baby Doc” Duvalier in January. Aristide has said he wants to help reconstruct the country that was shattered in last year’s massive quake.

Popular voice
Aristide emerged as a leading voice for Haiti’s poor and helped lead a popular revolt that forced an end to the Duvalier family’s 29-year dictatorship. He became the troubled country’s first democratically elected president, despite opposition from the army and Haiti’s elite.

During his exile, Aristide has said many times that he wants to return home as a private citizen and work as an educator.

After Duvalier’s return, it emerged that Haitian officials had ignored Aristide’s request for a passport, preventing his return. That passport, a diplomatic one, was delivered last month in the last days of the administration of President René Préval, Aristide’s one-time protégé.

Duvalier now faces an investigation into allegations of corruption and human rights abuses dating to the dictatorship era.

It is not clear whether charges could be brought against Aristide, whose party was accused of killing opponents and getting rich off drug money in the final year of his government.

It would be the second return from exile for Aristide, who is both loved and reviled. He first was ousted by a military coup in 1991. US president Bill Clinton returned him to power in 1994 following a US military intervention that forced out the military regime. Then, tens of thousands of his supporters gathered around the National Palace to watch US marines fly him in on a helicopter.

Aristide later fled Haiti again on February 29 2004, leaving before dawn on a US plane as rebels approached the capital. He accused American diplomats of having kidnapped him — charges Washington denied.

In South Africa, Aristide has lived a quiet life with his wife Mildred and two daughters in a government-guarded mansion in Pretoria. Along with chauffeured Mercedes Benz limousines, it all was paid for by South African taxpayers.

Aristide was offered a position as researcher at the human sciences faculty while his wife studied at the same university’s Centre for African Renaissance Studies. Neither drew a salary.

Aristide, who speaks several languages, studied isiZulu and wrote a comparative study of Haitian Creole and Zulu called Umoya Wamagama, or The Spirit of the Word. – Sapa-AP