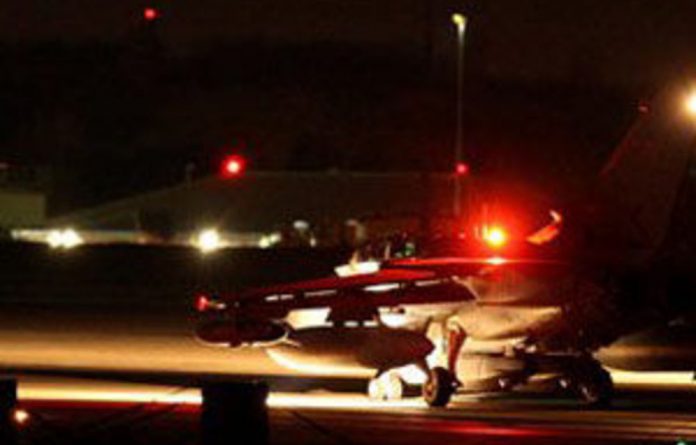 Western forces hit targets along the Libyan coast on Saturday, using strikes from air and sea to force Muammar Gaddafi’s troops to cease fire and end attacks on civilians.

Libyan state television said 48 people had been killed and 150 wounded in the allied air strikes. It also said there had been a fresh wave of strikes on Tripoli early on Sunday.

There was no way to independently verify the claims.

French planes fired the first shots in what is the biggest international military intervention in the Arab world since the 2003 invasion of Iraq, destroying tanks and armoured vehicles in the region of the rebels’ eastern stronghold, Benghazi.

Hours later, US and British warships and submarines launched 110 Tomahawk missiles against air defences around the capital Tripoli and the western city of Misrata, which has been besieged by Gaddafi’s forces, US military officials said.

They said US forces and planes were working with Britain, France, Canada and Italy in operation “Odyssey Dawn”.

“It is now necessary to open the stores and arm all the masses with all types of weapons to defend the independence, unity and honour of Libya,” he said in an audio message broadcast on state television hours after the strikes began.

China and Russia, which abstained in the UN Security Council vote last week endorsing intervention, expressed regret at the military action. China’s Foreign Ministry said it hoped the conflict would not lead to a greater loss of civilian life.

Explosions and heavy anti-aircraft fire rattled Tripoli in the early hours of Sunday. The shooting was followed by defiant shouts of “Allahu Akbar” that echoed around the city centre.

Libyan state television showed footage from an unidentified hospital of what it called victims of the “colonial enemy”. Ten bodies were wrapped up in white and blue bed sheets, and several people were wounded, one of them badly, the television said.

Tripoli residents said they had heard an explosion near the eastern Tajoura district, while in Misrata they said strikes had targeted an airbase used by Gaddafi’s forces.

A Reuters witness in the eastern rebel stronghold of Benghazi reported loud explosions and anti-aircraft fire, but it was unclear which side was shooting.

The intervention, after weeks of diplomatic wrangling, was welcomed in Benghazi with a mix of apprehension and relief.

“We think this will end Gaddafi’s rule. Libyans will never forget France’s stand with them. If it weren’t for them, then Benghazi would have been overrun tonight,” said Iyad Ali (37).

“We salute France, Britain, the United States and the Arab countries for standing with Libya. But we think Gaddafi will take out his anger on civilians. So the West has to hit him hard,” said civil servant Khalid al-Ghurfaly (38).

Gaddafi seen osing grip
The air strikes, launched from a flotilla of about 25 coalition ships, including three US submarines, in the Mediterranean, followed a meeting in Paris of Western and Arab leaders backing the intervention.

French President Nicolas Sarkozy said participants had agreed to use “all necessary means, especially military” to enforce the Security Council resolution calling for an end to attacks on civilians.

“Colonel Gaddafi has made this happen,” British Prime Minister David Cameron told reporters after the meeting. “We cannot allow the slaughter of civilians to continue.”

Some analysts have questioned the strategy for the military intervention, fearing Western forces might be sucked into a long civil war despite a US insistence — repeated on Saturday — that it has no plans to send ground troops into Libya.

Canadian Prime Minister Stephen Harper suggested that outside powers hoped their intervention would be enough to turn the tide against Gaddafi and allow Libyans to force him out.

“It is our belief that if Mr Gaddafi loses the capacity to enforce his will through vastly superior armed forces, he simply will not be able to sustain his grip on the country.”

But analysts have questioned what Western powers will do if the Libyan leader digs in, especially since they do not believe they would be satisfied with a de facto partition which left rebels in the east and Gaddafi running a rump state in the west.

One participant at the Paris meeting said Clinton and others had stressed Libya should not be split in two. And on Friday, Obama specifically called on Gaddafi’s forces to pull back from the western cities of Zawiyah and Misrata as well from the east.

“It’s going to be far less straightforward if Gaddafi starts to move troops into the cities which is what he has been trying to do for the past 24 hours,” said Marko Papic at the Stratfor global intelligence group.

“Once he does that it becomes a little bit more of an urban combat environment and at that point it’s going to be difficult to use air power from 15 000 feet to neutralise that.”

The Libyan government has blamed rebels, who it says belong to al-Qaeda, for breaking a ceasefire it announced on Friday.

In Tripoli, several thousand people gathered at the Bab al-Aziziyah palace, Gaddafi’s compound bombed by US warplanes in 1986, to show their support.

“There are 5 000 tribesmen that are preparing to come here to fight with our leader. They better not try to attack our country,” said farmer Mahmoud el-Mansouri.

“We will open up Libya’s deserts and allow Africans to flood to Europe to blow themselves up as suicide bombers.”

US not leading intervention
France and Britain have taken a lead role in pushing for international intervention in Libya and the United States — after embarking on wars in Afghanistan and Iraq — has been at pains to stress it is supporting, not leading, the operation.

In announcing the missile strikes, which came eight years to the day after the 2003 US-led invasion of Iraq, Obama said the effort was intended to protect the Libyan people.

“Today I authorised the armed forces of the United States to begin a limited action in Libya in support of an international effort to protect Libyan civilians,” Obama told reporters in Brasilia, where he had begun a five-day tour of Latin America.

He said US troops were acting in support of allies, who would lead the enforcement of a no-fly zone to stop Gaddafi’s attacks on rebels. “As I said yesterday, we will not, I repeat, we will not deploy any US troops on the ground,” Obama said.

But despite Washington’s determination to stress its limited role, Vice Admiral Bill Gortney, director of the US military’s Joint Staff, said the strikes were only a first phase.

Earlier on Saturday, hundreds of cars full of refugees fled Benghazi towards the Egyptian border after the city came under a bombardment overnight. One family of 13 women from a grandmother to small children, rested at a roadside hotel.

“I’m here because when the bombing started last night my children were vomiting from fear,” said one of them, a doctor. “All I want to do is get my family to a safe place and then get back to Benghazi to help. My husband is still there.”

Those who remained set up make-shift barricades on main streets, each manned by half a dozen rebels.

In the besieged western city of Misrata, residents said government forces shelled the rebel town again early on Saturday, while water supplies had been cut off for a third day. – Reuters