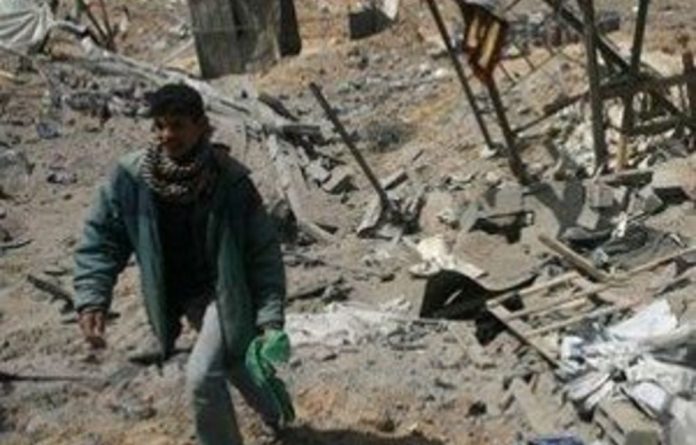 Israel killed four Palestinian militants and wounded half a dozen others as it pursued air raids in Gaza for a third day on Saturday, responding to increased rocket fire out of the territory, local medics said.

Militants in the Gaza Strip, ruled by the Islamist Hamas, continued striking Israel’s south with rockets, wounding five Israelis at around daybreak, according to Israeli media reports.

Israeli forces killed a local Hamas commander in the southern Gaza town of Rafah bordering Egypt, as well as two of his bodyguards, in a targeted strike on a vehicle, medics said. Israel blamed the slain commander for a rocket strike on its port of Eilat launched from Egyptian Sinai some months ago.

Five militants were wounded in a second air raid in northern Gaza. Another air strike at daybreak killed a further militant.

Cross-border violence has surged since Hamas militants fired an anti-tank rocket at an Israeli school bus on Thursday, wounding two people including a teenager, who was listed in critical condition.

Israel has said it wants to teach Hamas a lesson for that attack, which Prime Minister Benjamin Netanyahu said on Friday amounted to “crossing a line”, adding that “whoever tries to attack and murder children puts his life on the line”.

At least 18 Palestinian militants and civilians, including an 11-year-old boy, have been killed in retaliatory strikes on the Gaza Strip since Thursday, and 36 since the latest round of bloodletting began in earnest on March 20.

70 rockets fired at Israel
Gaza militants have fired over 70 rockets and mortars into Israel since Thursday, damaging a house, police said. Israeli media said half a dozen people have been wounded.

About 50 rockets were fired on Friday, and Israel’s “Iron Dome” missile defence system has intercepted seven since then.

Israeli security Cabinet member Gideon Sa’ar said on Saturday that Israel’s raids in Gaza, a tiny coastal territory under blockade by the Jewish state, would go on.

“We will not permit sporadic shootings or the disruption of life” inside Israel,” Sa’ar told Israel Radio. “We will continue to operate, under full consideration, to implement a principle of defending our citizens.”

A Hamas spokesperson told Reuters afterwards that the militants would escalate rocket fire and aim for a broader range of targets unless Israel’s aerial assaults were stopped.

“If the Israeli escalation continues, amid international silence and complicity, the reactions by resistance factions will broaden,” spokesperson Sami Abu Zuhri said.

Fawzi Barhoum, another Hamas spokesperson, urged the Arab League, now focused on unrest elsewhere in the Arab world, to convene urgently on Gaza.

“It is time for them to acknowledge Gaza and put the Palestinian struggle on their agenda,” Barhoum said.

Two years of periodic, low-level skirmishing on the border escalated suddenly last month when Hamas showered rockets on Israel. Hamas had largely withheld fire since a Gaza war in late 2008 in which 1 400 Palestinians and 13 Israelis were killed.

Political analysts in Gaza have explained the latest bloodshed as an effort by Hamas to divert attention from popular demands — fuelled by pro-democracy unrest elsewhere in the Arab world — for an end to a split with its Western-backed Fatah movement rivals, who govern in the West Bank. – Reuters