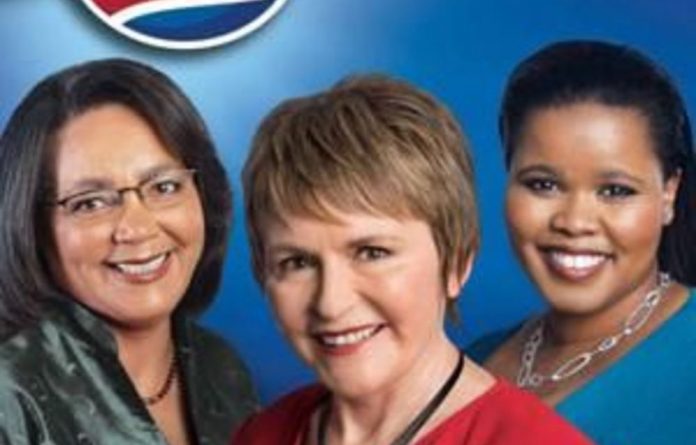 The Democratic Alliance (DA) women-only election posters are dotted around the country in preparation for the local government elections May 18. Is the absence of men alienating, as the M&G‘s Verashni Pillay recently tweeted? City Press editor Ferial Haffajee and Pillay go head-to-head on the issue.

Verashni Pillay: Against
Democratic Alliance posters, they’re hard to miss — and not just because the ANC ones are harder to find than Julius Malema at the Equality Court.

First you’ll see one declaring that our official opposition party “delivers for all”, then you’ll see a choice selection of three DA leaders: a diverse selection of races, but every one of them a woman. Don’t get me wrong. I would love it if we lived in a world — or even a country — where the average voter could look at a poster like that and go: “My my, isn’t that just so enlightened. I too shall be enlightened and trust my political future to a bunch of able women.”

But real life doesn’t follow logic and local voting patterns even less so. The fact is that the grouping of three women on a poster may strike me and other feminists as incredibly liberating, but it’s not going to do anything for the DA’s street cred. There are principles, and there is wishful thinking. Too often the DA are on the wrong end of that continuum. I’ve heard Helen Zille wax lyrical about how “post-race” she is, and I have every reason to believe her, but I want to take her by the shoulders and shout: “The rest of the country isn’t!”

And that’s exactly how I feel about those posters. They’re unnecessarily alienating when one considers how the average voter feels about political leadership: that there should be a man in there somewhere, preferably a black one. It’s just a fact of the inexplicable trends, deep-seated cultural preferences and emotions that rule many people in our country when it comes to making their mark on that ballot.

It’s not like the DA doesn’t have strong men: Athol Trollip is the party’s leader in Parliament and a respected figure. But he messes with the heavy-handed “Charlie’s Angels” image the party has run with for these local government elections. One wonders if Zille is showing a huge middle finger to all her critics who have slammed her previous male-only appointments in Cape Town. I’m sure there are a number of research initiatives the DA could produce to prove voting trends are changing. But I’d bet that this is a blip in the identity-based voting that has ruled every election: it’s about the Big Man, and many people — women included — find safety in that.

Do I like it? Hell, no. But I reckon we need to be a bit cleverer — and pragmatic — about combating it. Or else the DA is likely to be relegated to a footnote in history: a nice idea, but out of touch with reality.

Ferial Haffajee: For
In the election before last, the Democratic Alliance poster was mislabelled as “fart back” — a play on the party’s “fight back” slogan — a conservative campaign with the subtext that the country needed saving from “the blacks” who were, well, ruining it. We. Have. To. Fight Back. The DA was small then, its former leader Tony Leon had a high-pitched voice and so the campaign was pilloried as a fart back — lethal for a short while, but harmless really.

This time around, however, I like the DA’s poster. It features the party’s two strongest calling cards — the political sage Helen Zille and the streetfighter Patricia de Lille. For good measure, the party included its leader of tomorrow, Lindiwe Mazibuko. If you want to read it politically, it’s clear that the party is going for a cross-racial vote, and an inter-generational one at that.

It is trying to appeal across political groupings — Zille is from the democratic movement, De Lille is from the Pan-Africanist movement and Mazibuko symbolises a growing generation of urban, middle-class, young people who have no particular affiliation but who are politically minded and engaged.

The fact that they are all women is, for me, a happy byproduct. If they are trying to get the women vote, this is a good thing. The ANC had us [black women] cornered for a long time and for many reasons but, as the party has become more conservative and patriarchal, there are many women who are looking for a new home.

If you add in the statistics that show women’s consumptive and decision-making power to be significant, it’s not a bad tactic. Each of the women is clearly not an affirmative-action ticket (though there’s nothing wrong if they were — many of us would still be languishing barefoot in the kitchen if it wasn’t for equity policies) and each has come through the DA’s system of merit appointments.

So why, I wonder, is this poster “alienating”, as my peer Verashni Pillay tweeted recently, setting up a stream of comment that broadly sided with her. The poster was “unnecessarily alienating” of whom? I didn’t hear the liberal people, who tweeted along, complaining all the years when the DA marginalised the women and the blacks in its ranks as it trotted out row after tired row of white guys. The challenge for our public life is to jump out of our boxes, either racial or gendered.

The low numbers of women leaders in many spheres, be it business or the media and even in politics, suggest we are not yet comfortable with anything other than the gendered norm. This is alienating for those of us who regard ourselves as feminists. But feminism is a dying form, as my colleague Babalwa Shota suggested recently when she pronounced herself ready to be a second wife. The Sixties, she said, is over, honeys. This is true. It feels like we are back in the Forties when wifey knew her place and it certainly wasn’t on an election poster.

This article was originally published in City Press