Japan’s Kan under pressure after party falters in polls 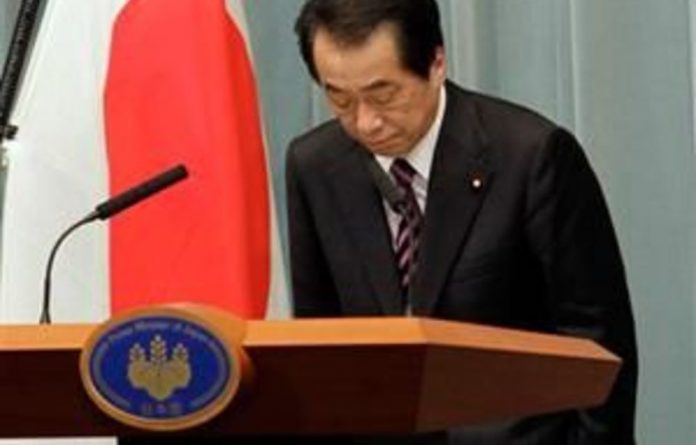 Unpopular Japanese Prime Minister Naoto Kan faces fresh pressure to quit after his ruling party’s losses in local elections on Sunday, weakening his clout as he struggles to contain a nuclear crisis and find ways to finance post-quake rebuilding.

Kan is unlikely to step down easily, but the outcome of the polls will make it harder to get opposition cooperation in figuring out how to fund rebuilding from the March 11 earthquake and tsunami that caused up to $300-billion in damage, a tough task given a public debt twice the $5-trillion economy.

Such cooperation is vital as Kan faces a divided Parliament.

“I don’t think the results of the elections will lead to any quick resolution, but it is true that the opposition parties will feel emboldened to be obstructionist,” said Sophia University professor Koichi Nakano.

Kan’s Democratic Party of Japan (DPJ) lost six out of nine mayoral races in which it faced off directly against its main opposition, the Liberal Democratic Party (LDP). It also lagged behind in a spate of city assembly elections across the country, Japanese media reported, although the LDP itself lost seats.

A candidate from the conservative opposition LDP also romped to victory in a lower house by-election in the former Democratic Party stronghold of Aichi, central Japan, after the ruling party failed even to field a contender.

“The election results show that [voters] have filed a huge complaint against the Kan Cabinet over its handling of the disasters,” LDP president Sadakazu Tanigaki told a late night news conference. “This shows that many voters are worried whether he is really capable.”

Declining clout, continuing deadlock
Kan brushed aside calls for his resignation. “I am absolutely not thinking about abandoning my current responsibilities,” Kan told the upper house budget committee.

Even as he spoke, Japan’s military, aided by the US army, was mobilising 24 800 personnel to look for bodies in areas hit hardest by the disaster that left some 28 000 dead or missing.

Debt-ridden Japan is facing a huge clean up bill following the natural and nuclear disasters, but a senior DPJ lawmaker told Reuters that asking the central bank to directly underwrite reconstruction bonds — something that could further hurt Japan’s fiscal standing — was not an option.

Kan’s critics in his own DPJ were expected to step up their attacks, but the party has no obvious successor in sight.

Media said the LDP could submit a no-confidence motion against Kan in coming months, but more than 70 out of over 300 DPJ lawmakers would have to back the motion for it to pass.

“I am acutely aware of the importance of the party acting together,” Kan replied when a DPJ lawmaker called for uniting the fractious party, including by seeking help from Kan’s bitter rival, party heavyweight and former DPJ leader Ichiro Ozawa.

While Kan’s clout in his party has weakened, his rivals may also lack momentum for a successful campaign to topple him.

“While there are those [in the DPJ] who speak about a no-confidence vote, that would be very difficult,” independent analyst Minoru Morita said.

“Unless Kan makes a fresh gaffe or a Cabinet member quits … it would be hard to move to that stage. So unless Kan resigns on his own, the situation will remain deadlocked.”

Opinion polls have shown that most Japanese want a new prime minister, but many would prefer Kan to stay until the crisis at Tokyo Electric Power Company’s quake-crippled Fukushima Daiichi nuclear plant is resolved. When that will be is uncertain, but it is likely to take many more months at least. – Reuters