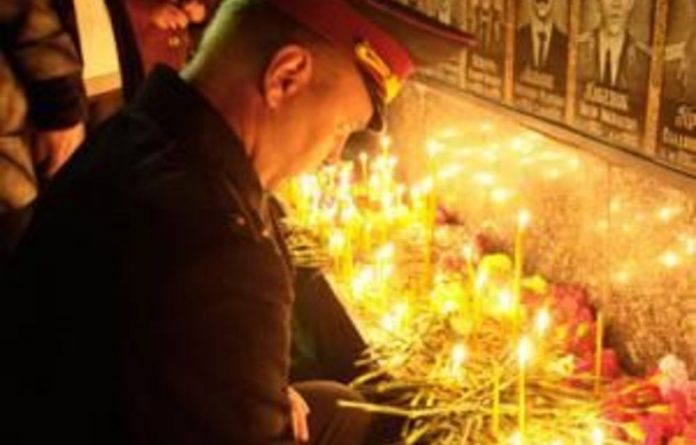 Russian and Ukrainian leaders marked 25 years since the world’s worst nuclear disaster on Tuesday as they paid an historic visit to Chernobyl, dogged by new fears over atomic energy.

Dmitry Medvedev, making the first visit by a Russian president to the now defunct Chernobyl Atomic Power Station, and his Ukrainian counterpart, Viktor Yanukovych, paid tribute to the victims of the 1986 catastrophe.

April 26 2011 marked the 25th anniversary of the Chernobyl nuclear disaster which saw hundreds of thousands of inhabitants evacuated from the worst hit areas in Belarus, Ukraine and Russia. It is considered the worst nuclear accident to have ever occurred.

“We are marking a tragic date. Twenty-five years have passed and we have understood that nuclear accidents have colossal consequences for the population,” said Yanukovych.

“The world has understood that such catastrophes cannot be fought by one country on its own,” he added.

Medvedev, meanwhile, announced he had forwarded to international partners proposals for a new global nuclear safety convention to ensure the disasters of Fukushima and Chernobyl are not repeated.

But he said nuclear power remained an essential energy resource. “No one has offered so far new sources of energy,” Medvedev said.

He praised the sacrifice of the Soviet rescue workers, known as liquidators, who sought to minimise the effects of the disaster despite the risk to their own health.

“The consequences of this accident could have been extreme. They were huge as it is. We must remember this,” he said.

In extraordinary scenes, Yanukovych and Medvedev spoke to dozens of reporters on a brilliant spring day as the birds sung and the disused hulk of the power station loomed in the background.

Successive explosions
Earlier, at a night-time service led by Russian Orthodox Patriarch Kirill in Kiev, a bell struck at 1.23am — the moment when the explosion struck — and tolled 25 times for the years that passed since the disaster.

The disaster happened as workers at the Chernobyl atomic power station in the then-Soviet republic were carrying out a test on reactor four when operating errors and design flaws sparked successive explosions.

Radioactive debris landed around the reactor, creating an apocalyptic scene in the surrounding area, while material also blew into the neighbouring Soviet republics of Belarus and Russia and further into Western Europe.

Two workers were killed by the explosion and 28 other rescuers and staff died of radiation exposure in the next months. Tens of thousands needed to be evacuated and fears remain of the scale of damage to people’s health.

Moscow stayed silent on the Chernobyl disaster for three days, with the official news agency TASS only reporting an accident there on April 28, after the Forsmark nuclear plant in Sweden recorded unusually high radiation.

In 1986 and 1987, the Soviet government sent more than half-a-million rescue workers, known as liquidators, to clear up the power station and decontaminate the surrounding area, but who now complain of shoddy treatment by authorities.

“Initially, I was treated like a hero,” said Russian rescue worker Vladimir Kudriashov, who took part in the rescue effort from September to October 1986 and now suffers from severe heart problems.

“I was given travel and free medicine. But since the law was changed [on the assistance for former liquidators] I have nothing,” he complained.

In Tokyo, Japan Chief Cabinet Secretary Yukio Edano, however, insisted that the two cases were different in nature.”

“Unfortunately the amount of radioactive material leaked was about one-tenth [of Chernobyl], but at least we were able to avoid explosions of the reactors,” he said.

Despite the notoriety of Chernobyl, controversy has raged for years, even between the United Nations’s own agencies, over the number of deaths directly caused by the disaster, with estimates ranging from tens of thousands to just dozens.

Some experts have said the worst health legacy of Chernobyl is mental rather than physical, with those affected traumatised by the memory of April 1986, forced relocation and the sense that they are victims of nuclear catastrophe.

Chernobyl continued producing energy until well after the collapse of the Soviet Union. Reactor number two shut after a fire in 1991, reactor number one closed in 1997 but reactor number three went on working right up until December 2000. — AFP