Will and Kate in biggest royal wedding for 30 years 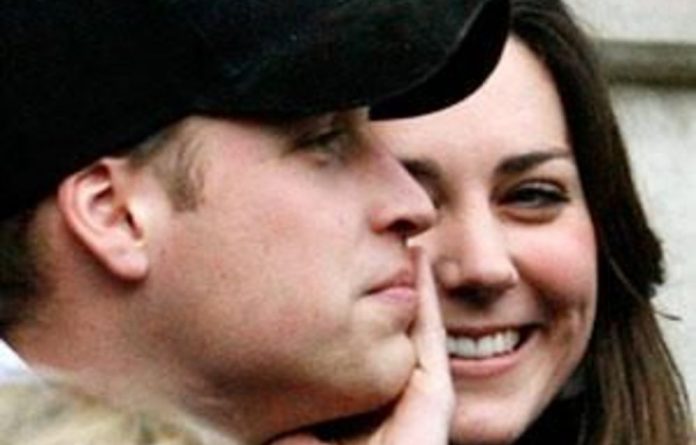 Prince William and Kate Middleton marry on Friday in Britain’s biggest royal wedding for 30 years, watched by more than a million flag-waving spectators in London and two-billion global TV viewers.

The crowds cheered as the doors of Westminster Abbey opened to admit the first of the 1 900 guests for the richest display of royal pageantry since William’s late mother Diana married Prince Charles in 1981.

Buckingham Palace added to the fervour, announcing that William and Kate had been granted the titles Duke and Duchess of Cambridge as a wedding gift by Queen Elizabeth II, William’s grandmother.

The absence of Diana, who died in a car crash in Paris 1997, will be keenly felt throughout the day, and Prince Charles’s main spokesperson Paddy Harverson said she was “always” in William’s thoughts.

“But I think today is about the future and about Catherine and Prince William, and it’s their day and I think you’ll find it will go beautifully,” Harverson told BBC.

A third of the world’s population is expected to watch Diana’s eldest son and the second in line to the throne wed the commoner he began dating at St Andrews university in Scotland eight years ago.

‘Marrying for love’
The skies over Westminster Abbey were cloudy but the weather was dry although rain showers are forecast later in the day.

Thousands of campers had transformed The Mall, the wide boulevard leading to Buckingham Palace, into a sea of Union Jack flags as they prepared to cheer on the newlyweds.

“They will make the monarchy fashionable again. It’s good for the country,” said Louise Akehurst (25) an administrator from London.

Sandra Russell (65) who is of French-British nationality, said she thought the marriage would be successful because Kate is “much older than Diana was at the time, much more mature and they are marrying for love”.

“Charles was under the pressure of his family. People here are still angry at him, and Camilla [his second wife] too. I hope William will be the next king.”

The first guests started arriving at the ancient abbey and will include 50 members of the royal family, dozens of foreign royals and celebrities including footballer David Beckham, singer Elton John and “Mr Bean” actor Rowan Atkinson.

William Arthur Philip Louis, as the prince is officially known, is due to arrive at the abbey at 9.15am GMT, accompanied by his best man and younger brother Prince Harry.

The bridegroom will wear a scarlet military tunic.

Getting the lines right
The first glimpse the world will have of 29-year-old Catherine Elizabeth, and her dress, will be at precisely 9.51am GMT when she emerges from the exclusive hotel where she spent the night and climbs into a Rolls-Royce to head to the abbey.

The service is due to begin at 10.00am GMT, although it is the right of British brides to be several minutes late.

The Order of Service reveals that Kate will not promise to obey her husband in her marriage vows — following in the footsteps of Diana, who married Charles on July 29 1981 at St Paul’s Cathedral.

William received a welcome worthy of a rock star when he made an impromptu appearance on The Mall on Thursday evening before a meal with his brother and best man Prince Harry, their father and his second wife Camilla.

The 28-year-old prince, who works as a Royal Air Force search and rescue pilot, was heard telling well-wishers: “All I’ve got to do is get the lines right”.

Royal celebrations
After the service, the newlyweds will travel in a horse-drawn open carriage from the abbey to Buckingham Palace where the couple will follow tradition by appearing on the balcony with the rest of the royal family and kissing.

Kate’s dress has been a tightly-guarded secret, but a woman thought to be Sarah Burton, the creative director of the fashion house of late British designer Alexander McQueen, was seen entering the Goring Hotel where the bride was staying.

More than 8 500 journalists and technical staff are covering the wedding for a global audience.

And the world will join in the party. New York’s iconic Empire State Building will be illuminated in blue, white and red in honour of the royal couple. — AFP