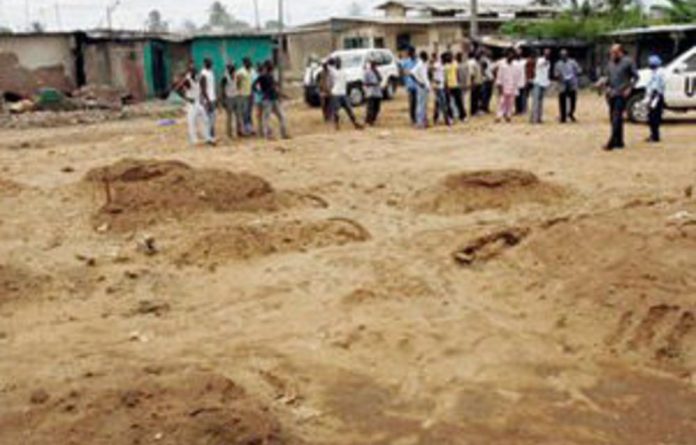 UN investigators in Côte d’Ivoire have determined there were at least 68 bodies spread out across 10 burial mounds in a mass grave recently discovered on a soccer field in Abidjan, the country’s commercial capital.

Guillaume Ngefa, the deputy director of the human rights division of the UN mission in Côte d’Ivoire, said on Monday the victims were probably killed by pro-Laurent Gbagbo militias on April 12, the day after the strongman was arrested.

Ngefa said in a telephone interview that investigators visited the site on Friday and photographed the 10 plots. They interviewed witnesses who described the killings as well as family members who identified the dead.

Ngefa said the investigators spoke to two residents of the Yopougon neighbourhood where the incident occurred who were conscripted by the militiamen and forced to bury the dead.

The killings occurred on April 12, the day after Gbagbo was arrested by the army fighting to install the nation’s democratically elected leader, Alassane Ouattara.

Yopougon, where the soccer field is located, is believed to be where Gbagbo’s militias took cover after their leader’s fall.

Revenge
The area has historically been a Gbagbo stronghold, but it has pockets inhabited by the Djola and Baole, ethnic groups that voted for Ouattara in November’s divisive election. The victims were almost exclusively from these two groups, witnesses told the Associated Press.

Ngefa said the largest grave is believed to hold 31 bodies; another has at least 21.

The killings may have been in revenge for the arrest of several dozen militiamen who had taken cover inside a Baptist Church in Yopougon, said Ngefa.

The militiamen and foreign mercenaries were rounded up by Ouattara’s army. Soon after, pro-Gbago gunmen began going door-to-door in Yopougon, arresting and killing perceived supporters of Ouattara, Ngefa said.

On Monday evening, Ouattara’s defence spokesperson said in a statement that pro-Gbagbo militias and mercenaries had killed at least 120 people as they fled Abidjan toward the border with neighbouring Liberia. Gbagbo was known to have employed Liberian mercenaries in the final months of his rule in a last-ditch effort to cling to power.

“The final combatants fighting in the name of ex-president Laurent Gbagbo were Liberian mercenaries and Ivorian militiamen,” said the statement signed by defence spokesperson Captain Leon Kouakou Alla. “As they fled they practiced, in the departments of Toulepleu, Blolequin, Guiglo and Duekoue, a scorched earth policy — nothing should exist after they had come through,” the statement said.

Gbagbo’s refusal to cede power after losing the November election in Côte d’Ivoire sent the West African nation into a spiral of violence. More than 1 000 civilians were killed, first by the army controlled by Gbagbo and later by a former rebel group allied with Ouattara that seized control of the country and toppled Gbagbo. – Sapa-AP