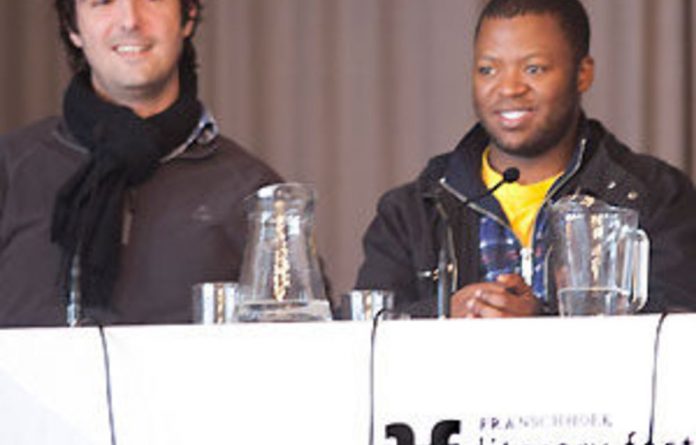 “Is satire to disrespect what corrective rape is to rape?”

The audience member’s question went down like a lead balloon at the end of the session on online satire at the Franschhoek Literary Festival.

The two were on fire throughout the session, one of the first at the festival, which ran from May 13 to 15 in the absurdly beautiful Western Cape village ringed by mountains and spilling over with world-class restaurants.

Published authors picked apart serious works of fiction in other sessions, but “Holy Cow to Beefburgers”, as this session was dubbed, was playful and immediate, responding to issues still blistering in the public mind — such as Sunday World columnist Kuli Roberts’s take on coloureds, which went horribly wrong, or that column by David Bullard in the Sunday Times espousing painfully racist sentiments with too thin a veneer of supposed satire.

Lost in translation?
What the audience member with his jarring comparison to rape seemed to be asking was: Is satire African? Should we mercilessly mock our elected leaders?

But another comment he made during the session revealed satire’s racist hang-ups in South Africa.

“Sometimes I sit here thinking, here I am using a brain essentially manufactured by apartheid to criticise the democratically elected government of a country by the majority.”

Thankfully, Eaton occasionally breaks out of these dark moods to produce the sorts of pieces that made him one of this newspaper’s most popular columnists at one point and saw his subsequent project Hayibo.com produce works of satirical genius.

Farcical
The most-read articles on the site are “Gautrain construction devastating Gauteng Gummi bear communities” and “Vagina a myth, say Saudi scientists”, which got picked up by conservative Americans and read as fact.

Still, the tradition of satire, which stretches as far back as the court jester in medieval times, as Eaton later pointed out, needs to walk a tightrope in South Africa. When venerated political cartoonist Zapiro sketches a cartoon critical of the government, he is immediately accused of racism.

Indeed, the question from the audience, with its overtones of sexual violation, recalls one of Zapiro’s most controversial cartoons — which depicted President Jacob Zuma preparing to rape a woman labelled as Lady Justice while his political allies held her down.

Reactions to the cartoon and its subsequent variations spoke to the heart of satire’s problem in South Africa — a lack of tradition.

Eaton’s influences are English, though he acknowledges the heritage of people such as Pieter Dirk-Uys and Herman Charles Bosman. Dlanga cites American comedian Chris Rock, whose broader comment on society using comedy dovetails with his own brand of engagement.

Satire gone wrong
But more disturbing than a lack of tradition is the risk that satire may be misused by racist and fundamentalist groups. The Saudi piece was used as fuel for anti-Arabic sentiments — to Eaton’s dismay.

Musing on Bullard’s and Roberts’s train-smash columns, Dlanga acknowledged the risk of becoming what one was parodying — in the reader’s eyes — especially if the piece was poorly planned.

“You have to work harder than someone writing an academic paper,” said Dlanga — and under intense deadline pressure.

If you don’t work at it, you risk becoming another columnist casualty in a media landscape littered with those who “went too far” — which is easy to do, given the intense negativity of the most vocal readers of news in South Africa. A columnist has to navigate the reactions of those cheering the downfall of a black government without falling prey to their thinking.

“David [Bullard] may have been getting fan mail from a certain crowd that egged him on,” said Eaton. “You get swept up by your readers’ reactions to things.”

He recalled the same pressure while writing for the Mail & Guardian. “The most popular articles were when I was most abrasive and cynical. And people egged me on, saying, more, more!”

Talk king
Dlanga’s satire, if it can be called that, is nowhere near as harsh. He is a bit like the Oprah Winfrey of Twitter in South Africa, starting discussions that get all kinds of South Africans — not just the white middle-class — talking about issues such as relationships, education and, of course, politics.

He was a newcomer to the festival, sitting alongside published authors. His published work? His blog, “In my arrogant opinion”, first launched on the M&G’s Thought Leader platform after Dlanga, then just another person in the advertising industry, started a video blog that went viral and won awards.

“I was created by people who thought I had something to say,” said Dlanga, half jokingly.

His is an endearing success story — a village boy from the Transkei who lied his way into advertising school and, with hard work and innovation, earned his status as a new kind of media star.

Now he speaks on panels at highbrow literary festivals, even though he has confessed to not being a big reader — an admission that drew the wrath of a fellow up-and-coming opinionista, Oxford-educated Eusebius McKaiser, who wrote a scathing blog post titled, “The unfortunate invention of Khaya Dlanga”, ripping into Dlanga’s social-media-darling status and his lack of intellectual gravitas.

Dlanga, who chose not to respond to the subsequent uproar even when goaded by his thousands of fans on Twitter, said diplomatically at the festival when pushed on the issue by chairperson and author Fiona Snyckers that there was “a space for everyone”, including the likes of McKaiser.

“He should not feel disempowered. What he does is analyse things in an advanced way” — and then his real knack for satire kicked in. “People like me will understand subjects on a basic level. I am Facebook. I am the ANC. I suppose I’m Julius Malema. The masses understand me.”

He was grinning widely by the end of all that and McKaiser’s gripes were forgotten by the audience. And that is part of satire’s healing effect.

Eaton said he had the most success with his pieces when he was having fun, as with the Gummi bear article. “When you start doing ‘Oh Julius’ week after week you start getting bitter,” he said. “Sometimes you’re not a satirist, you’re a stand-up comedian trampling on people’s wounds.”