Fears of civil war in Yemen as dozens die 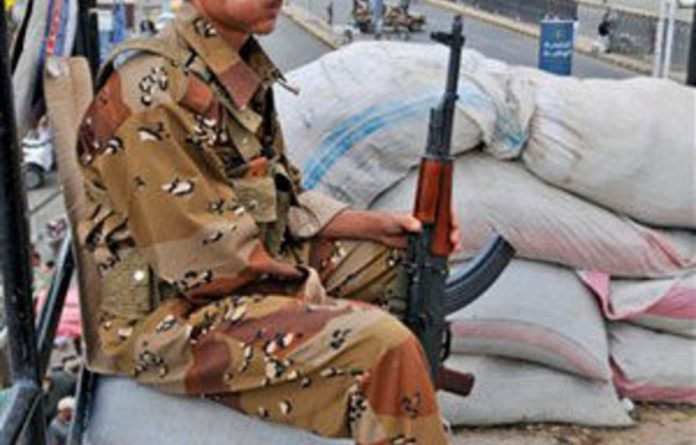 Dozens of Yemenis were killed in overnight gun battles in the capital, a government official said on Thursday, as fighting aimed at toppling President Ali Abdullah Saleh threatened to ignite civil war.

The defence ministry said at least 28 people were killed in an explosion in an arms storage area of Sana’a, and that a Yemeni prosecutor had ordered the arrest of “rebellious” leaders of the tribal group led by the al-Ahmar family.

A government official said the headquarters of an opposition television station had been “destroyed”, without giving details.

Residents were fleeing Sana’a by the hundreds, hurriedly fastening possessions to the roofs of cars, hoping to escape the violence that has killed more than 40 people since Monday and threatened to spread into other areas of the capital, Sana’a.

The most recent clashes have been concentrated in a part of northern Sana’a where fighters loyal to powerful tribal leader Sadiq al-Ahmar have been trying to take over government buildings including the Interior Ministry.

Witnesses told Reuters that al-Ahmar’s mansion was severely damaged, and explosions around midnight on Wednesday could be heard in wide parts of the city.

“This seems to be heavier weapons than the machine guns and the mortars of the past few days,” one resident said.

The government official did not provide details on from which sides the dead and wounded came from the overnight fighting. Each side blamed the other for the violence, which the opposition said could spiral into a civil war.

The United States and Saudi Arabia, both targets of foiled attacks by a wing of al-Qaeda based in Yemen, have tried to defuse the crisis and avert any spread of anarchy that could give the global militant network more room to operate.

There are worries that Yemen, already teetering on the brink of financial ruin, could descend into a failed state that poses a major risk for regional security and its neighbour Saudi Arabia, the world’s biggest oil exporter.

The US ordered all non-essential diplomats and embassy family members to leave the country.

“The security threat level in Yemen is extremely high due to terrorist activities and civil unrest. There is ongoing civil unrest throughout the country and large-scale protests in major cities,” the State Department said.

The most recent round of fighting erupted a day after Saleh, who has ruled the country to 33 years, pulled out for the third time from a deal mediated by Gulf Arab neighbours for him to step down and make way for a national unity government.

Pressure has been mounting since February, when protesters inspired by democratic revolutions in Tunisia and Egypt began camping in squares and marching in their hundreds of thousands to call for Saleh to go. His attempts to stop the protests by force have resulted in hundreds of deaths.

US President Barack Obama has called for Saleh to sign the deal but analysts said Washington has little leverage in Yemen even though it has sent about $300-million in aid to help prop up Saleh’s government.

“What options do we have to force a resolution? Almost zero,” Barbara Bodine, a former US ambassador to Yemen, told Reuters.

City at war
Saleh said on Wednesday he would make no more concessions to those seeking his departure. But the capital of the country of 23-million has begun to feel like a city at war.

Fighters in civilian clothes roamed some districts on Wednesday and machine-gun fire rang out sporadically.

Electricity was intermittent and Sana’a’s airport was temporarily closed. Many city centre streets were deserted in the afternoon, but for government checkpoints.

The area around the Ahmar compound resembled a ghost town after the dust settled from the latest firefight.

Long lines of cars snaked out of the city, bags piled high on their roofs, even as gunmen blocked entrances to prevent tribesmen from bringing in reinforcements, witnesses said.

“It’s no longer possible to stay in Sana’a. The confrontations will reach all parts of the city,” said Murad Abdullah as he left by car.

Witnesses and officials said supporters of al-Ahmar, head of the Hashed tribal federation to which Saleh’s Sanhan tribe also belongs, controlled several ministry buildings near al-Ahmar’s compound including the trade and tourism ministries, as well as the offices of the state news agency Saba.

Televised images of al-Ahmar’s own compound showed tribesmen rushing through opulent but dusty halls, their floors spattered with blood, as they helped colleagues wounded in the fighting.

Saleh told a group of invited reporters including a Reuters correspondent on Wednesday that his government was “steadfast”.

‘Thirsty for bloodshed’
General Ali al-Mohsen, a regional army commander who has sided with protesters, called on the armed forces to defy the president. “Beware of following this madman who is thirsty for more bloodshed,” he said.

Shadi Hamid, analyst at the Brookings Doha Centre, said: “I think there’s a real risk that violence can escalate, and we see a move towards low-intensity civil war.”

Saleh said the deal remained on the table, despite his repeated failure to sign. “I am ready to sign within a national dialogue and a clear mechanism. If the mechanism is sound, we will sign the transition of power deal and we will give up power … No more concessions after today,” he said.

UN Secretary General Ban Ki-moon’s spokesperson, Martin Nesirky, said Ban was deeply troubled by the clashes in Sana’a and called for further peace efforts and an immediate end to the fighting, while Britain reiterated calls on Saleh to sign the exit deal. — Reuters