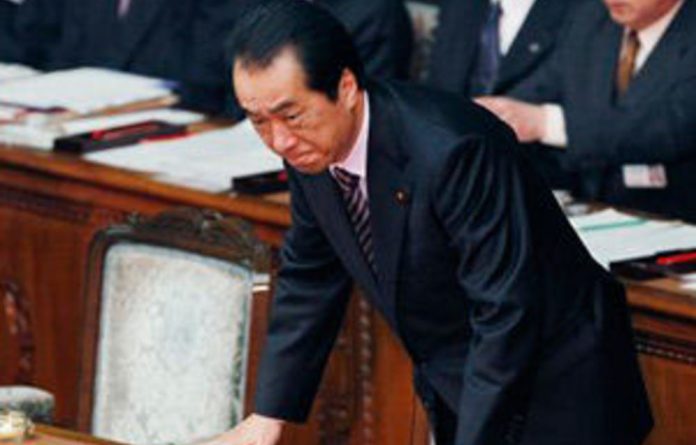 Japan’s Prime Minister Naoto Kan, struggling with the nation’s tsunami and nuclear disasters, on Thursday faced a no-confidence motion backed by rebels in his own party that left his future on a knife-edge.

Naoto Kan, in power just under a year, is Japan’s fifth premier in as many years, and his ouster would perpetuate its revolving-door leadership even as it struggles with its worst post-war crisis, a flagging economy and high debt.

Kan’s enemies face a tough battle, but observers saw the contest as too close to call as frantic lobbying and bullying of lawmakers continued ahead of the 4am GMT debate, with vote results expected about two hours later.

The opposition conservative Liberal Democratic Party (LDP), which was ousted in 2009 after over half a century of almost unbroken rule, submitted the no-confidence motion late Wednesday, backed by a smaller coalition partner.

Its leaders have angrily accused Kan of bungling the recovery from the March quake-tsunami disaster that has left more than 23 000 people dead and missing and triggered the world’s worst nuclear crisis since Chernobyl in 1986.

Kan’s centre-left Democratic Party of Japan (DPJ) has a majority in the 480-seat Diet lower house, but he could still lose the vote because a powerful rival and faction boss, Ichiro Ozawa, has said he would vote against Kan.

In order to push through the no-confidence motion by a majority vote — which would force Kan to either step down or call fresh elections — the LDP would need the backing of more than 80 DPJ rebel lawmakers.

The ruling party has fought hard to win over smaller groupings and maintain internal party discipline, threatening lawmakers hostile to Kan with expulsion if they vote against the premier and party leader or abstain.

The rebellion’s scandal-tainted leader, one-time LDP heavyweight Ozawa, has earned the nickname of “the destroyer” over his four-decade political carrier for his record of forging and tearing down alliances.

Ozawa last year narrowly lost a leadership challenge against Kan, and a shadow hangs over his future after his indictment over political funding irregularities, in which he denies any wrongdoing.

The political infighting at a time of crisis has disgusted many Japanese.

The Asahi Shimbun daily said in an editorial that the Diet’s duty is to make laws and a budget to speed disaster recovery and said “we feel strong resentment at the lawmakers who are brazenly playing power games”.

Most newspapers shied away from predicting who would win the battle, except for the conservative Sankei Shimbun, which charged in an editorial that the “irresponsible actions of Prime Minister Kan are widening the human disaster”.

“While it can be argued that it’s wrong to carry out a political fight at a time when we are recovering from the East Japan Great Earthquake, the political vacuum created by the prime minister’s bungles is more problematic.”

Among smaller parties, the Buddhist-backed New Komeito and conservative Sunrise parties jointly submitted the no-confidence motion with the LDP.

The Social Democrat and Communist parties were expected to abstain, while the People’s New Party and some independents may back Kan.

Ozawa on Wednesday night held a meeting of 70 lawmakers, many of whom were expected to vote against Kan. Former premier Yukio Hatoyama, who lasted in office less than nine months, also opposed Kan.

Jiji Press news agency said he denied plans to leave the party if the vote fails to form a new grouping, as some political observers suspect he may do, insisting instead that “we are the true DPJ lawmakers”.

Asked if Kan had any plans of stepping down, Edano said: “Currently our prime minister has no intention of running away from the big responsibility of dealing with the disaster and the nuclear accident.” – AFP