Going to the blogs 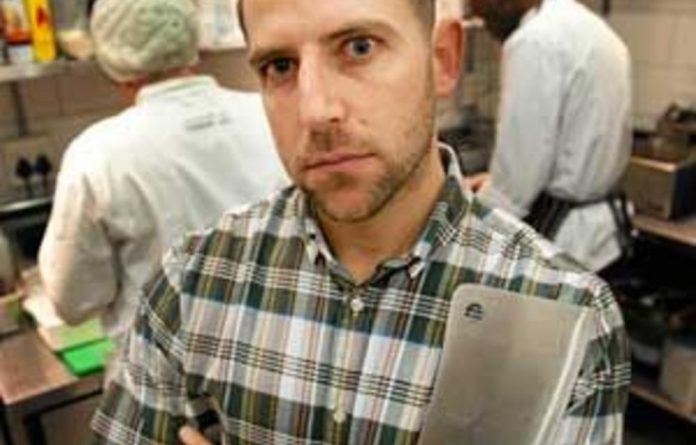 Out of the kitchen came a feast fit for a gourmand: a slow-baked, port-soaked lamb shank with potato purée, warm miso-cured salmon and an amusing deconstructed peppermint-crisp dessert — a mint fondant with tempered chocolate.

When Reuben Riffel launched the winter menu at his eponymous restaurant, old and new media rubbed shoulders at the imposing One&Only in Cape Town to dig into some of the best South Africa has to offer. The food media — House & Leisure‘s Naomi Larkin, Marie Claire‘s Aspasia Karras and Food & Home Entertaining‘s Rosanne Buchanan, along with food writers Kim Maxwell and Vicky Sleet — shared plates with more than a handful of local bloggers.

But, despite the civil conversations over Riffel’s innovations, it was an uneasy pairing.

“I truly resent being lumped in with them,” sneered a food editor not long after the event. “They are treated like the media but they have absolutely no ethics. Why are we giving voice to these freebie-mongers who cause such damage?”

Bitter tension between established food writers and the new food media is hardly novel and far from a local phenomenon. One of the first salvos was fired in March 2006 in the United States when Food & Wine magazine contributing editor Pete Wells penned a column, “In the Belly of the Blog”, in which he snickered: “Today, eating a cheese sandwich qualifies as a hot scoop for legions of bloggers.”

No appetite for the medium
One of the most recent attacks involved British food luminary AA Gill. “I don’t read them,” he told a reporter last month, displaying as much of an appetite for blogs as he would for bowl of cold, sodden cabbage. “I would never read them. As if I have the time.”

Gill, who reviews restaurants for the London Sunday Times and Vanity Fair, thinks they are nothing more than vulgar freebie merchants. “Of course, they’re getting paid,” he told the Down Under.

The industry has always been a snobbish domain and food elitism is older than the Apicius, the fourth-century Roman cookbook. The pleasure of eating has always been characterised by class distinction. Meat has often meant privilege; grains are peasant staples. Now the privileged are on a quest for organic, grass-fed chicken, the ability to boast that you once ate at El Bulli or no-bake cheesecake made purely from avocado and coconut.

The culinary aristocracy
Ever since Julia Child brought French cooking to the American masses, it has been a slow race to the democratisation of food. Books authored by chefs, recipe tomes and magazines transformed the aristocratic gourmet world. Cable television fuelled the next tide, with a slew of chefs pooh-poohing the elitism that seeded gastronomy.

By turning his back on the likes of Paul Bocuse, Jamie Oliver went from being a sous-chef to the giddy heights of global stardom, which saw him enter the London Sunday Times Rich List with a personal fortune of more than R700-million.

But when food finally met the ubiquitous leveller of the internet, things began to fall apart. Instant publishing and social networks dealt the industry a cruel, culling blow. Declining ad revenues for print has had a disastrous effect on gastronomic bibles. Gourmet magazine, despite its million monthly subscriber roll and 70 years in the business, was shut down in late 2009 by Condé Nast. It was, it seems, an idea past its prime.

Gourmet brought epicure to the people — but only some people. Bloggers took it to everyone else, robbing food elitism of its elitism.

Perhaps it’s what bloggers write that’s so difficult to digest.

The hoi polloi
“I have quite literally never tasted anything as good as the Persian love cake. I can see why it so aptly named — I wanted to do more than just love it. As Josh Groban profoundly stated, It raised me up so I could stand on mountains,” wrote one blogger in homage to Mark Springhorn, the head chef on Warwick’s wine estate.

To publish, bloggers only need a free meal, a computer and the will to write. Journalists have to contend with crabby editors, deadlines, ethics, research, a declining market and, until they become an AA Gill, miserable pay. Small wonder they’re annoyed at having to rub shoulders with bloggers at elite restaurant openings.

“We don’t mind food bloggers posting comments on food or publishing online recipes as there is a place for this in the digital era,” says Buchanan.

“But it is their sudden and authoritative voice, which is too often vindictive or ingratiating, that has become an issue. Although I think everyone is entitled to an opinion, it is integrity and professionalism that is at stake.”

It’s not just food writing that has been inundated by the blogosphere. Professional journalists have been complaining for years about the erosion of the industry — the corporate media, which pays their salaries, has been under increasing financial pressure, often shrinking their increasingly junior newsrooms.

Buchanan questions bloggers’ understanding of the food industry. Her magazine has been around for 20 years and has built up trust through discerning selection and quality. She feels bloggers seldom have the same insight or refinement.

JP Rossouw of Rossouw’s Restaurants, a local, independent restaurant guide since 2004, thinks that food blogging is passé. Rossouw, former editor of Condé Nast’s Food and Wine and wine columnist for the Cape Times, used to blog when he started his guide. But after nine years, he abandoned it.

“I felt the ethics that bloggers were following were dubious,” he says. “Bloggers love going to launches, restaurant openings and having free luxury experiences but, unlike experienced food journalists, who understand the industry, do significant research and are modulated by ethics and experience, blogging becomes much like ambulance-chasing.”

Ethical questions
But the established media’s dirty little secret doesn’t help things. Journalistic ethics require disclosure when you get anything from a free airplane ticket to a foot rub from a source you are writing about. But over the years, those strict ethics — especially in leisure journalism — have ebbed away, leaving plenty of room to question their holier-than-thou ethical arguments.

And although bloggers anger established media professionals, PR agencies adore them. The instant feedback of a dozen tweets or a blog that can be “liked” on Facebook is easily quantifiable.

“It is relatively new territory for us and the huge growth in food bloggers in the Cape has had a significant influence on our business,” says Ian Manley, who managed the media event at Reuben’s. “Nowadays when we do events as many as a third of the media represented are bloggers.”

Manley, who runs a PR consultancy that manages luxury leisure brands and restaurants such as Salt, Makaron, Dash and (Trevor Manuel’s favourite) Terroir, might have to wait for up to three or four months to show his clients the results of publicity in food magazines.

But, he says, managing bloggers can cause headaches. Some have offended top magazine editors and can’t be invited to the same events. Two Cape Town bloggers refuse to sit down in the same room. And at the Reuben’s event, one blogger refused to eat because the food was being passed around chef’s table style and not served up in individual portions.

Then there’s that trifle called the truth.

“I am the only person that will not publish a story if it is not true. I check my facts and know that sources are important,” says Clare Mack, a former BBC journalist who runs a site called Spill.

Mack says blogging has become “dangerous” because people let it go to their heads. “There are people who think they are famous and you see how they behave and you can just cringe. I cannot believe that someone who has no background in food and who has a handful of followers is now equal to someone who knows their food, has broken stories and is aware of the industry.”

A bunfight
Mack says the blogging scene in Cape Town has become a “bunfight”. “That is where it is at and there’s no going back because the internet is here and it is not going away.”

But nobody knows where the whole thing is going. Most marketers have yet to get their heads around Facebook or Twitter, never mind successfully engaging or measuring the influence of bloggers.

“Everyone’s enamoured by the sexiness of new media but blogs don’t have much real economic influence. Yes, they are playful and fun, but the mistake we make is to attach too much importance to what essentially is candyfloss,” says Rossouw.

But some do rise above the sticky sweetness.

Andy Fenner is a former property developer who wrote under the pseudonym “Jamie Who” for two years until he transformed a part-time diversion into a full-time business. Fenner now has a monthly online audience of 10?000 people and about 3?000 follow him on Twitter.

“Food blogging has been the most incredible platform for me to expand into new business areas,” he says. Fenner is now a trend forecaster for Woolworths and writes regularly for the company’s Taste magazine.

He says the bad blood between bloggers is often driven by the perceived need to break news.

“There is definitely conflict with online media because certain bloggers see themselves as ‘Erin Brockovich’ types who want to be first with the scoop. There is this constant battle about who breaks the story first, and it can get catty and malicious.”

There is also a notorious blogger on the Cape scene who has been barred from some restaurants and thrown out of others and whose allegedly libellous crusade is said to have caused significant damage to the luxury leisure industry.

Dedication to a craft
Mack pointedly said she would disallow her interview if the blogger’s name appeared in this piece, or if an interview with the blogger was included in this article.

Some bloggers drive traffic by being sensational, others by breaking stories, but Fenner’s career has grown because of his dedication to craft.

“Andy is a very good writer and it is the good writers who get the breaks in real media. Those who write fluff and are undifferentiated may have a moment of fame but that will be it,” says Sumien Brink, editor of Taste magazine.

In an ocean of quantity, only the few, the differentiated and the excellent will eventually rise to the top.