Sting in the fairy tale 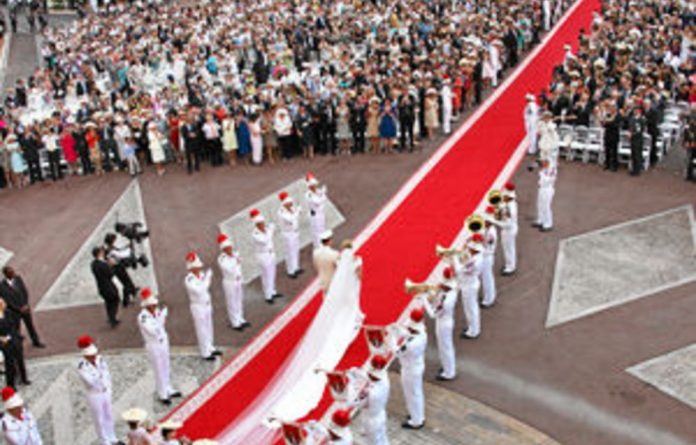 Was I the only one whose sense of sisterhood and national pride took a battering while observing the run-up to and the circus that was Charlene Wittstock’s wedding?

When the engagement of our Olympic champion swimmer to Monaco’s Prince Albert was announced I was enormously excited — not only for her as a woman but also as a fellow South African.

So I, like many fellow South Africans, was watching with keen interest the nuptials and celebrations, where I was sure the flag would fly high and we would witness another feel-good moment for Team SA.

The flag certainly did fly high in the streets of Monte Carlo, and in Durban’s Umhlanga Rocks for the local leg of the festivities, but her spirits certainly did not. This dampened every girl’s fairy-tale fantasy.

The slim as a whippet bride looked ravishing in an Armani gown and the setting of the beautiful Mediterranean couldn’t have been more romantic, but all around her were swirling terrible reports that she had tried to flee from her gilded cage — not once but three times. The French and British tabloids had a field day with suggestions that she had tried to return to South Africa to escape from her prospective husband’s alleged philandering ways, but was stopped at the airport in Nice by the intrepid gendarmes.

With each new and more salacious titbit I recoiled in shame on her behalf and ours. Why did “our” royal wedding have to be so mired in controversy? It simply wasn’t fair after the Brits pulled off theirs with military precision and all the expected splendour and romance.

And I couldn’t help thinking that the British press took particular pleasure in making comparisons between what was soon becoming our circus with the earlier wedding of the Duke and Duchess of Cambridge, further wounding our pride.

The rumours about the ageing prince of Monaco suggested he had fathered a child while seeing Charlene. This would bring to three the number of his offspring born out of wedlock. The other two are really no business of ours, but this latest baba would mean that the dashing prince had once again been up to his caddish ways while dating Charlene, who has been living in Monaco for the past five years. The head spins at this awful possibility but, for it to emerge in the press just a week before you take your vows, that’s just deathly.

The brave woman went through with it in the end, despite the smutty reports. For her valour she deserved one of the epaulettes worn by her awkward-looking prince on the wedding day.

Watching the actual event brought on yet more anxiety. It was tantamount to seeing an action thriller, with all the intrigue and suspense such movies provide. Her behaviour and demeanour did little to dissuade us from believing the reports. Despite her elegant designer gown she looked petrified. At times it seemed as though she was eyeing the nearest exit and would bolt at any moment during the lengthy service.

Even the many well-heeled guests looked nervous. Some looked as if they might faint from the tension and heat. As for Prince Albert, his attempt to look relaxed, and to reassure his bride by winking at her throughout the ceremony, merely served to make him look sleazy and decrepit.

I’m sure this is not how Princess Charlene had imagined her big day. When she burst into tears, in one fell swoop she dispelled any notion among the viewing public that she was a happy bride. With that, she also exposed the “happily ever after” myth.

I switched off my television and began to interrogate our unhealthy obsession with the fairy-tale romance and the “happily ever after” myth. We were equally taken up with the wedding of Princess Di and Prince Charles, but Di looked sweet, and even slightly bewildered, on her wedding day. She didn’t look deeply unhappy as Charlene did. Her misery came later on.

It’s clearly time to put the princess myth in perspective and throw in large doses of reality. We owe it to countless girls around the world to tell them that sometimes the frog is, well, just a frog — even if he speaks French.

If you’ve been put under a spell and are told that only a kiss from a handsome prince will wake you from your eternal slumber, it’s not true. Your girlfriends should just dial 10111.

We need you at home, Madam Minister