Cosatu’s top leaders slug it out 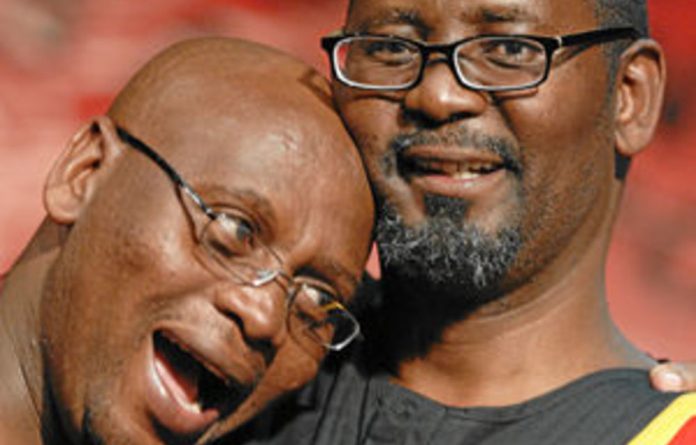 Relations between Cosatu general secretary Zwelinzima Vavi and its president, Sdumo Dlamini, have deteriorated so much that the trade union federation set up a high-level committee of veteran unionists to address the issues.

At the centre of the disagreements between the two is whether to support ANC president Jacob Zuma for re-election at the ANC’s elective conference next year in Mangaung.

The ANC’s succession debate is expected to be top of the agenda when Cosatu leaders meet next week to discuss key policy issues that were postponed during the federation’s recent central committee meeting because differing lobby groups could not agree on them.

The Mail & Guardian spoke to the leaders of four Cosatu affiliates who confirmed the tensions between Vavi and Dlamini. On the one side are those who want Zuma removed — Vavi and his supporters within Cosatu, who include Irvin Jim, the general secretary of the metalworkers’ union, Numsa.

Although Vavi has been highly critical of Zuma and his Cabinet during the past year, Dlamini has been only moderately so.

One of the flashpoints is the government’s new growth path. Vavi insists Cosatu should reject this economic policy, arguing that it resembles former president Thabo Mbeki’s Gear, the controversial growth, employment and redistribution strategy.

But Dlamini believes the government’s new policy initiative is a step in the right direction.

The M&G understands Vavi first confronted Dlamini at a meeting of Cosatu’s top six officials earlier this year and accused him of deviating from Cosatu’s policy positions. This apparently infuriated Dlamini, who hit back at Vavi at the same meeting and accused him of driving an agenda to tarnish the names of Zuma and other senior ANC and government leaders.

Those heated exchanges, Cosatu sources said, prompted the appointment of the high-level committee a month ago to investigate the differences between them.

But, according to the sources, Vavi and his supporters tried to hijack the process and wanted the committee to become in effect a commission of inquiry that would investigate Dlamini for taking different policy positions, particularly on the new growth path.

The outcome of this committee’s deliberations is not known.

This is not the first time Cosatu has been forced to establish a committee to deal with leadership squabbles in its ranks. In 2006 mediators led by veteran industrial sociologist Eddie Webster were called in to settle a conflict between Vavi and former Cosatu president Willie Madisha. At the time, Madisha complained he was often sidelined by Vavi on vital issues, such as the federation’s political positions and the ANC succession battle, which involved former party president Thabo Mbeki and then-deputy president Zuma.

Vavi, who supported Zuma to replace Mbeki at the time, was backed by South African Communist Party general secretary Blade Nzimande. Both Vavi and Nzimande accused Madisha of being too close to Mbeki and his government.

Four years on, Vavi and Nzimande are pulling in different directions. Nzimande has joined Dlamini and other leaders in Cosatu who support Zuma’s re-election as ANC president.

In 2006 Vavi enjoyed overwhelming support in both the SACP and Cosatu in his bid to remove both Madisha and Mbeki. But this time round the Cosatu boss has to deal with major Cosatu affiliates, such as the NUM, Nehawu and teachers’ union Sadtu, which are prepared to fight against his way of dealing with political opponents.

Next week’s meeting of affiliate leaders might be decisive. It is expected that Cosatu leaders will use the outstanding policy issues, which include the national democratic revolution (NDR) and the new growth path, as proxies in the war between those who want Cosatu to support Zuma and those who want him removed.

The Vavi supporters are expected to push for Cosatu to reject the new growth path and pronounce that the NDR is not on track. The strategy would be to portray the Zuma administration as a failure.

“The intention [on the part of Vavi supporters] is to claw back what was lost in commissions. They [the Vavi supporters] lost [there] because delegates said the NDR was on track and that the new growth path was a step in the right direction,” said one Cosatu leader.

Baleni said he did not expect next week’s meeting to change the resolutions taken by Cosatu delegates at the central committee meeting.

“We [NUM] would not be part of attempts [by the Vavi group] to reinvent the wheel of what was agreed upon in commissions during the central committee,” said Baleni.

‘Pursuing a factional agenda’
This is the text of the response Cosatu spokesperson Patrick Craven asked the M&G to run in full in the name of the federation’s “national office bearers” (which include Zwelinzima Vavi and Sdumo Dlamini):

“1. The person who approached Matuma Letsoalo to leak and twist information on organisational issues being managed by the federation is an ill-disciplined factionalist pursuing a factional agenda.
2. There is no truth to the statement that there are tensions between the Cosatu president and general secretary. This false statement is being made to create an impression that the federation is at war with itself in order to feed the media-driven frenzy of a looming succession war in all alliance structures in 2012.
3. Cosatu is refusing to divulge details of the internal discussions to deal with organisational challenges it may face from time to time. We won’t play to the hand of an ill-disciplined leader or member pursuing a factional agenda.
4. It is not true that the Cosatu general secretary is leading any group wanting to push the Cosatu president out of the federation. It is not true that is there is a grouping working on removing the ANC president next year.

Cosatu’s position has been articulated over and over again, including by the general secretary, that it would be divisive to open a succession debate when the ANC congress is 18 months away and the Cosatu congress 14 months away.”