How wartime romance gave birth to the world’s best restaurant 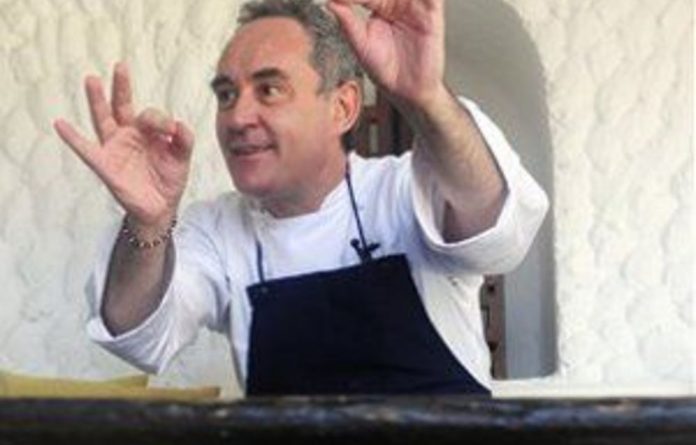 Glasses were raised in a quiet Catalan cove on Friday night to the end of an extraordinary era in culinary history. To the sound of waves lapping on the shore and the relentless chirruping of cicadas, the world-famous El Bulli restaurant of Spanish chef Ferran Adrià closed its doors. A decade of gastronomic revolution drew to its close, as Adrià (49) now turns his attention to building up “the foundation of avant-garde gastronomy, without the distraction of customers”.

El Bulli has been a remarkable story of creative success. For 21 years, Adrià has experimented and beguiled, winning one accolade after another. But El Bulli’s tale is a lot more than the story of Adrià — the lad from a working-class Catalan suburb who became famous for, among other strange experiments, blowing up tomatoes with bicycle pumps.

This final year’s signed menu features a photograph of a German doctor and a young Czech woman. It was their desperate romance amid the rubble of World War II that was to lead to the establishment of El Bulli. Dr Hans Schilling and his wife, Marketta, are dead now and in their final years lived largely separate lives. But both would have been pleased to see what became of the plot of land where they first built a mini golf course and a rough chiringuito beach bar by the Mediterranean.

They had met in Berlin and had a brief but intense romance during the war. As the German army retreated, Schilling was captured by the Red Army. He avoided being sent to a camp in Russia only after Marketta smuggled civilian clothes to him and he escaped. Horst Lehwald, a friend of the couple, said he told Schilling he should marry Marketta if only out of thanks for saving his life.

The couple discovered northern Catalonia in the early 1950s, before package tourism reached the Costa Brava. British travel writer Norman Lewis would have been somewhere nearby, arriving in his large Buick each summer to research his study of a Catalan fishing village, Voices of The Old Sea. Lehwald explained: “I lent them money so they could buy a piece of land that they had not even seen. It only cost 10 000 marks for a plot that overlooked the sea where they could build a house.”

The Cap de Creus was not yet a protected national park, and a handful of houses and a small holiday camp were built in Cala Montjoi. Initially, there was neither running water nor electricity. The bar was a way of giving Marketta something to do in the summer home where she settled. It was named after her bulldogs, and known variously as the Bulli-bar and Hacienda El Bulli.

By 1963 it was advertising itself as providing a “grill room, bar, petit golf and apartamentos”, accompanied by a cheesy tourist map of the Costa Brava. It was the gourmet Hans, however, whose passion for food drove the project on. He invested money, hired French chefs — gaining a first Michelin star — and never saw a peseta in return.

Economic futility
In that respect, El Bulli has not changed. Adrià also lost money on it — it had only 15 tables, and opened for just one sitting a day, six months a year — though the restaurant has helped build a brand name that makes him money elsewhere. By closing it he is both recognising its economic futility and turning it into something potentially more fitting to his mission as a foundation for research that will stretch the frontiers of experimental cooking, but without the pressure of having to feed guests.

Marketta remained passionately in love with her husband until his death, though he had long since gone to live in Germany where he had another partner. “In my mind and heart I have never been separated. It was painful, but I had to get on with life,” she said before her death in 2007. She was left to oversee the restaurant, eventually signing manager Juli Soler in 1981, who, in turn, formed a dynamic duo with young chef Adrià.

The menu testifies that Adrià has not forgotten the El Bulli founders. The young Schillings are pictured beside an old cart bearing the Bulli-Bar logo, as well as the bulldog face that became the restaurant’s emblem.

Adrià’s connection with El Bulli was forged when he worked as a chef while doing military service in the navy. There he cooked for the admiral and met a fellow chef who told him about the restaurant and suggested he went to work there for a summer. At the time he was unaware of what a Michelin star was, though he would later gain three, as well as winning the S.Pellegrino world’s best restaurant award five times in a decade.

‘Why?’
What started off as a summer job, complete with many all-nighters in the tourist discotheques of nearby Roses, soon became an intense and abiding passion. Adrià once said he did not discover his mouth till he was 20. Then, child-like, he could not stop asking “why?”

Adrià went on to become the leading light of a school — the El Bulli kitchens — which has now produced dozens of top chefs. This is where, every year, the world’s keenest young chefs have come to stand for hours over long stainless steel tops podding peas, fiddling with strange foodstuffs and helping in the minutely detailed preparations of the 44 dishes served to each of the 50 privileged customers every night. These stagiaires do up to six months work for nothing more than a bed and a lunchtime meal that costs Adrià exactly €3 a head. Some can afford to eat no more than that.

El Bulli alumni
Yet it is here that the world’s gastronomic revolution has taken place — and most are delighted to have taken part. The El Bulli alumni have gone on to conquer the world. Last year half a dozen of the chefs at the helm of kitchens listed in the world’s 50 best restaurant awards had spent time there.

Stefano Baiocco, now at the Grand Hotel a Villa Feltrinelli in Gargnano, Italy, recalls an atmosphere of intense perfectionism and hard work when he passed through the kitchen in 2003 — just as Adrià was inventing the technique of spherification, turning liquids into little balls that resemble caviar, and beginning to toy with soy lecithin.

“My time spent at El Bulli was one of my most beautiful experiences. It was a place where creativity was palpable. Every day new plates, new ideas and new concepts were both pursued and discovered,” he said.

“It is my opinion that in order for success to be maintained, [leaders] must always remain present in their place. Aside from very important obligations, Adrià was always present at El Bulli. Even if he tended to be an overly precise person, almost to the level of being a maniac at times, he was never rude. His success is also due to his ability to create, organise and collaborate with his precious staff.”

Adrià’s notorious impatience means he has little time for those who bring conflict or fail to turn up on time. José Andrés, a prize-winning chef who co-owns several Washington restaurants, tells how he was dropped because he was not at the exact spot in a bus station where he and Adrià had arranged to meet. Andrés had simply gone to find a phone booth to call Adrià.

‘Crazy boss’
Although many stagiaires worship Adrià, not all have loved him. “I didn’t leave with the best impression,” said Jeremiah Bullfrog, who now runs a mobile “gastropod” out of a 1962 Airstream trailer based in Miami. “Ferran was a crazy boss, yelling for everything and anything.”

“I think he is closing at a good time for him,” says Lisa Abend, whose book The Sorcerer’s Apprentices tracks the 2009 season at El Bulli. “He’s accomplished so much. What else is there for a chef to do that he hasn’t done? What motivates him is to be able to create. It is hard to do that if you have 50 people to feed every night. I think this is a very smart way to avoid burning out and stay in the game on his own terms.”

Like any great revolutionary, Adrià published his manifesto. Co-signed in 2006 by Heston Blumenthal and two others, it read: “We do not pursue novelty for its own sake. We may use modern thickeners, sugar substitutes, enzymes, liquid nitrogen, sous-vide, dehydration, and other non-traditional means, but these do not define our cooking. They are a few of the many tools that we are fortunate to have available as we strive to make delicious and stimulating dishes.”

That is the spirit he has pledged to carry into the foundation — which will research, teach and publish. Adrià originally said he would take several months off after shutting the restaurant doors, but it now seems the hyperactive Catalan will take only one week off before launching into his foundation.

But as Adrià prepares for the next phase of his life by devoting himself to kitchen creativity, the memory of the Schillings looms large.

“If they were alive now I am sure that they would be delighted with the foundation,” he told Spain’s EFE news agency. “Building up something like the El Bulli foundation would have been a natural wish for them.” – guardian.co.uk

The pain of reining in Spain