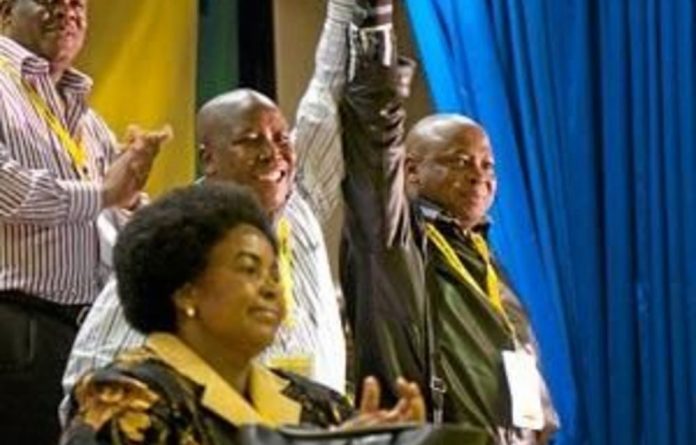 A group of politicians and businessmen close to Julius Malema and Limpopo Premier Cassel Mathale allegedly enriched themselves by being given privileged access to a municipal property sale in Polokwane.

The Mail & Guardian was told that in mid-2009 Mathale, Malema, provincial ministers and the businessmen “jumped the queue”, giving themselves first choice in buying certain plots and bypassing the public process.

This allegation, brought to the M&G by well-placed sources, has been roundly denied by those involved. Nevertheless, deed records reflect a long list of connected individuals who benefited from the sale.

The M&G recently revealed that On-Point holds a tender to administer a large part of the multibillion-rand budget of Limpopo’s roads and transport department.

In April 2009, the month after Mathale became Limpopo’s premier, Polokwane Municipality advertised in local newspapers that 115 residential plots, part of a suburb called Bendor, would be sold to the public on a first-come, first-served basis.

Those who were interested were invited to apply at the Peter Mokaba Stadium on an opening day and over the six weeks that followed. Their names would be registered on a database and those who registered first would be given the first pick of the Bendor properties.

The plots are in an affluent part of town, adjacent to a wealthy suburb called Ster Park, which locals have nicknamed “Tender Park” because its large, ostentatious homes are owned by powerful personalities, including Mathale.

Bendor is prime real estate, but because it was at the time unserviced municipal land that had never been on the market, the plots were sold for very tempting prices — between R309 000 and R426 000.

A source familiar with municipal property sales said: “When the municipality is going to sell properties there is normally very serious demand. The property is usually sold for much lower than the market price. Some people buy and sell at a higher price within a week.”

More than one independent, well-placed source told the M&G how members of the province’s “inner circle” — connected politicians, officials and businessmen — had first choice of the Bendor properties.

Allegedly, Mathale secured numerous properties, buying one in his name and the rest in the names of his family and associates.

Malema was reported to have bought a plot, as did Mathale’s partner, Manthata, and the youth league’s Lebogo was alleged to have “co-ordinated” another group of properties to benefit those close to Malema and Mathale.

“Almost all the MECs [provincial ministers]” were involved, the M&G was told, although not all of them eventually bought plots.

According to the municipal advertisement no person could buy more than one plot, so “double transfers” were used in many cases to obscure the identity of some buyers.

For the inner circle

A recent search of the deed records for Bendor reflected that not all the alleged queue jumpers, Malema included, had taken transfer of the properties. But this does not necessarily mean they did not benefit. To date, only 38 of the 115 properties have been officially transferred to buyers’ names. Of these, the M&G picked up 15 sales that stood out as benefiting connected people.

Using a double transfer similar to those characterising the Bendor sales Malema bought a property in neighbouring Ster Park — one road away from Mathale — three years earlier.

According to deed documents, lawyer Matane Mphahlele bought the property from the municipality in July 2006. The following month, nine months before it was transferred to his own name, Mphahlele agreed to sell the property to Malema.

Mphahlele took transfer in April 2007 for R222 300 and on the same day the property was transferred to Malema for the same amount. The following month Malema signed an agreement to sell the property on for R680 000, showing how lucrative municipal property sales can be.

In an interview Malema said Mphahlele had been unable to raise the funds to secure the purchase: “The municipality was about to take the site from him. I said, ‘give it to me’, and he agreed. And I went to the municipality and said ‘I’m going to pay the land for Matane, but it must be a double transfer.’ They said, ‘No, this is his site. And it must be like he is paying for this site and then he can legally transfer it to me.'” The interview was conducted in the course of research for a forthcoming book.

Mphahlele could not be reached.

A man with multiple mansions

Julius Malema’s property portfolio is growing, with at least two new houses added to his list.

Malema recently admitted that he is a shareholder in Gwama Properties, which owns a house in Faranani Estate in the Bendor suburb of his home town, Polokwane. Gwama Properties bought the house in June last year for R1.37-million. Malema’s son and the mother of his child have since moved into it.

A second house in Bendor, this time in Quinn Street, was bought for R3.05-million in December 2009 by On-Point Engineering, which is co-owned by Malema’s family trust. The property is regularly used by Malema’s bodyguards and drivers.

Malema’s family trust also owns a 3.5-hectare farm on the outskirts of Polokwane, which he bought in June last year for R900 000.

A land claim was registered against the smallholding 10 months before Malema bought it.

The 30-year-old also has two residential homes, one in Polokwane and one in Johannesburg. He bought the former in 2006 partly with the proceeds of the sale of a site purchased from the Polokwane municipality months earlier.

In 2009 he bought his Johannesburg residence in upmarket Sandown for R3.6-million. He says friends and comrades assisted him with the R1.5-million deposit required.

Yet, less than two years after moving in, Malema demolished it. Earlier this year he relocated to a rented house in Morningside while work began on his new home, reportedly costing R16-million. His grandmother’s Seshego home was demolished at about the same time, to make way for a two-storey house.

Malema has suggested that more properties may soon be added to his portfolio, but refuses to give details — Fiona Forde