The Juju rioters — bored with no hope for the future? 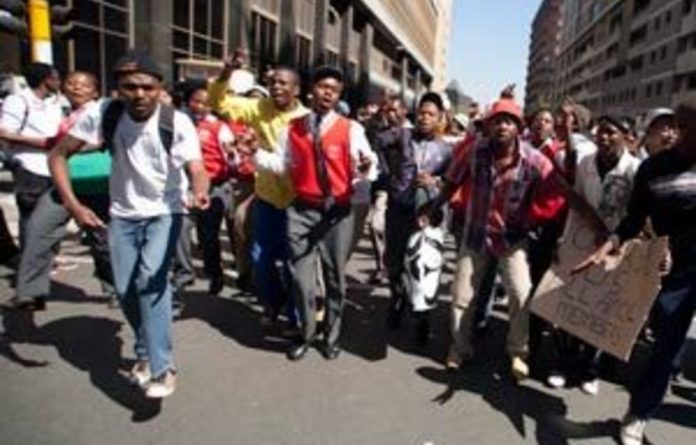 While having my hair done at a salon in Braamfontein on Tuesday afternoon I watched an eNews report about the demonstrations outside Luthuli House in support of ANC Youth League leader Julius Malema. The report said that the Congress of South African Students (Cosas) had rounded up students from various schools to join the protests in the Johannesburg CBD.

Hundreds of Julius Malema supporters gathered in the streets of Johannesburg today as Juju faced the first day of his disciplinary hearing. Journalists and police were pelted with rocks and other debris, and T-shirts bearing Jacob Zuma’s face were burnt.

The salon owner and hairdressers told me how, minutes before my arrival, a gang of children in school uniform burst into the salon, saying they were going to “loot” it. The teenagers also announced that they were on their way to join the Malema protest.

The school children were told to leave by these strong women. They then decided to loot the small spaza shop next door.

Later that night, eNews carried another report with a statement from Cosas denying they had encouraged pupils to participate in the protest. Further reports claimed that some pupils had come to the demonstration just to check what was happening. They didn’t really know what it was all about, but they joined in anyway. Footage showed clearly identifiable students in their uniforms, running rampage as they threw stones at police vans and journalists.

During the Molemo “Jub Jub” Maarohanye trial, similar incidents took place. There were reports of pupils looting stores in and around Protea Glen on their way to and from the magistrate’s court. Hundreds of students camped outside the court for hours, sipping frozen lollies and looking bored. I was there when emotions rose and they began throwing stones at the police.

It would be easy to dismiss such actions with contempt. But our country is rooted in a history of protest culture, and children only emulate what they see. Less than a month ago strikers from the South African Municipal Workers’ Union (Samwu) were seen rampaging through the streets of Cape Town. They didn’t just overturn dust bins. For the first time in a Samwu strike, stores were looted and property was set on fire. Analysts spoke of parallels with the recent London riots.

Veteran journalist Max Hastings wrote an article for the UK-based Daily Mail. The headline said it all: “Years of liberal dogma have spawned a generation of amoral, uneducated, well fare dependent, brutalised youth”. Hastings described the London rioters as “illiterate and innumerate, with some dexterity for computer games and BlackBerries”. He suggested that young people in UK have no values, skills, solid family foundation or suitable role models, with nothing to which they can aspire. The result? No pride in their country — nor in themselves.

Could this also be true of South African youths?

This week’s events have made one thing clear. Malema has a large following among impressionable young people who are not interested in political dogma. They don’t care about his philosophy. But for them he has duel-celebrity status. He’s a political figure who champions the poor — and a party-goer who hangs out with the rich and famous. He doesn’t only appeal to vulnerable youth, he also entices them.

Recently, Move magazine published a fashion exposé on what Jub Jub has been wearing to his trial hearings lately. In a colourful collage, they tagged his sunglasses, suits, shoes, ties and cornrows with exorbitant prices from R700 to R8 000. It proved that the rich get away with murder — in style.

Which raises the question: what kind of value systems does all this instil in young people?