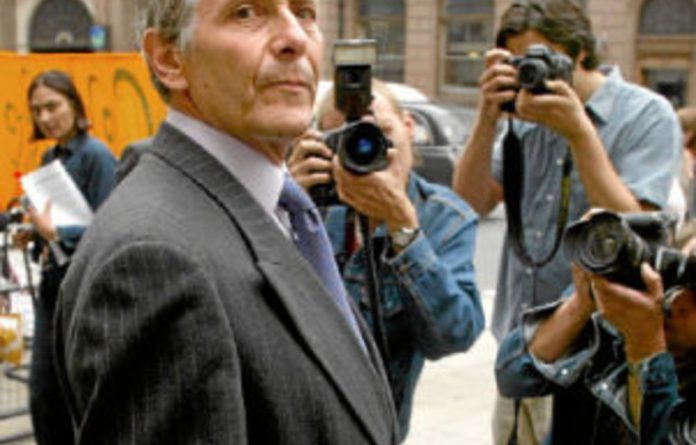 The British business community may be under threat in Zimbabwe, but one billionaire is flaunting his growing influence.

Nicholas van Hoogstraten, long a mythical figure in Zimbabwe, has emerged in recent months to wage a series of corporate battles that have highlighted his clout — and the contradictions of President Robert Mugabe’s black empowerment rhetoric.

At a time when other foreign businessmen have taken to appeasement and cowering in fear, Van Hoogstraten, who claims a personal friendship with Mugabe, can call on the favours he has given out over the years to protect his interests, ranging from hotels to Zimbabwe’s biggest coal company.

In June, at a meeting for shareholders in Rainbow Tourism Group, the country’s second-largest hotel company, Van Hoogstraten, in pink shirt and white jacket, berated management for its “incompetence”.

He demanded that the board be sacked and replaced by his nominees, including his sons, Alexander and Maximilian.

After shareholders voted against him, cheers erupted from the floor.

“This is a victory for empowerment in this country. We can’t have one man holding us to ransom all the time,” said Paddingtion Japajapa, a black empowerment campaigner. “Van Hoogstraten wants to be everywhere. He is using the money that they stole from us in Rhodesia to suppress us.”

But among top government figures, state companies and big businesses, Van Hoogstraten has a different image. He is the go-to guy for loans. “I am the lender of last resort,” he boasted recently.

In a fix
Everyone in Harare knows where to go when they find themselves in a financial fix, he said. “People come here on their own looking for money. I don’t even advertise. They look for me.”

State enterprises line up at his door, giving him more leverage. Troubled Air Zimbabwe approached him in June, asking for a $2-million loan.

He has called Mugabe “a true English gentleman” and “100% decent and incorruptible”.

In 2006 he showed journalists documents allegedly reflecting a $10-million loan to Mugabe from Messina Investments, the company through which he holds most of his assets in Zimbabwe.

He recently pushed through board changes at Hwange, the largest coal producer in the country, in which he has a 31% shareholding. He claims to have donated the 36% that government holds in the colliery.

Nobody knows how much Van Hoogstraten is worth. He calls himself the largest individual investor on the Zimbabwe Stock Exchange, where stockbrokers who handle some of his transactions say his investments are valued at $250-million.

While white farmers were losing land he was increasing his holdings in estates and wildlife conservancies.

He owns a string of commercial properties and apartments and is the only known white businessman to own a string of township houses.

His confidence in the protection he enjoys was shown recently when he dismissed Finance Minister Tendai Biti as “foolish” for criticising his dealings.

He has mentored a network of young businessmen to do some of his heavy lifting.

Among them is Frank Buyanga, who has a plush apartment at Sandton’s Michelangelo Towers and is fond of speeding around Harare on weekends in pricey cars that include a $200 000 Aston Martin DB9, a Rolls Royce, a Bentley and a Lamborghini.

“Generally, Van Hoogstraten is misunderstood. I can say without a shadow of doubt that he has love for Zimbabwe and its people — He speaks highly of our president and shares his vision of total empowerment,” Buyanga said.

In contrast Van Hoogstraten is known for his frugality. He has a Range Rover Sport — a gift from Buyanga, he says — but uses a Jeep Cherokee from the 1990s.

Claiming to have built a £40-million palace in England “to house my paintings”, he lives between a cheap hotel room and a plain suburban house and maintains he is prepared to live in the township.

Van Hoogstraten declined to give an interview to the Mail & Guardian, saying that in recent weeks he had given sufficient comment to the media on his affairs.