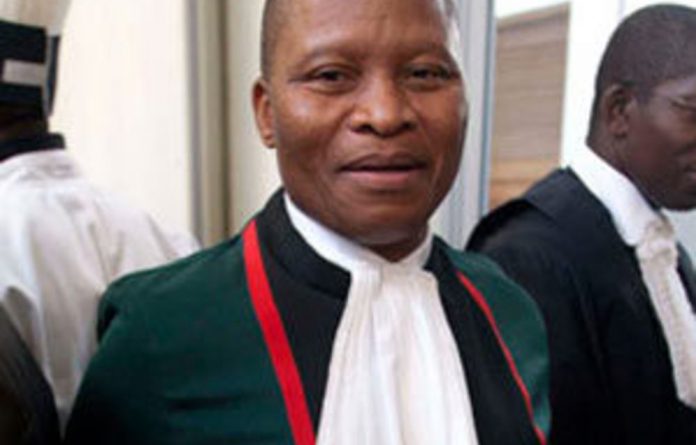 Chief justice nominee Mogoeng Mogoeng blasted his critics and rigorously defended his record as a prosecutor and judge before his interview with the Judicial Services Commission (JSC) on Saturday morning.

“There have been suggestions from some commentators, notably the Eastern Cape Bar Council, the Johannesburg Bar Council and the Cape Bar Council, that I lack the requisite experience for appointment to the position of chief justice,” Mogoeng said, reading from his written submission to the JSC.

“The only two judges on the Constitutional Court who have had a longer period of judicial service than me are Judges Froneman and Cameron.

“Apart from this I have been a Judge President for seven years, whereas none of my other colleagues at the Constitutional Court has been permanently appointed to lead a Division, small or big.” Mogoeng said.

Homophobic comments
“They have compared these cases to a case involving indecent assault on a man where I expressed the view that the sentence imposed was too lenient, to suggest that I care more about men than I do about women.

“What the commentators have deliberately failed to draw to the attention of the Commission is that I have presided in at least seven other cases involving rape of women in which I imposed or confirmed substantial periods of imprisonment, ranging from 10 years to life imprisonment.”

“It has been alleged that I am homophobic. This allegation rests primarily on three grounds, namely — the fact that I dissented from paragraphs 181 to 189 in the CC Judgment in Le Roux v Dey — the absence of my reasons for dissenting and — the attitude of my church, Winners Chapel International, on homosexuality.

“The Constitution guarantees every South African freedom of religion, belief and opinion. In the exercise of this right, I have fully embraced the Christian faith.

“I did and do so mindful of the fact that our Constitution was not meant to benefit Christians to the exclusion of all other people who either belong to other faiths or do not subscribe to any religion at all.”

Defending the church
Mogoeng said his church’s opposition to homosexuality was not “something peculiar to it”, nor did the church have as its core value, the attitude that “homosexuality should not be practiced, or is a deviant behaviour”.

“It is based purely on the biblical injunction that a man should marry a woman and that there shall be a husband and a wife.

“The opposition to homosexuality is not therefore, a sine qua non for the existence of Winners Chapel International. The position it has adopted in this regard is similar to that of almost all Christian churches and religions, to which many other judges belong.

“It is unlike, for example, the Klu Klux Klan, whose core value is racial supremacy. The core values of our church relate to Biblical teachings and the church is not founded on homophobia. It is founded on the Holy Bible.”

Mogoeng said he had been criticised for not recusing himself when his wife appeared before him on appeal in a matter that was set aside by the Supreme Court of Appeal.

“Whenever she appeared before me in appeals, I made it a point that counsel knew that she was my wife and left it to counsel to clear up the matter with their clients.

“In the circumstances, the fact that I sat in a case in which my wife appeared does not show that I have no regard for judicial ethics.”

‘I’m old enough’
Mogoeng said there was nothing wrong his age of 50.

“The President of the Federal Constitutional Court of Germany, Honourable Andreas Vokuhle, was 46-years-old when he was appointed to that position.

“The Chief Justice of New Zealand, Honourable Dame Sian Elias, was 50 years old when she was appointed to that position.

“I cite these examples to show that age is not a decisive factor. What matters is one’s experience.”

Mogoeng also defended his record on pushing for the death penalty while he was a prosecutor in Bophuthatswana.

“Somebody had to prosecute persons accused of the murders, robberies and gruesome rapes of innocent victims of violence, even during apartheid. And I did. For that I have no regret, just as I am not apologetic for the bursary that the Bophuthatswana government assisted me with.”

He said while he was employed as a High Court — then Supreme Court –prosecutor, his political standpoint was known by his boss, Advocate J.J. Smit.

Not a puppet
For that reason he was once allocated a political trial — the State v Ngobenza.

“When an urgent application for the stay of execution in the matter of before Theal Stewart CJ, my boss, Advocate J.J. Smit SC, assigned the duty to oppose the application to me, and I did.

“At the time the death penalty had not yet been abolished. It was the law. The new Constitution did not exist.

More importantly, Makwanyane had not yet been decided in favour of abolishing the death penalty.

“It may interest you to know that in 1992 or 1993, my former boss and I were on radio against each other. He presented argument for the retention of the death penalty and I was arguing for its abolition, based on what I had learnt from my Masters programme about the effect and cruelty of the death penalty.

“There is therefore no substance in the suggestion that I was some kind of an agent or puppet of the apartheid machinery,” said Mogoeng.